Is it time for Reds to call up Nick Senzel? 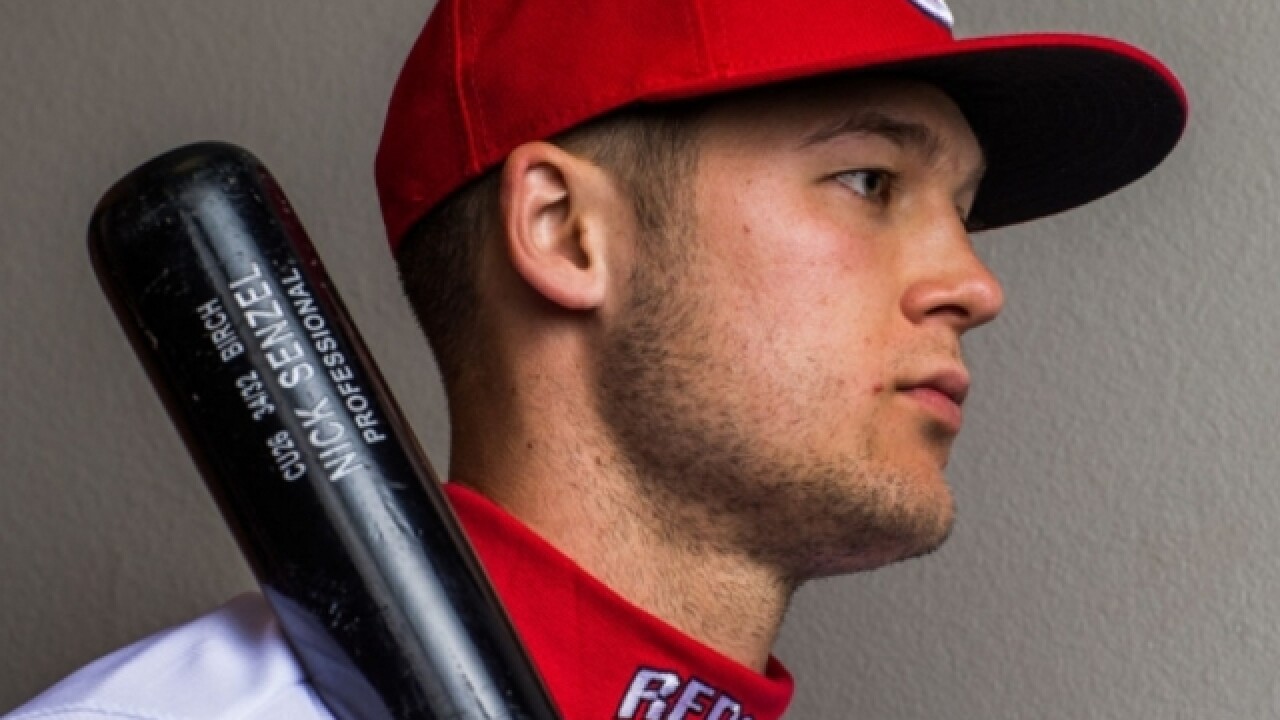 Copyright 2018 Scripps Media, Inc. All rights reserved. This material may not be published, broadcast, rewritten, or redistributed.
<p><br /> \GOODYEAR, AZ - FEBRUARY 20: Nick Senzel #79 of the Cincinnati Reds poses for a portrait at the Cincinnati Reds Player Development Complex on February 20, 2018 in Goodyear, Arizona. (Photo by Rob Tringali/Getty Images)</p>

CINCINNATI - Is now the time to bring up Nick Senzel? Is he ready?

There seems to be ongoing debate on this subject within the Reds organization. On Sunday morning, manager Bryan Price indicated he’s in the “bring him up now” camp.

“I think he could help us,” Price said. “There's also the argument that the people that see him on a regular basis and know him better than I do need to feel that he's ready.”

The general consensus has been that we would see Senzel in Cincinnati at some point this season. However, it wouldn't be before April 13 to ensure an extra year of team control of the infielder, who now won’t accrue a full year of major league service in 2018 whenever he’s brought up.

But the timeline for Senzel has accelerated since Reds third baseman Eugenio Suarez had his right thumb fractured by a pitch from Pirates’ right-hander Jameson Taillon on April 8 at PNC Park.

Senzel, who began his first Triple-A season playing second base, moved over to third base following Suarez’s injury, prompting speculation that a promotion was imminent.

He batted .315 with 21 homers, 105 RBIs and a .393 on-base percentage in his first two minor-league seasons, which included stops in Class A Billings, Dayton, Daytona and Double-A Pensacola.

Triple-A, however, has been a different story.

It’s still early in Louisville’s season and he has been swinging the bat better of late, but Senzel endured an 0-for-16 run with five Ks in one four-game stretch. Senzel, who went 1-for-4 on Sunday, is now batting .233 with a .283 on-base percentage in 10 games at Triple-A. He hit his first Triple-A home run on Saturday.

“Senzel had a good start,” Price said. “I think he had four hits in his first two games. He played some second base. He's gone over to play some third since Geno got hurt. He scuffled a little bit with the bat. He's made better contact the last day or two. He plays with his hair on fire. He plays hard."

Senzel was rated the best pure hitter in the 2016 draft when the Reds selected him No. 2 overall, making him the franchise’s highest draft pick since they selected shortstop Kurt Stillwell at No. 2 in 1983.

And Senzel didn’t disappoint in his first two professional campaigns, earning the Sheldon “Chief” Bender Award as the organization’s Minor League Player of the Year last season after ranking second in hitting and fourth in RBIs among all Reds’ minor leaguers.

The prognosis is better for Suarez, who could return by early May, which could alter the club’s thinking on Senzel. But, after a 2-13 start which is the Reds’ worst since the 1931 team started 2-17, the pressure is mounting on Price and the organization as a whole to show some measurable progress in the rebuild.

Fan frustration reached a boiling point when Price indicated following Suarez’s injury that 29-year-old Phil Gosselin and 33-year-old Cliff Pennington would share time at third base. The Reds did promote former first-round pick Alex Blandino on April 9 and he has made three starts at third.

But none of these options has worked very well.  Reds third basemen are 1-for-29 with three errors since Suarez's injury, including Blandino's 0-for-4 on Sunday. Pennington and Gosselin are not considered to be part of the Reds’ long-term plans.

Suarez, who has developed into one of baseball’s premier third basemen, especially defensively, signed a seven-year, $66 million contract with the Reds in March, with a team option for 2025.

With third base seemingly locked up through at least 2024, Senzel began the season at Triple-A playing second base after working out at shortstop in spring training under the tutelage of Hall of Famer Barry Larkin.

The Reds’ infield, once among baseball’s most stable and talented position groups before Todd Frazier, Zack Cozart and Brandon Phillips left, now is a fluid situation.

Suarez is a natural shortstop who moved to third after Frazier was traded and has excelled there. Jose Peraza was thought to be the answer at either short or second, but the jury’s still out on him.

Senzel has embraced every challenge he has faced in his brief minor-league career, and despite moving around the infield, his offense hasn’t suffered aside from him making the anticipated adjustments to Triple-A pitching.

While the Reds’ organization has taken a deliberate approach to most personnel moves during a rebuilding process that has entered its fifth season, there is increased urgency to hand the keys to the kids.

Top pitching prospect Hunter Greene is still a couple of seasons away, while the young Reds pitchers who are in the major leagues still are finding their footing at this level. But with the team off to a historically poor start, Senzel represents a future that many Reds fans are tired of talking about.

Senzel turns 23 in June. He’s the No. 7 overall prospect in baseball, according to Baseball America. He is no longer under service time constraints but has played in only 196 minor-league games through Saturday.

With Suarez back in a few short weeks and the Reds’ rebuilding process still a work in progress, what better serves Senzel and the organization: rushing him to the big leagues as a fill-in third baseman to help halt an early-season losing skid or giving him more at-bats at Triple-A to refine his swing and approach to prepare him for a longer-term stay with the big club?

It’s a decision not being taken lightly in the Reds’ front office, especially for a player they hope is their version of Kris Bryant.

"We're an organization, we're not one person,” Price said. “This is not a situation where one person gets to say, 'This is what happens.' It is a decision that's made by a lot of people for a lot of varying reasons. I think that's where I stand on it. When that time comes, I think that we could see him here, especially with Geno out."