As autumn approaches, still no sidewalk to school for 10-year-old Madelyn 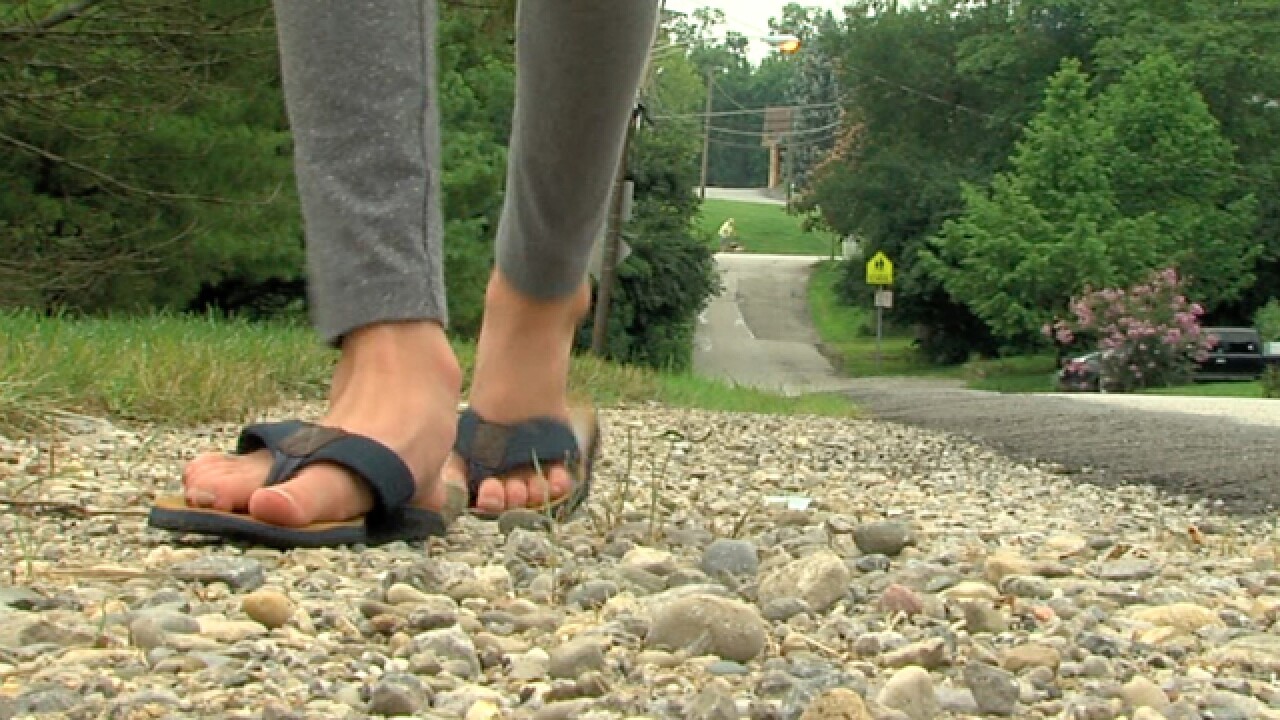 Copyright 2018 Scripps Media, Inc. All rights reserved. This material may not be published, broadcast, rewritten, or redistributed.
Ryan Heeter | WCPO 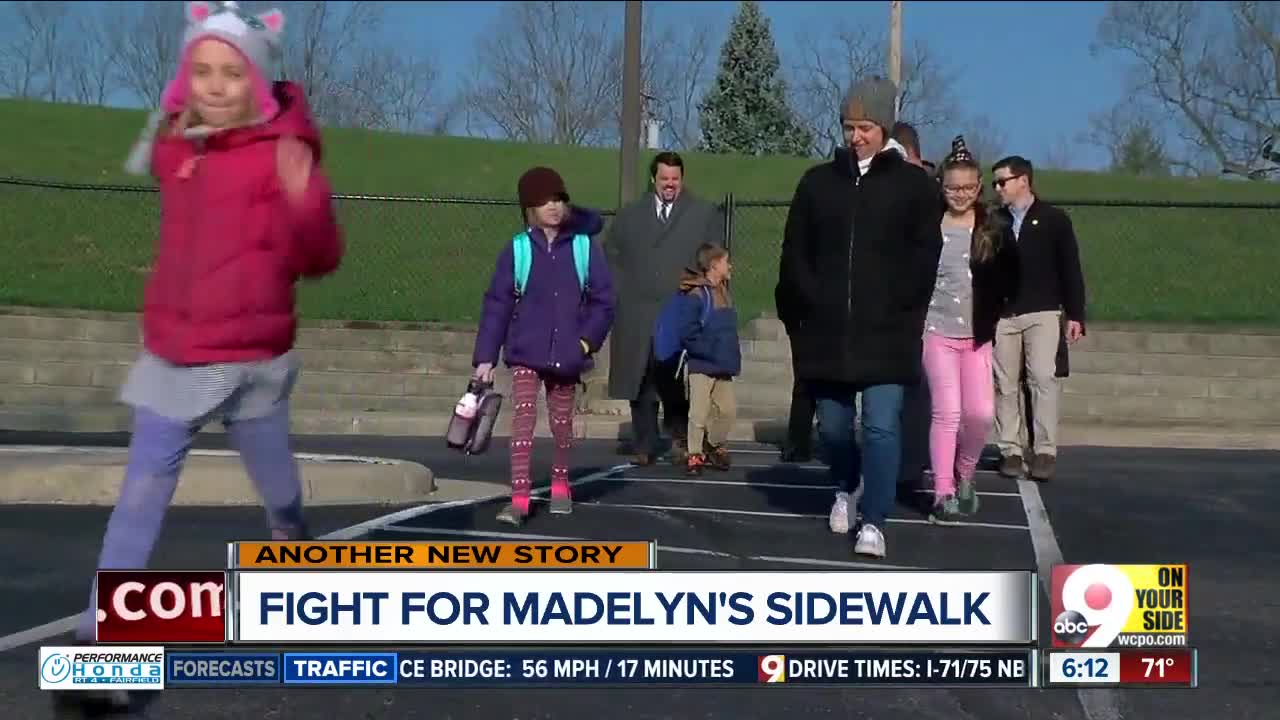 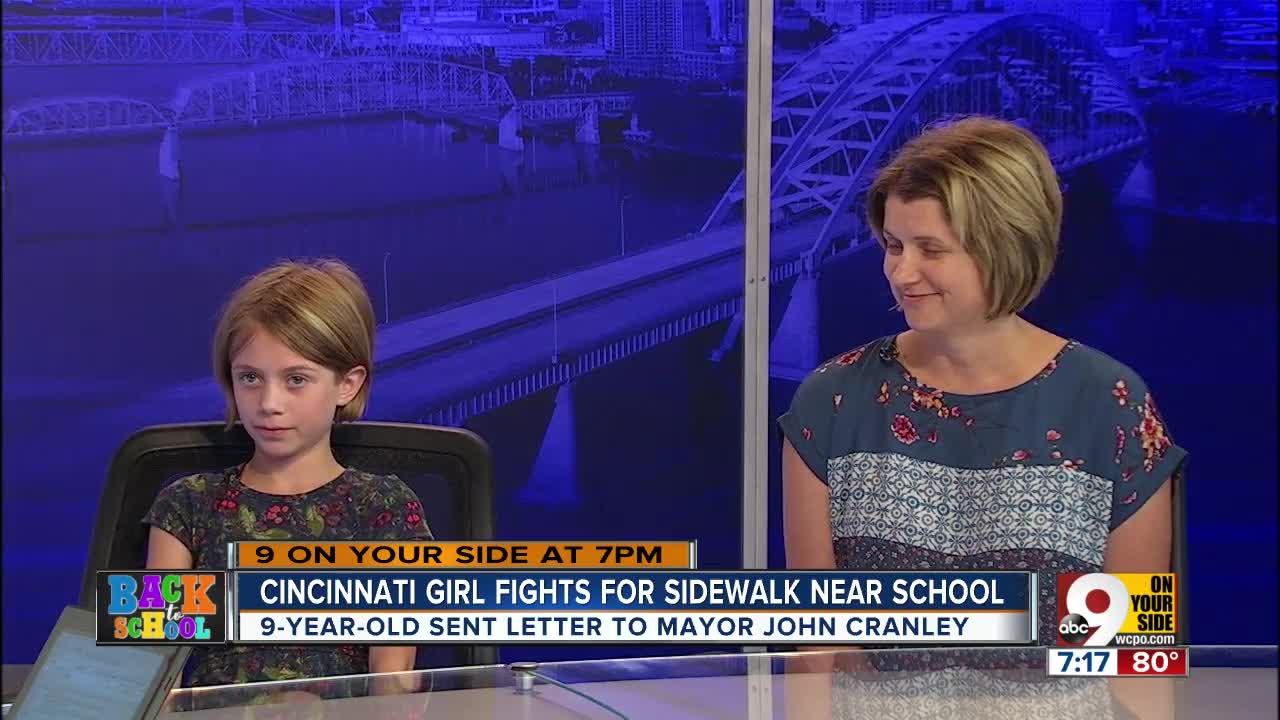 CINCINNATI -- In little more than a week, soon-to-be 10-year-old Madelyn Gerker will walk down Sussex Avenue to Corbly Road for her first day of fifth grade at Sands Montessori, accompanied by her younger brother and sister.

A lot of new things come with the first day of school -- new classes, new teachers, sometimes even new friends.

There's just one thing that hasn't changed for Madelyn since her fourth-grade year ended in the spring: She, her siblings and their neighbors on Sussex still don't have a sidewalk to get to and from school every day.

It's less than a quarter-mile to school for the Gerkers, but it can be an intimidating walk.

"Sometimes when a car is coming, we either slow down or stop," Madelyn said. "The cars come really close to us, especially if there are two cars trying to come from different ways."

In addition to the lack of sidewalks, the speed limit sign -- indicating 25 miles per hour -- is difficult to see behind trees and brush for drivers turning onto Sussex from Corbly. Madelyn and her mother, Heather, agree: Sometimes cars go too fast.

"It's a sidewalk to school that many families will be using, so it's a big matter of safety for many children," Heather Gerker said.

It all started with a letter

Madelyn's problem first hit the public eye in March, after she wrote a letter to Mayor John Cranley and City Council.

"I am writing to you because we need a sidewalk," she wrote, underlining the word "need" twice.

"A couple months ago my brother Henry almost got ran over by a bus."

Madelyn's letter got a quick reaction by the standards of city government. About a month later, representatives from the Department of Transportation and Engineering, along with aides from some City Council members' offices, visited the Gerkers' home on Sussex Avenue to survey the area's needs regarding a sidewalk.

However, the process has proven longer and more involved than either Gerker -- child or adult -- imagined.

"I had no idea what was involved in getting a sidewalk," Heather Gerker said. "I didn't think it would become such a big project."

Madelyn's take on the situation: "It's frustrating."

Throughout her summer break, Madelyn has been busy.

"We went to a lot of meetings -- I wrote a lot of letters," she said, referring primarily to Mount Washington Community Council meetings and other meetings with city officials.

"She hasn't missed a meeting," Heather Gerker said. "In fact, she's gone without me to a couple because I work. I haven't been able to go, and a friend who's on community council has taken her. She's walked with folks down the street when I haven't been there.

"She's been to more meetings and conversations than I have been."

When Madelyn met with Cranley after he received her letter, she said, he told her "that he wanted to get the sidewalk, but it was just the paying that would be trickier to find out."

To that end, city engineers spent their summer break exploring design, cost and funding options. That's about all they've been able to do.

Vickrey told City Council's Neighborhoods Committee during a July 30 hearing that the city "reached out to a number of our outside grant funding agencies to see if they were able to participate at any level," but that the city did not have the budget to cover the full cost of the sidewalk.

"We also looked from an administration standpoint and said, 'Do we actually have the cash on hand to do something?' We didn't," he told the committee. "There's a number of individuals throughout the city that have requested sidewalks be on their streets. We just don't have the ability to do that."

Grant opportunities were turning up dead ends, too, Vickrey said.

The city reached out to the Ohio Department of Transportation's safety grant programs. "Unfortunately, they said that we would not be a good candidate for that," Vickrey said.

They looked at federal grants, like the Transportation Alternatives grant program, but "those particular funds would not be available until fiscal year 2023."

Even the Safe Routes to School program was out of the question: "Those particular funds would not be available until late 2022 if we were to apply. We'd just missed the application deadline in March."

More than just walking to school

One option still on the table: have residents living on the street pay for it through an assessment. With an assessment, residents would cover between 80 percent to 85 percent of the cost.

Heather Gerker said she doesn't consider that an option.

"I get angry when I think of a way to put a sidewalk in is this forced assessment or assessment on neighbors, when the sidewalk is specific to safety for children and families," she told WCPO. "It's a sidewalk to school that many families will be using, so it's a big matter of safety for many children. It is a responsibility of the city to keep people safe."

The assessment would apply to the six property owners whose residences face Sussex Avenue. Gerker said that is an unfair burden: "It's so ridiculous and unfair that this safety issue for a large amount of people and children and families is falling on the heads of a couple of people."

"It's not even just a matter of walking to and from school. There's a lot of foot traffic on this street. Not a lot of people know that this is a street that connects to a really large subdivision with over 600 homes in it," she said. Families living on nearby Kenlee Drive, Coveyrun Street and Copperleaf Lane walk along Sussex, too, to get to Corbly Road, she said.

Also sitting along Sussex Avenue is Corbly Trace, an apartment complex for seniors. Even though the entrance is on Corbly, Heather Gerker said she sees their residents using Sussex frequently.

Given a lack of grant opportunities, she and other supporters said they are working with the city to identify firms or organizations that could donate materials toward construction.

"One option we're most excited about and we're working the hardest on is finding folks and organizations that are willing to help through donations," she said. "We have almost secured a company who's donating all of the supplies, so now we're working on finding a contractor that we'll partner them with.

"The city has been really helpful in saying, 'We will support the process,' as well as the community council here in Mount Washington."

Heather Gerker hopes moving through this process will be just as educational for others as it has been for her and Madelyn.

"Hopefully we'll get that sidewalk, and we'll celebrate it," she said. "But I don't want (Madelyn) to think, 'I got what I want. Now I stop.' It's not just about her. She knows that, but I want her to see it. I want her to see that we can keep going and there can be more."

Classes at Sands Montessori -- along with all Cincinnati Public Schools -- will resume Aug. 15.