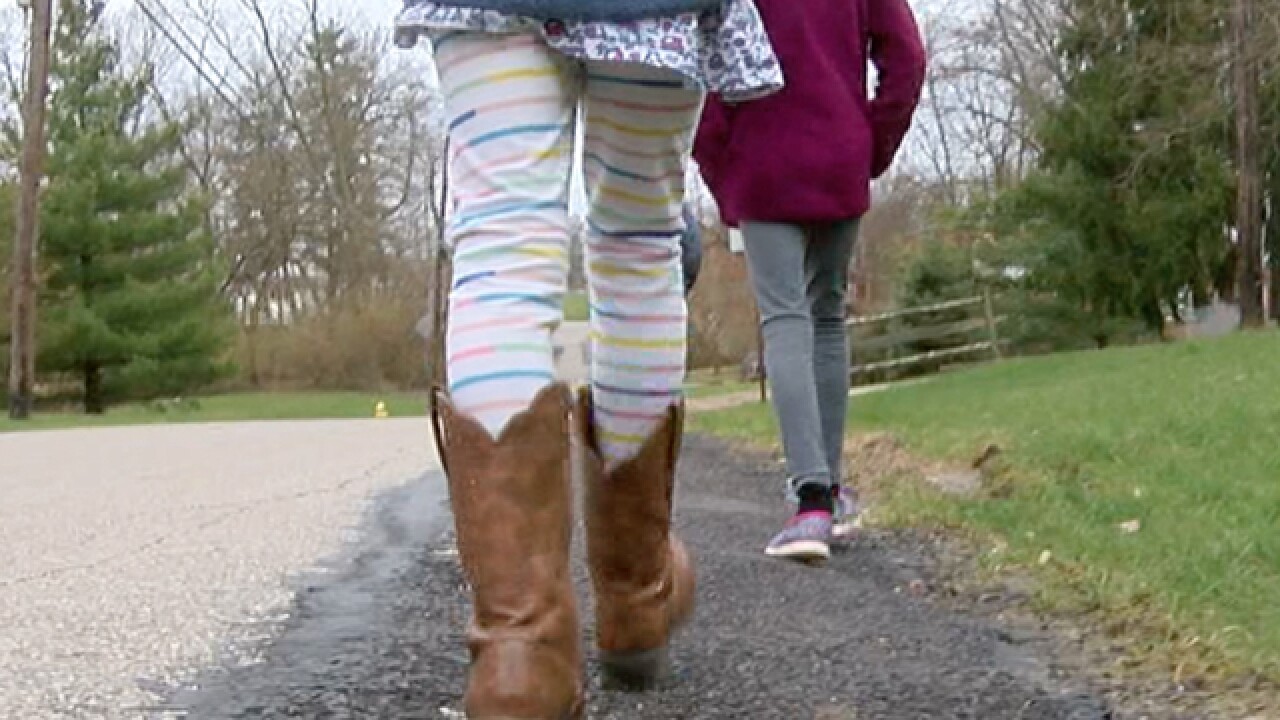 Copyright 2018 Scripps Media, Inc. All rights reserved. This material may not be published, broadcast, rewritten, or redistributed.
<p>The Gerker siblings walk along Sussex Ave. in Mt. Washington on their way to school. The street has no sidewalk. (Briana Harper/WCPO)</p>

CINCINNATI -- Over the last three weeks, young Madelyn Gerker has captivated the attention of the mayor and City Council with a humble, hand-written letter asking for a sidewalk on her Mount Washington street.

But really it has been an effort three years in the making.

"It's funny. We started this process about three years ago when Madelyn had asked about why we don't have a sidewalk," said the 9-year-old's mother, Heather Gerker. "We thought, 'Well, that's a really good question.'"

It took less than a week for Madelyn's letter to prompt a city council member to file a motion asking for the administration to apply for federal funding to provide the sidewalk.

Tuesday morning, multiple representatives from council promised to accompany the activist fourth-grader and her younger siblings on their walk up Sussex Avenue to Sands Montessori.

No city elected officials showed up, but representatives for Mayor John Cranley and council members P.G. Sittenfeld and Greg Landsman were there, along with officials with the Department of Transportation and Engineering and the Mount Washington Community Council.

"We just wanted to walk, see what exactly is encountered every day by the children that are walking it," said the city's principal engineer, Bob Vickrey.

Vickrey said his "back-of-the-napkin" estimation puts a new sidewalk on Sussex as costly as $200,000. That's because Sussex is one of the city's older streets that does not have the curb and drainage infrastructure already installed to accommodate a new paved surface.

"It's not just putting sidewalks on there," Vickrey told WCPO. "You have to do the curb work, end up working with storm water, all different issues."

Vickrey said he's hoping funding from the Ohio Department of Transportation and other grant programs could help pay for the new sidewalk.

Meanwhile -- regardless of the outcome -- Madelyn's parents hope the experience will be an educational one for the fourth grader.

"My hope for her in learning is to understand that, when you want something, keep trying," Heather Gerker told WCPO.

The Gerkers' efforts to get a sidewalk outside their home began three years ago, when Heather wrote her own letter to City Council.

"I went straight to City Council first and I wasn't getting any responses at first, and kind of gave up," she said.

Not long after, Madelyn spoke up.

"Then Madelyn brought it up again: 'Mom, why'd you give up?' And I said, 'I don't know what to do next,'" Heather said. "And then I thought this could be a really good learning opportunity."

Before reaching out to city council, Madelyn took her concerns to the Mount Washington Community Council, her student council and other students who live on Sussex, to try to garner as much support as she could.

"The community council has been so supportive through this whole process," Heather said.

Heather reflected on the power of her 9-year-old's voice in making such a simple request.

"With everything going on in the world right now, people are really listening to kids," she said. "They can be a lot louder at times, and I'm appreciative of that, and I think that's been part of why people have been listening to her.

"At the same time it's disappointing that that's what it's taken to get the responses we've gotten about the sidewalk."

While the end of the day, Madelyn doesn't want recognition, Heather said this process has instilled an interest in politics and government in the 9-year-old.

"Now she says she doesn't want to talk to anyone else unless it's the people who can give her a sidewalk," Heather said.