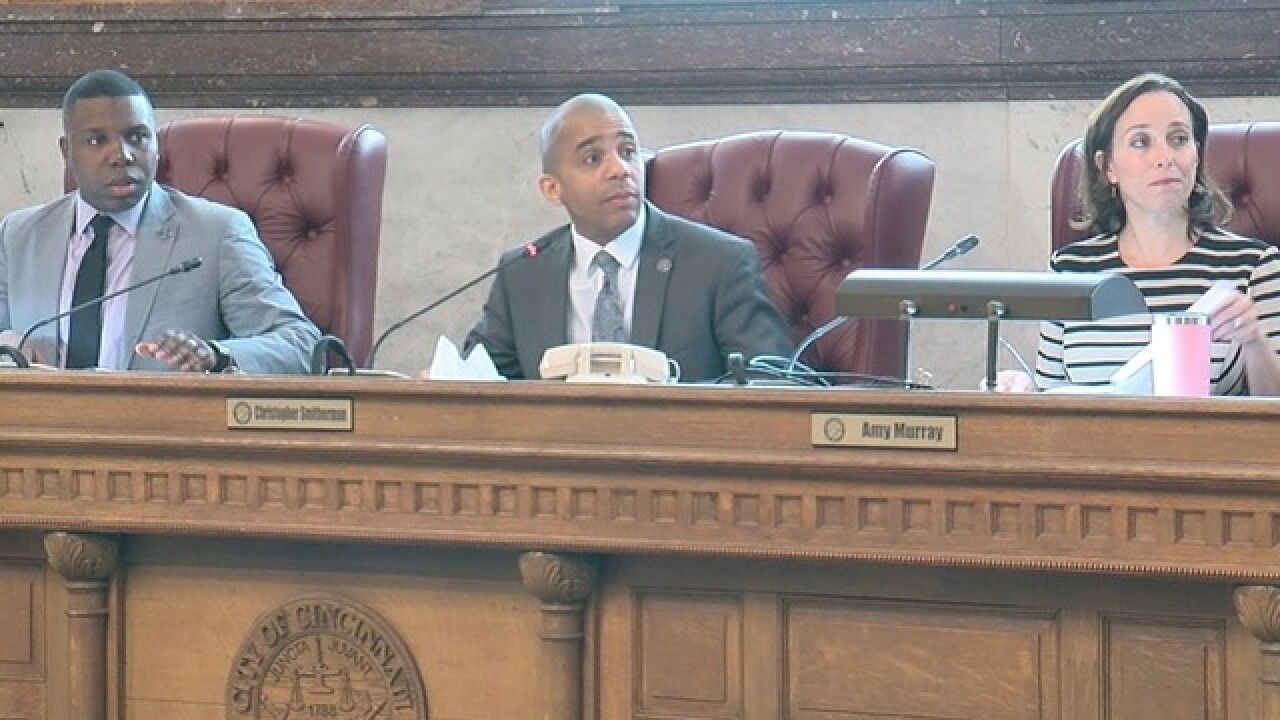 CINCINNATI -- City Manager Harry Black would get $423,767 in a severance package passed out of a council committee Monday morning.

If the full Cincinnati City Council approves it Wednesday, Black's term as city manager would end at 5 p.m. that day -- and bring to a close two weeks of conflict among top city leaders.

Still, it's not clear if the deal has enough votes. Cincinnati is facing a projected $23.4 million budget gap for the upcoming year. That could swing $6 million higher -- to nearly $30 million -- if income taxes continue to run short of expectations and S&P introduces a rate hike on the city's bonds.

The committee that passed the legislation Monday has only three members of the nine-member council -- independent Christopher Smitherman and Republicans Amy Murray and Jeff Pastor. Councilman David Mann, a Democrat, has also signaled support.

Five other Democrats -- Chris Seelbach, P.G. Sittenfeld, Wendell Young, Tamaya Dennard and Greg Landsman -- say they want an outside counsel to investigate claims of abuse and retaliation by Black. They also say they'd like Mayor John Cranley and Black to enter into mediation.

Murray argued the council majority's approach could be more expensive than the 18-month deal Pastor brokered over the weekend. If he were fired, Black would get less than half that -- eight months' pay.

"In the long run, (the deal) will save the city money," she said.

Pastor likened the deal to a severance package for a corporate CEO, saying they're "given all the time." Not long after he was elected, Cranley agreed to give then-City Manager Milton Dohoney a full year's salary -- $255,000 -- plus benefits, in exchange for Dohoney's resignation.

Smitherman argued a drawn-out "spectacle" could scare off potential candidates who might want the job next.

Three of those backing the deal -- Smitherman, Murray and Pastor -- are often viewed as the fiscal conservatives in city government. Dennard particularly took issue with that point in a Facebook post Monday, saying taxpayers shouldn't be on the hook for "hundreds of thousands of dollars every time we have a personality dispute."

"Do you know what that money can mean for our city? Particularly neighborhoods and communities that have been left behind? This is not fiscally in the best interest of our city," she wrote.

The city would also pay Black nearly $9,600 in deferred compensation for 2019.

The city would pay Black all accrued sick and vacation time, and pay for his health care costs for 18 months. Black will keep his city-issued cell phone and laptop. The city would also pay $6,000 in Black's legal fees, and give him a letter of recommendation.

The parties, including Cranley, agree not to disparage each other.

Black agrees to help defend the city in any future litigation.

"As a taxpayer, I take genuine offense that the souring of a relationship between two people should cost the taxpayers half a million dollars," he tweeted.

Cranley's accusations against his hand-picked city manager go far beyond clashing personalities: He claimed Black engaged in increasingly unprofessional, erratic behavior and made City Solicitor Paula Boggs Muething uncomfortable by talking about a strip club visit during a taxpayer-funded trip. The mayor said he was unsuccessful in getting Black to resign; he has not put forward legislation recommending Black's termination.

To some, issues of race and law enforcement loom large in the fight.

Dennard alleged the Cincinnati Police Department treats black and white officers differently, and that city government has been unwilling to address that disparity.

Cranley asked for Black's resignation the same week Black and Police Chief Eliot Isaac, both of them black men, were ousting Assistant Police Chief David Bailey, who is white. In a memo, Isaac alleged Bailey undermined an ongoing process to refresh the landmark Collaborative Agreement, originally reached as part of a settlement over allegations of racial profiling within the police department.

Some officers, Dennard said, "want to go back to doing business the way they used to and not having any accountability for their policing methods."

Through his attorney, Bailey denied he'd done any such thing. And Cranley denied Bailey's removal was his reason for wanting Black gone, and he has expressed support for Isaac.

But several organizations, including the Cincinnati chapter of the National Association for the Advancement of Colored People and the Black United Front, argue there are bigger issues in the police department that need to be investigated. They also accused Cranley of a "power grab" and say he has targeted numerous black leaders during his tenure.

"You need to call this thing what it is," activist Iris Roley said last week. "This is another black leader being lynched in the middle of the city at hands of the mayor."

The Black Agenda, headed by former mayor Dwight Tillery, is among the groups pushing back against Black's removal. Tillery and Cranley were once close allies -- Tillery was even co-chairman of Cranley's 2013 campaign. But then the two had a falling out around the same time a WCPO investigation raised questions about how Tillery's nonprofit, the Center for Closing the Health Gap, spent the taxpayer money it receives.

Black never changed the terms to the Health Gap's contract, despite concerns raised in 2017 city audit about lack of oversight.

A group of Cincinnati reformers successfully pushed through a new city charter in the 1920s to put a professional -- not political -- manager in charge of day to day operations. Smitherman thinks it might be time to end that system.

Voters could be asked to approve a charter amendment making Cincinnati a "strong mayor" form of government. In the current system, the mayor works with council to hire and fire the city manager. In a strong-mayor system, the mayor would have all executive power.

It's no secret Smitherman might run for the job.

"I would say we could structure it so the executive mayor kicks in down the road beyond me," he said. "I promise this is not about me. This is about doing what’s right for he city of Cincinnati."

Sittenfeld also has been mentioned as someone who might run for mayor in 2021. He said he'd like to see a lot more specifics before he decides whether he'd support a change.

"In terms of people who are trying to advance this conversation, the devil is in the details. A strong mayor situation can take many different incarnations. A manager situation can be tweaked," Sittenfeld said.

The Charter Committee, which pushed through the charter reforms 90 years ago, argues the current problem is with the people -- not the system of government. Bob Dehner, Charter Committee president, thinks voters could consider three other things: reforms allowing Cincinnati City Council terminate the manager, letting council go into executive session for personnel matters, and ending a pocket veto recent mayors have used to keep council from ever voting on legislation.

"You can't design a system that takes care of all different people combinations," CDehner said.