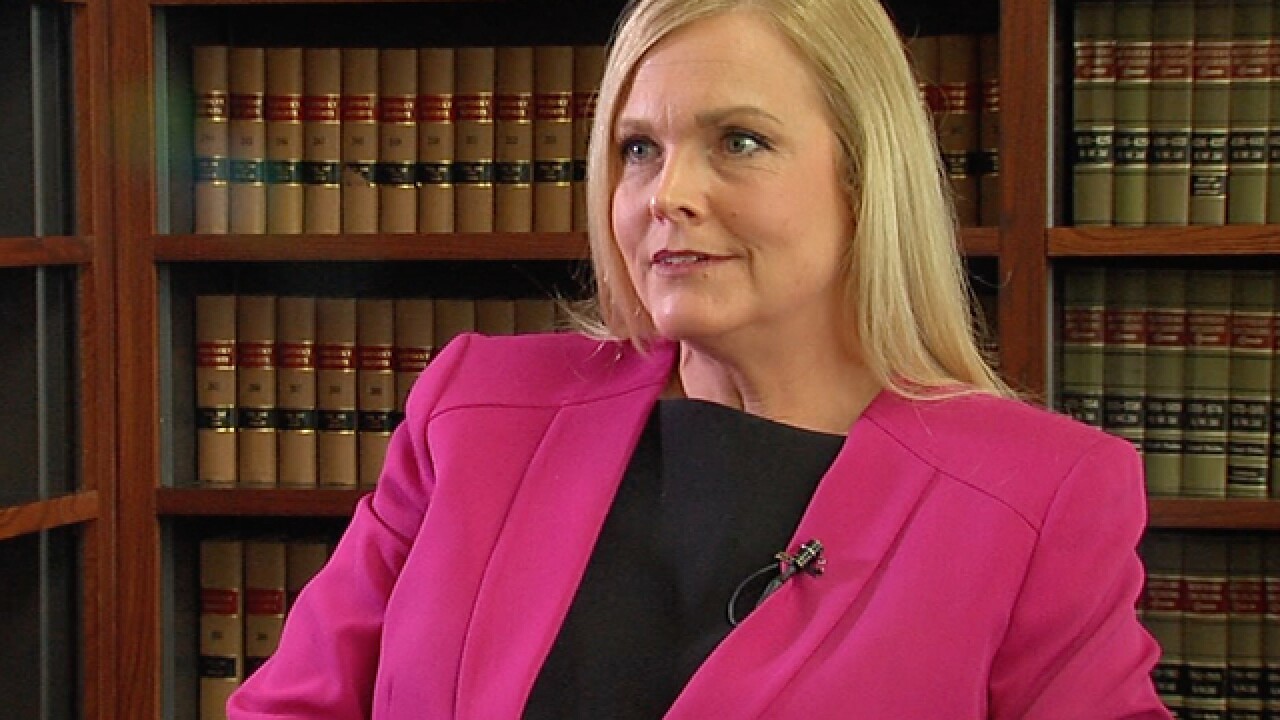 BURLINGTON, Ky. -- Commonwealth's Attorney Linda Tally Smith has faced accusations that she withheld evidence in a high-profile murder trial, a special prosecutor's probe into possible criminal charges against her and embarrassment over a sexual affair that became public knowledge.

Despite all that and opposition from some in her own party, she's running for re-election as the commonwealth's attorney for the 54th Judicial District, serving Boone and Gallatin counties.

"I haven't done anything wrong," Tally Smith said in an exclusive interview with the 9 On Your Side I-Team. "And, I have never given in to bullies. Never. That last thing that I will let my children get from this whole experience is that you back down and give in to bullies."

Tally Smith is a lifelong Northern Kentucky resident. She lives in Union with her husband, District Court Judge Jeff Smith, and their three children. She's a graduate of St. Henry District High School, Northern Kentucky University and the University of Kentucky College of Law. Tally Smith said it was her dream to prosecute felony cases. After working under another commonwealth's attorney for a few years in the late '90s, she won the race for 54th Judicial District commonwealth's attorney in 2000. Facing no opponents, she was re-elected in 2006 and 2012.

"Twenty-nine years ago, I had a light bulb moment that caused me to realize that this is what I wanted to do," Tally Smith said. "I have dedicated all of my energy professionally, and in many times personally, to becoming a felony prosecutor. I love this job. I love the work that I do. And I do a great job at it."

But events last year cast a cloud over Tally Smith's career. David Dooley, who had been convicted in 2014 of bludgeoning his coworker Michelle Mockbee to death at Thermo Fischer Scientific in Florence two years earlier, got new lawyers who said new video evidence in the case raised questions about his guilt. Tally Smith had prosecuted that case.

That evidence was a surveillance video showing a man approach a door behind the building the night before Mockbee was killed. Dooley's defense lawyers said prosecutors had failed to share the video with them during the trial, and they had never seen it.

A judge agreed to hear the defense lawyers' case. That was when Detective Bruce McVay admitted in court that he and Tally Smith had an affair beginning after the original trial, with him using the fake name "Carver Davidson" and her using "Chiquita Queen."

But McVay and Tally Smith disputed what happened with that video. McVay said he told her about the man and the video before the trial. Tally Smith had said he didn't tell her about man on the video until after the trial. Also, she said her office gave the video to the defense team three times, but they never went through it.

"The most important thing is the (building's) security was never breached," Tally Smith said. "So this random guy walking through the parking lot would not have been a big deal even if they let me know about it."

Dooley's lawyers had also obtained emails and texts between Tally Smith and McVay and an 18-page letter Tally Smith wrote to McVay but never sent.

"I get to live with the worry that someone on the defense side will find it at some point and that we'll all wind up in trouble over it and the entire case will be tainted over it," Tally Smith wrote.

Tally Smith said that letter was about a different case, in which a misunderstanding made her suspect McVay may have written something untrue.

"I was so upset with him at the moment that I wrote that letter, that I just assumed that everything bad that I had heard about him must have been true," Tally Smith said.

McVay has since retired. His attorney, Benjamin Dusing, told the I-Team last year that McVay also regretted the affair, but that he stands by the work he did.

Tally Smith said no other cases were affected.

Last May, a judge vacated Dooley's conviction, saying he's entitled to know about the person seen walking in the video. The judge also found the commonwealth's attorney's office did not intentionally withhold evidence.

"The judge's finding also includes a finding of ineffective assistance of counsel by his defense, because they did not take advantage of the opportunities to get help to view the video," Tally Smith said.

A retrial is still pending. Tally Smith won't be prosecuting the case again. The attorney general's office is taking over the case.

When the attorney general's office took over the Dooley case, it also appointed Shane Young, the Hardin County commonwealth's attorney, to examine Tally Smith's conduct and investigate if she committed any criminal wrongdoing. He asked Kentucky State Police to head up the investigation, so they're doing it.

Tally Smith has said starting an affair with McVay after Dooley's trial ended was a mistake, but not one that crossed the line into legal wrongdoing. She said the affair only became public knowledge because she saved files containing communication between her and McVay, and that she saved them because she knew she'd have to disclose the relationship if the Dooley case went back to court.

"All of the documentation reflects that," she said.

State authorities may agree that Tally Smith didn't break any laws. In a December letter to Assistant Deputy Attorney General Michael Wright, Young wrote that he and Kentucky State Police had finished "the majority" of the investigation and had "found no criminal conduct on the part of Commonwealth's Attorney Linda Tally Smith."

Both Young and Kentucky State Police told the I-Team there is no timeline for when the investigation might wrap up.

Tally Smith said it was her former law clerk who stole the emails, texts and unsent letter between her and McVay and ultimately caused them to become public.

That former law clerk, Nick Ramler, took 42,000 files off Tally Smith's "personal" folder on their office server in 2016, Tally Smith said. She said the files include the communications about her affair, and also volleyball schedules for her children and other items related to being the mom of three "very busy kids."

Tally Smith is suing Ramler in civil court, saying he tried to blackmail her. He has countersued, alleging violation of the whistleblower statute and defamation. He's also asking to add a libel claim over Tally Smith's election postings that say Ramler stole the files.

"I cannot stress the importance enough of the fact that Nick Ramler stole this stuff from my office on March 3, 2016," Tally Smith said. "He showed it to four licensed, practicing attorneys and they told him to do nothing with it. It wasn't until I had to sit him down to talk to him about his job performance that it became clear that he had an agenda."

She fired Ramler that September. They disagree on exactly what day that happened, and Wolnitzek said said they had never discussed any blackmail. Tally Smith said she fired Ramler for poor work performance.

Those civil lawsuits are still ongoing.

The negative attention has caused a rift between Tally Smith, a Republican, and the Boone County Republican Party's leaders.

Last May, the party's executive committee voted unanimously to call on Tally Smith to resign.

Tally Smith "has lost significant credibility in the legal community, and the people of Boone County have lost faith in her ability to carry out her duties appropriately and effectively," the committee said in a statement back then.

"We have very publicly called for her resignation and still stand 100 percent by that," Boone County Republican Party Chair Josh Walton said in an interview with the I-Team earlier this month.

She has refused to resign.

"I have not done anything wrong professionally. I have not been found to have committed any professional misconduct," Tally Smith said. "And I have not been charged, and I will not be charged with any crime because I didn't commit any crime. And so, for these people to call for my resignation under the circumstances, it's repulsive to me."

Neace and Tally Smith both worked for the previous commonwealth's attorney, Willie Mathis. Tally Smith said Neace as been "outspoken" since she first ran for office in 2000 because Mathis chose to support her.

Neace said that was not the case.

"When confronted about her behavior, she blames everyone else but herself," he said in a written statement. "Her attempt to deflect scrutiny away from her conduct is sad and a desperate attempt to hold into her office and power."

"I'm disappointed that she is still running," Kelly said. "But that's not my call to make, that's hers."

Kelly has lived in Northern Kentucky since 2004 and currently lives with his wife and their two children in Union. He's a graduate of the University of Kentucky and the Northern Kentucky University College of Law. Kelly is a partner at the firm Adams, Stelner, Woltermann & Dusing.

He said he feels Tally Smith "violated the public trust."

"This wasn't a mission of 'I have to be the commonwealth attorney,' but I felt very strongly that somebody else needed to be," Kelly said. "I feel like these offices are privileges, and if you engage in certain behaviors, you forfeit those privileges."

Tally Smith said Kelly and others are trying to "bully" her and her husband into handing over their offices.

"My opponent has run a purely negative campaign since the go," Tally Smith said.

Kelly said he believes "the public has the right to know when an elected official engages in misconduct."

"Throughout this campaign, I have gone out of my way to avoid talking about the personal aspects of Linda Tally Smith's actions that became public," he said in a written statement. "I have focused entirely on the areas related to her job performance. I reject any claims or insinuations that I have engaged in bullying."

Walton also said calling for Tally Smith's resignation "is not bullying or repulsive."

"It is the responsibility of each citizen to hold our elected officials to the highest standards of ethical behavior, especially as it relates to performing the duties of their office," he said in a written statement.

Tally Smith said the people who know her, have worked with her and are aware of her work still support her re-election campaign.

Kentucky's 2018 primary elections will be held on May 22.

Tally Smith said she understands why voters may have a trust issue with her.