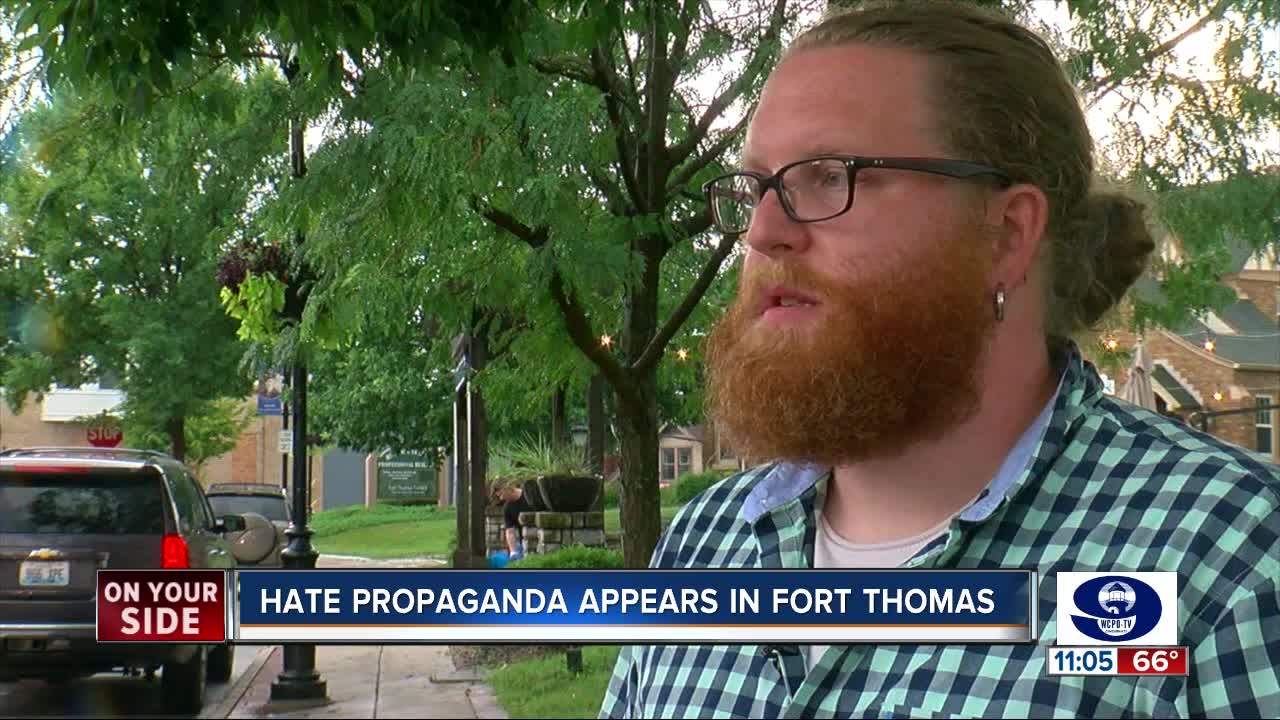 The stickers plaster to lamp posts in the small Kentucky city directed viewers to the website of a white supremacist group that believes people of non-European heritage can never be "true" Americans, even if born in America. One passerby recognized the name from watching coverage of Charlottesville.

FORT THOMAS, Ky. — None of the dozen Patriot Front stickers plastered to lamp posts in Fort Thomas ever uses the word white. They decorate with stars instead of swastikas. A casual passerby might not recognize, even after a visit to the group’s website, what the group really is: A particularly image-conscious gaggle of Neo-Nazis and white supremacists.

He had followed coverage of the group after the deadly “Unite the Right” rally in Charlottesville, Virginia, and the sight of the first sticker in his hometown stopped him in his tracks.

“I took a picture and scraped it down because it’s Neo-Nazi propaganda,” he said Wednesday night. “And then I saw another one.”

He and his friends had been on their way to grab an icy float at AmeriStop, but he spent the next 25 minutes scraping at the stickers with his keys. Driving around the following night, he found 10 more and reported them to police.

“It’s a small town, and I understand that it’s more conservative than not,” he said of Fort Thomas. “But it’s not racist and hate-mongering. We’re a nice, close-knit community, and so it would be nice to not see this stuff around here, you know?”

Patriot Front splintered from another white supremacist group, Vanguard America, in the wake of the Charlottesville rally and the murder of anti-racist activist Heather Heyer. (The killer, James Fields, marched with Vanguard America members during the event.) The disagreement was not about the murder or the white supremacist ideology, according to the Southern Poverty Law Center — it was about the way the murder made white nationalist groups look to the public.

The Southern Poverty Law Center’s entry on Patriot Front includes excerpts from emails and chatrooms in which the group’s founder writes its name was “carefully chosen” because “it can help inspire sympathy among those more inclined to fence-sitting,” using common American imagery as an unthreatening smokescreen to lure in converts.

Despite the focus on a sanitized public face, Patriot Front’s values are still those of white supremacists. The group’s manifesto argues that American identity emerges from a “pan-European” heritage and that people with non-European ancestry can never be Americans; that the government has been overtaken by a sinister cabal of “elites”; and that members should be prepared to fight in order to restore the country to its original values. Other official materials call for the expulsion of all Jewish and Muslim people from the United States, according to the Anti-Defamation League.

Some of the most extreme language was removed from their manifesto in early 2019 but remains preserved on internet archives such as the Wayback Machine:

Olson said he was disappointed and frustrated to see the group’s footprint in his community. So, he added, were people — liberal and conservative alike — who saw his Facebook posts about the stickers.

“It’s unfortunate that people have gotten to a point of hatred on that level,” he said of Patriot Front. “I don’t think this has anything to do with what side of the aisle you’re on. It just has to do with hatred of people for no reason and trying to prey on people that don’t think for themselves.

“I just don’t think it’s a part of what Fort Thomas is and can be, so it doesn’t need to be up in town.”

Bethany Burwinkel, who manages the warehouse at Colonel de Gourmet Herbs and Spices, agreed. She sees Fort Thomas as a mix of all beliefs and types, she said. People treat each other as people.

As for whoever put the stickers up: “I would love to talk to them, like, ‘Really? What were you thinking?’ Empower them with knowledge. ‘This is hateful. This is wrong. Do you really have reasons why you’re doing this?’”