UC Bearcats are looking to prove everyone wrong on the court 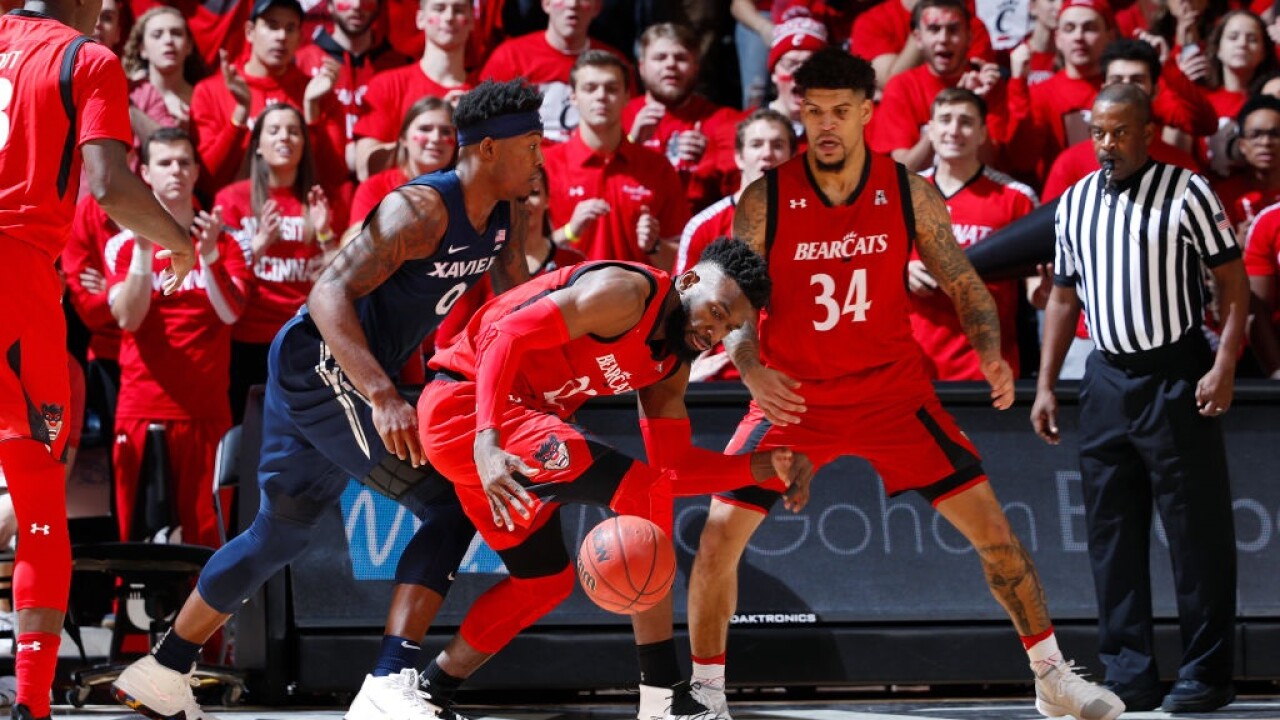 Copyright 2019 Scripps Media, Inc. All rights reserved. This material may not be published, broadcast, rewritten, or redistributed.
Joe Robbins/Getty Images
CINCINNATI, OH - DECEMBER 08: Eliel Nsoseme #22 of the Cincinnati Bearcats fights for the ball against Tyrique Jones #0 of the Xavier Musketeers in the first half of the game at Fifth Third Arena on December 8, 2018 in Cincinnati, Ohio. Cincinnati won 62-47. (Photo by Joe Robbins/Getty Images)

The loss seemingly confirmed expectations that this would be a down year for Cincinnati after losing three starters, including current Houston Rockets power forward Gary Clark and Golden State Warriors guard Jacob Evans.

However, the Bearcats (18-3, 7-1 American Athletic Conference) won their next nine games before falling to No. 18 Mississippi State on Dec. 15 and have had just one other setback. They enter Saturday night’s meeting with SMU (12-8, 4-4 AAC) at Fifth Third Arena on a six-game winning streak.

“I feel like everyone just has a chip on their shoulder to try to prove everyone wrong because the start of the year, after the first loss, they said, 'Aw, this team is going to beat us,'” said Williams, a sophomore guard and first-year starter. “We just tried to prove everyone wrong, and I’m not surprised by anything we’ve done. Now it’s just a matter of staying as a group and playing our hardest.”

Really, it shouldn’t be surprising to anyone what UC is capable of year in and year out.

Mick Cronin seems to have found a winning formula throughout his 13 years as the team’s head coach – though he wouldn’t call it that. He says it’s just a matter of the players rebounding and playing defense, but it also goes back to the type of players he recruits – guys who will stick around long enough to be successful.

“I think if you can't get those (elite) type, certain guys, you better get guys you can win with,” Cronin said when asked about his recruiting. “I take it back to what Coach Huggins (former UC coach Bob Huggins) told me a long time ago when he put me on the road (as an assistant). He said, 'There's two kinds of players: Guys that help you win and guys that don't.’ There are a lot of talented guys in the pros that don't help their team win. Talent is not always the indicator. Just because a guy can shoot, dribble or pass doesn't mean he's a winner. You've got to have pieces to the puzzle.”

Cronin said it’s not that UC doesn’t try to recruit elite players. He recruited former Duke standout and NBA star Luke Kennard out of Franklin, Ohio, just like everyone else, but coaches have to be smart about who they spend their time courting to their programs.

He was surprised to land guard Jarron Cumberland, a top recruit out of Wilmington High School who is now a junior, right after his visit to campus.

“Kemba Walker starting in the All-Star Game, I literally cried when UConn offered him after I recruited him for three years,” Cronin said. “Talk about a heartbreaker. It's not like we don't try. Jarron Cumberland was an elite player. Everybody knew about him. It's not like he was some hidden gem.

“… You've got to know. If you spend all your time recruiting players you're not going to get, then you are left picking from the bottom of the pile, so you have to be smart about it with guys you can get. Obviously we signed (Xenia’s) Samari Curtis, and he's the best player in Ohio, but you have to ascertain how the situation dictates it and then you go from there. Experience tells you who you can get.”

This season is evidence how Cronin’s recruiting has paid off. He can lose big-time players and reload with guys who previously played minimal roles but are ready to shoulder more of a load.

The performance of the defense has been the mark of Cronin’s teams over the years, but the biggest difference this season is how the offense has stepped up without Evans, Clark or Kyle Washington.

The Bearcats average 75.1 points per game and have six players averaging 8.0 points or more, led by Cumberland’s 18.4 points and Williams’ 10.9 points per game. Cumberland and point guard Justin Jenifer (9.1 ppg) were the lone returning starters and are joined by Williams, junior center Nysier Brooks (8.4 ppg) and forward Trevon Scott (9.7) in the lineup. Cane Broome comes off the bench to add 8.0 points.

“Offensively, he (Cronin) just lets us play more,” Williams said. “It's more free on offense. The defense is always going to stay the same, but offensively, we're just playing. There's no more pressure. The leash is off. Last year we had Clark so we had to go inside-out, but now it's just more open and that's helping us now.”

Cronin takes a little pride in his success when he hears opposing fans taunting him – they only hate winners, he said.

Tulsa coach Frank Haith offered another type of compliment after Cincinnati blew out his team 88-64 on Jan. 24 that pretty much sums up why the Bearcats are still so hard to beat.

“Their team is always the same,” Haith said in his postgame comments. “I don't care who they have. Mick's teams play the same way every year. They have different guys and they're the same team, to me. He's done that his whole career, and I give him a lot of credit for that.”

Cronin jokes that Haith made it sound too easy, but agreed to his point.

“We always play hard and we're tough to play against,” Cronin said.