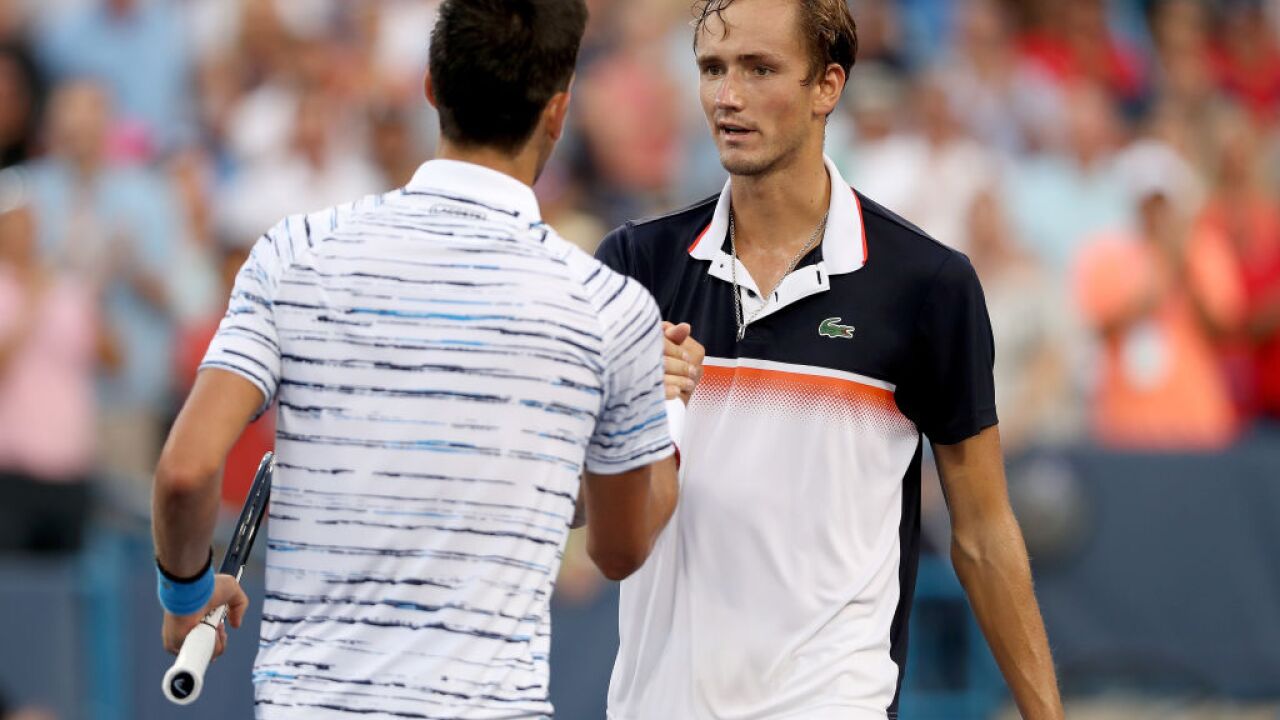 MASON, Ohio (AP) — Ashleigh Barty's chance to move back to No. 1 was only one victory away. At the end of an up-and-down week, she didn't have another comeback left.

Neither did Novak Djokovic, who went away with yet another disappointment in Cincinnati.

Barty lost to Svetlana Kuznetsova 6-2, 6-4 in the semifinals of the Western & Southern Open on Saturday. Djokovic ended the day with another stunner, getting overwhelmed by Daniil Medvedev's serve as the Russian pulled out a 3-6, 6-3, 6-3 victory.

It's been that kind of week in Cincinnati, with top players in both brackets either struggling or hurt heading into the U.S. Open.

The women's bracket has a lot questions with New York just around the corner. No. 1 isn't one of them.

Barty's seven-week run atop the field ended when Naomi Osaka edged ahead of her in the latest ranking. A victory Saturday would have moved Barty back ahead for the U.S. Open. Instead, she dropped the opening set for the third straight match and this time, there was no digging out.

"A week that we battled through," Barty said. "I think at times I played some good stuff. At times, I played some pretty awful stuff."

Which will it be for Barty at the Open? And will Osaka be in good enough shape to defend her title?

Osaka dropped out of her semifinal match Friday with discomfort in her left knee that caused her worry. She still plans to play in New York, but it's unclear whether the knee will be a problem.

And then there's Serena Williams, who retired in the finals at Toronto last Sunday because of back spasms. She also withdrew from Cincinnati before her first match, but stuck around to cheer sister Venus until her loss in the quarterfinals.

A resurgent Kuznetsova gave Barty no openings, knocking off a top-five player for the second time this week to reach her first final of the season. The 153rd-ranked player is recovering from seven-month layoff because of a knee injury.

In her ninth tournament of the season, she got her game together, winning her first Premier-level semifinal since 2017 at Madrid.

"Well, sometimes in life it's like this," Kuznetsova said. "It's like really small things change everything. Definitely it's different momentum I have now."

She'll face Madison Keys , who beat Sofia Kenin 7-5, 6-4 with the help of 14 aces. Keys ended her streak of failing to make it past the second round of her last three tournaments, playing through heat and humidity all week without problem.

"I feel really good" she said. "Every day I'm kind of waking up, hoping that everything still feels like it's in one piece and it feels really good."

In the men's bracket, Djokovic overcame concerns about his right elbow but couldn't prevail over Medvedev's 14 aces. Djokovic got the muscles around his right elbow rubbed during his quarterfinal win on Friday night and showed no sign of a problem a day later.

Djokovic won the tournament for the first time last year, getting the only Masters 1000 title that had eluded him. This one slipped away in the second set.

Medvedev reached the final at Montreal last week and lost to Rafael Nadal. He's back to a title match again after fighting off a break point midway through the second set and closing with a flurry, winning 12 of the last 14 points to even the match and take the momentum.

He'll face David Goffin, who reached his first Masters 1000 final by beating Richard Gasquet 6-3, 6-4 . Goffin also is on an upswing after falling to No. 33 in the ATP rankings on June 10, his lowest since September 2014.

"Of course, it was a tough period there," Goffin said. "I was coming back from injuries. I had some trouble with my confidence. I couldn't find my rhythm, my game. So it's great now. I'm feeling great. I'm back at my best tennis."

And Federer, the seven-time champion, failed to reach the weekend, losing in the quarterfinals.