Sports Vault: The 'Helicopter' made his mark on UC hoops 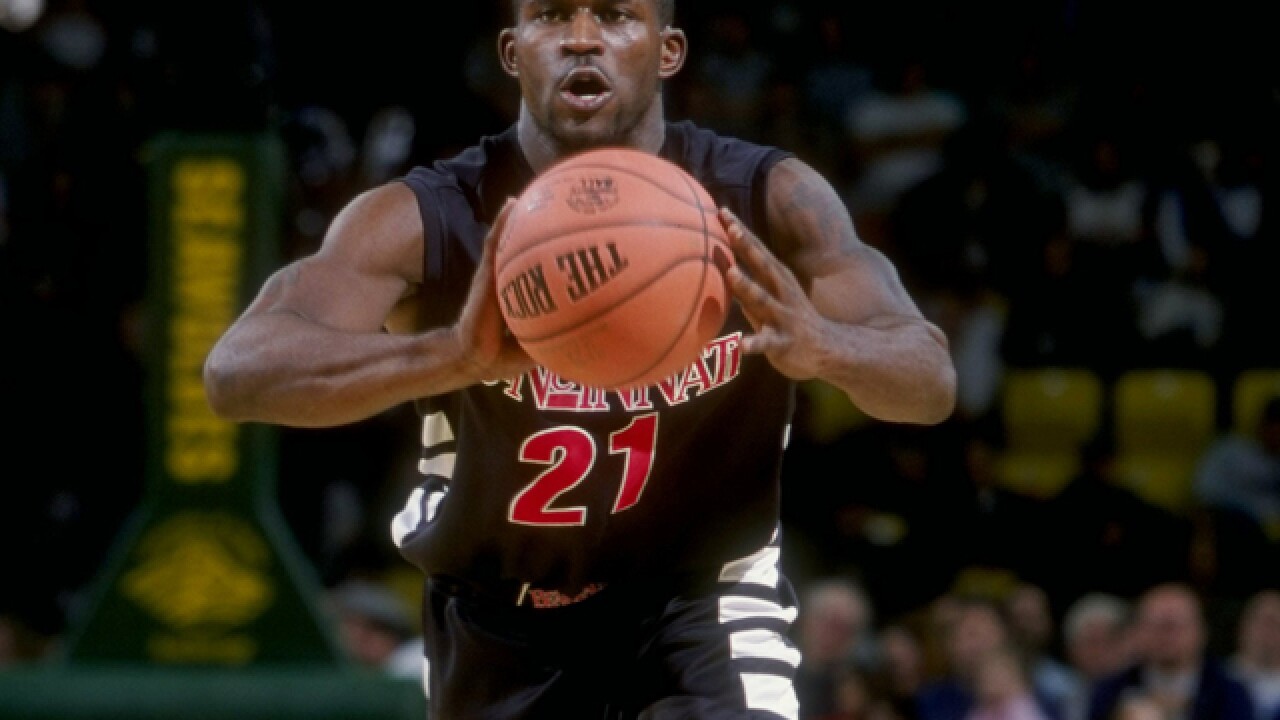 CINCINNATI – Melvin Levett hasn't played a college basketball game since 1999, but fans often greet him as if he competed last night.

They call him The Helicopter, or Levettate, the Grim Leaper and Marvelous Melvin.

His nicknames are homages to his University of Cincinnati career, where he finished 25th all-time in scoring with 1,119 points and dazzled crowds with his trademark post-dunk leg twirl while hanging on the rim.

Although Levett is originally from Cleveland, the 41-year-old UC Hall of Famer wouldn't dream of leaving this adopted hometown.

"Cincinnati has been great to Melvin Levett," Levett said. "I can't say enough about how people treat me here in this area, whether it's passing through the mall, driving down a road or running into me at a gym. It's always been the utmost respect."

Levett spends his days now as an English as a Second Language tutor at Winton Woods Elementary. He's a middle school basketball coach and a high school tennis coach, a hoops legend and a Bearcats fan favorite.

Levett's mystique started when he was in eighth grade -- at least that's when The Helicopter nickname originated. Levett said Tom Erzin, his AAU coach, bestowed the honors during a summer game when Levett delivered a wicked windmill dunk that stunned other players, and Erzin most of all.

"He yelled and screamed from the sideline. It was kind of funny. I look back on it like -- wow, that was pretty cool that he did that. But he was like a teammate of some sort. Here was this grown man, screaming from the sideline: 'Oh my gosh! Your name is not Melvin anymore!' Keep in mind that I'm running down the court to play defense. And he was like, 'Your name is The Helicopter!' The whole team just started going crazy. And it just stuck from there."

The moniker eventually emerged at UC, where Levett became a key cog for coach Bob Huggins. Levett started slowly, playing behind other Bearcats as a freshman and averaging 2.4 points. He chipped in 4.2 points per game as a sophomore.

His junior season in 1997-98 was a different story altogether.

Seasoned by patience, Levett was more than ready to give fans a show. The shooting guard did just that against Alcorn State in the fourth game of the season, issuing a ferocious putback jam iced by the rotating leg swing.

He averaged 14.1 points in a 27-6 campaign that featured Conference USA regular-season and tournament championships and a trip to the NCAA tournament's second round. UC was ranked as high as ninth in the Associated Press Top 25.

His final season, in 1998-99, Levett and co-captain Kenyon Martin guided the Bearcats to another 27-6 record, conference tourney title and NCAA tourney second-round finish. UC ascended to No. 3 in the rankings that December, largely due to a monumental upset of No. 1 Duke.

Levett authored one of the top plays in UC history against the Blue Devils. His last-second dunk via a pass from Martin ensured a 77-75 victory. Levett scored 25 points in the thriller.

With a highlight-reel resume, dual Associated Press All-America honorable-mention nods and high-powered offensive stats, including 34.8 3-point shooting percentage, Levett was primed for the 1999 NBA draft. He was taken by the Detroit Pistons in the second round, 54th overall.

The Pistons traded Levett to Los Angeles Lakers soon after.

"I had maybe 2 months in the Pistons' system to kind of learn what the program was about, which was a total business. It doesn't come down to skill a lot of times. It comes down to a good business decision for the organization. That's a lesson to be learned," Levett said.

Levett was waived by the Lakers before the season started and watched the franchise's championship season from home. He said he couldn't be mad, though, because he lost his job to eventual five-time NBA champion and Miami University standout Ron Harper -- a player he watched with the Cleveland Cavaliers and emulated in his back yard.

Levett's professional career never took root in the NBA. Instead, he played for teams like the Cincinnati Stuff, the Harlem Globetrotters, the Saskatchewan Hawks, the Florida Sea Dragons and the Kentucky Pro Cats.

"I thought I was going to be one of those guys who had a draft opportunity, be drafted by a team and be signed immediately," Levett said. "I didn't know my journey would take me to the International Basketball Association in Canada, or the (United States Basketball League) in Fort Myers, Fla."

Levett's playing career ended with the Kentucky Pro Cats. He shattered his left ankle coming down from a dunk and underwent surgery.

At the time, Levett's son, Devyn, was 5 years old. Levett decided to refocus his priorities and figure out a different future for his son and himself. He returned to UC, finished his degree, and coached basketball at varying levels throughout the region: Middletown and Colerain, and Miami University Hamilton and Withrow.

Levett is no stranger to UC, a place that helped him become "who I am," and he loves hearing fan perspectives of those Bearcats glory days.

He cherishes those memories.

"You kind of have tunnel vision when you're playing. You don't really have enough time to enjoy the fruits of what you're doing," Levett said. "Now, as an older man and hearing all the great things people are saying -- 'Hey Melvin, watching you, you made me feel like this on this night…' You can't pay for stuff like this. And it's almost 20 years after you did it."