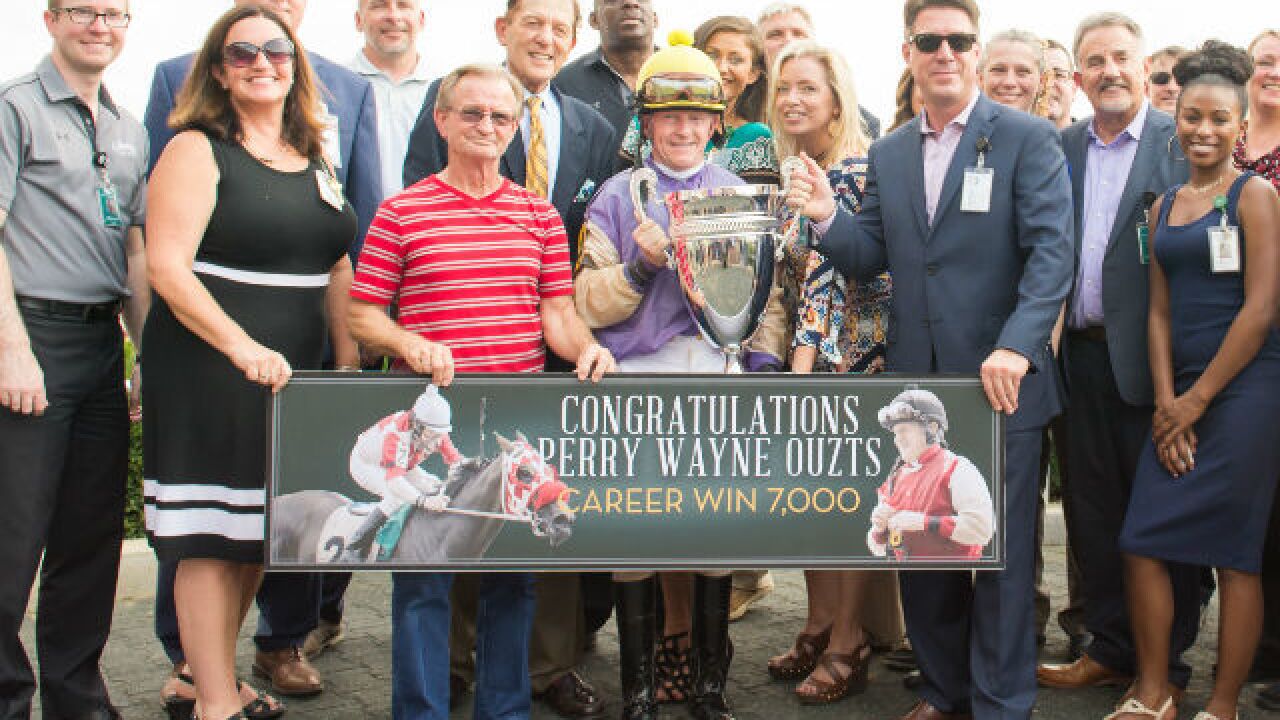 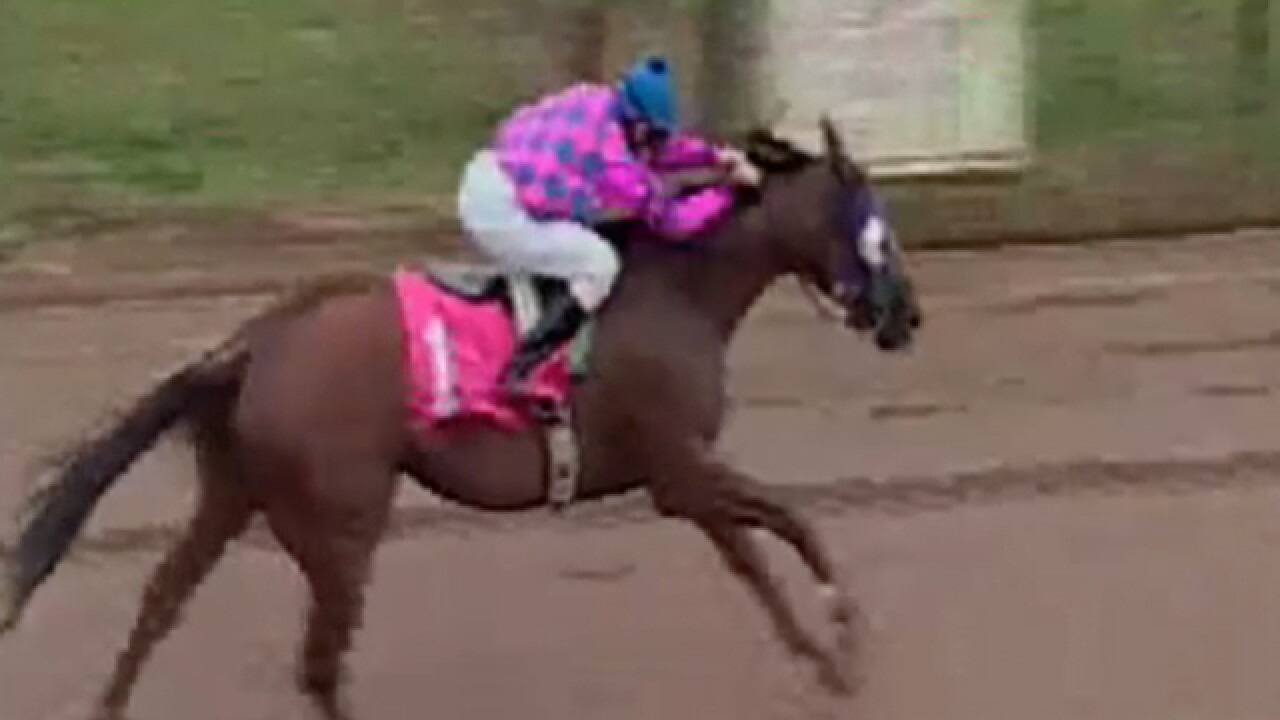 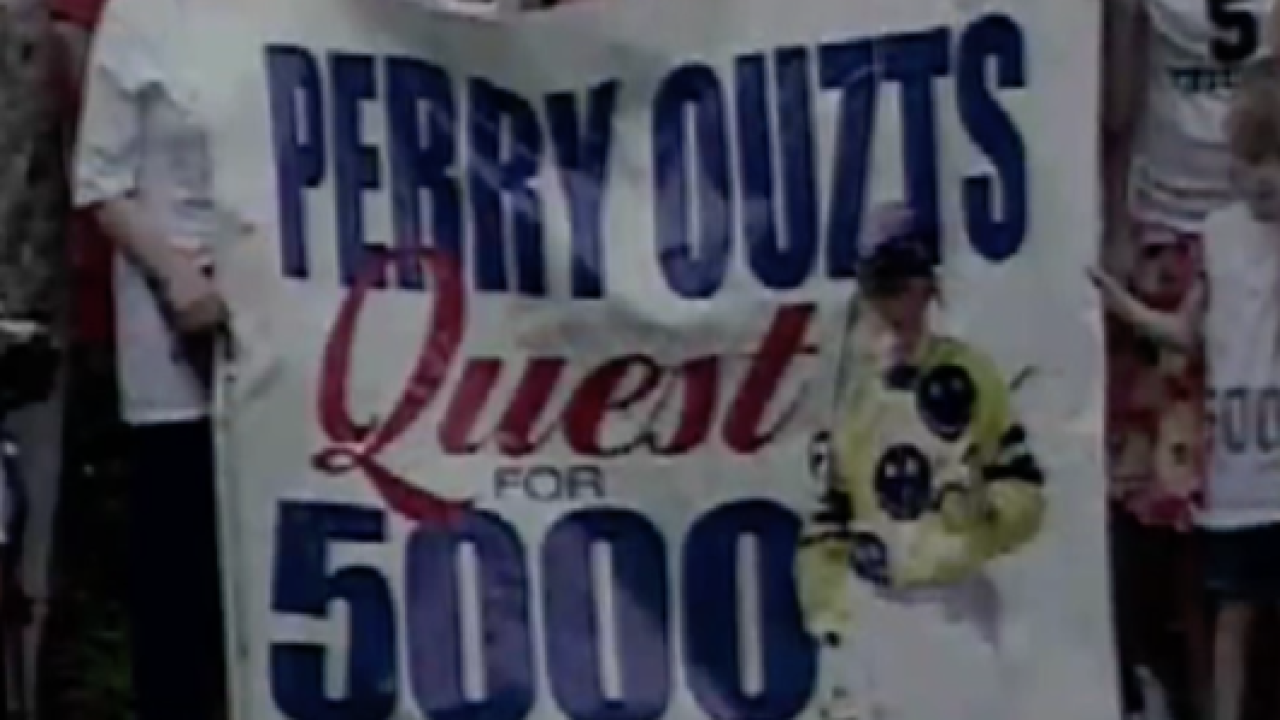 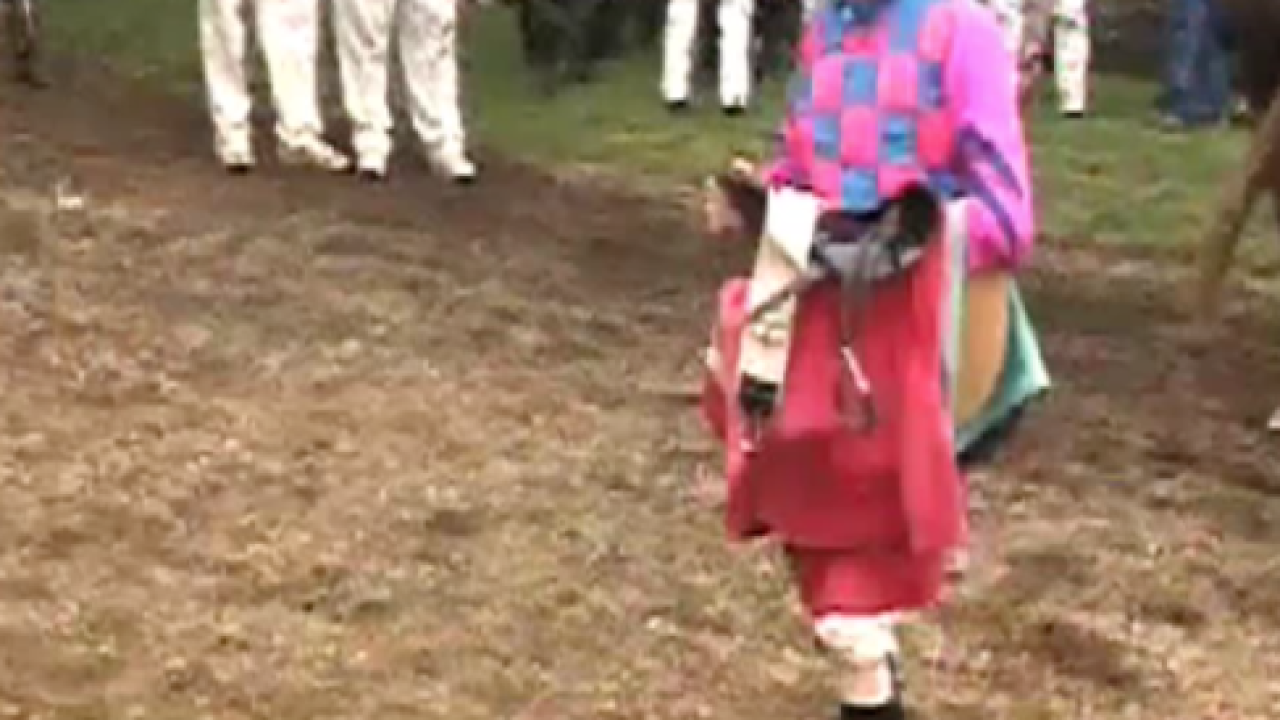 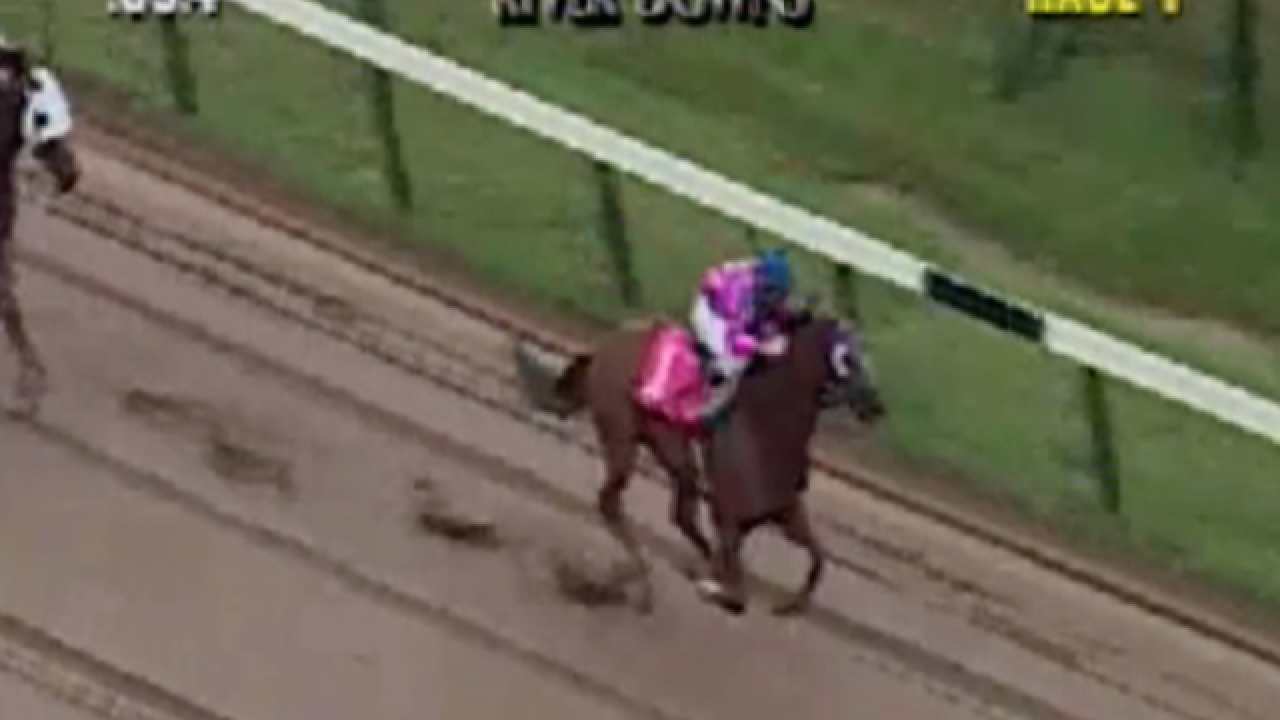 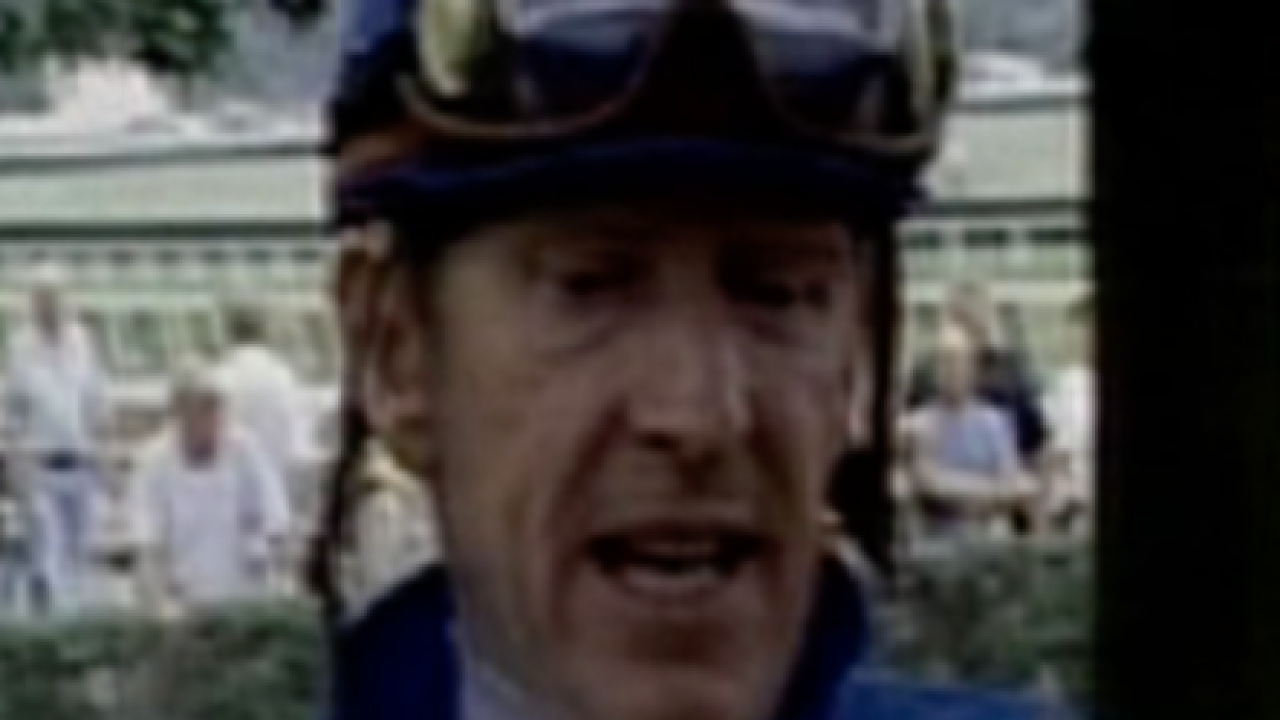 This story about the amazing career of jockey Perry Ouzts was originally published on WCPO.com on Aug. 1, 2017. It was updated Friday after Ouzts rode his 7,000th winner.

CINCINNATI - In 2006, jockey Perry Ouzts overcame a horrific accident and an 11-month absence from horse racing before making a magnificent comeback capped by his 7,000th career victory on Friday at Belterra Park.

The 64-year-old is one of only nine jockeys in American horse racing history to reach 7,000. Ouzts rode Emmy’s Candy in Belterra Park’s third race of the day to his historic win.

Some expected Ouzts to ride off into retirement after joining an elite club of 22 American jockeys that conquered the 5,000-win milestone.

The Hebron resident still races at Belterra Park in the summer and Turfway Park in Northern Kentucky in the winter, often seven or eight times a day.

“To make the Top 10, I thought was pretty awesome,” Ouzts said last year.

WATCH Ouzts talk about why he stayed in the Tri-State after getting his 5,000th win in 2007:

Ouzts’ career has spanned 44 years and featured winnings of more than $45 million. Most of his wins have come here -  at River Downs (since replaced by Belterra) and Turfway. He started riding professionally at Beulah Park outside Columbus in 1974 and, unlike many peers who gave up the sport due to weight gain, injury, disinterest or the difficult nature of the profession, Ouzts’ determination never wavered.

Scoot 'N Boot -- Ouzts' nickname, a nod to his ability to propel horses out of the gate -- has made more than 50,000 career starts. That's second only to Russell Baze.

Besides loving racing itself, Ouzts has a strong connection with horse parks. He shares that affinity with his wife of nearly 34 years, Toni. She was a groomer when they met at River Downs in 1984, and she remains a groomer now. The couple have two children: Kyle, 28, and Tyler, 25.

Perry Ouzts discouraged his kids from following in his footsteps career-wise, but it became a moot point when they grew to 6 feet. Ouzts once said that blocking out fear was part of being a jockey, because otherwise it became a gripping, oppressive worry about potential injury, paralysis or death.

Ouzts had two major racing injuries that came 14 years apart. He was thrown off a horse at River Downs in 1992 and spent half of his 10-day hospital stay in intensive care. His jaw was wired shut, necessitating a tracheotomy, and he had a broken nose and shoulder.

His most recent accident nearly cost his life.

Ouzts was atop Finders Chance at Turfway when the horse's front legs buckled near the quarter-pole in January of 2006. Ouzts was thrown from the horse as it hit the ground. Four of Ouzts' vertebrae were cracked and a fifth was crushed.

Ouzts' arm was broken by another horse that clipped him, and Finders Chance trampled his leg when it scrambled to its feet. The jockey ultimately needed three surgeries and nine months of rehab.

"Most guys would have said, 'Hey, I'm going to call it a day.' Not Perry, because he has that passion. He just wants to continue what he's doing as long as he can," said John Engelhardt, executive director of the Ohio Thoroughbred Breeders and Owners and a former 30-year promoter of racing in Cincinnati.

Ouzts returned to work Dec. 26, 2006. Riding Divine Dancer, he placed second on the same track on which he'd sustained his injuries.

He nabbed his 5,000th win on Kandinsky at River Downs on Aug. 21, 2007. As the years progressed, his collection of victories grew to 6,000 and beyond and distanced a doctor's prognostication.

"The doctor told me that I wouldn't ride again. I've been riding for over 10 years and won a bunch of races, so I was right and he was wrong," Ouzts said.

Ouzts, the subject of the Eclipse Award-winning documentary "Ironman Perry Ouzts," has recorded more wins than a host of jockeys already in the National Museum of Racing and Hall of Fame, including Jorge Velasquez, Earlie Fires (Ouzts' cousin) and Sandy Hawley.

Traditionally, jockeys who have competed in major races have been favored for nominations.

"I don't think I can get in because I never win races at big race tracks. That's what they pretty much base it on. They don't care how many races you win or how hard you worked," Ouzts said.

Ouzts has plenty of support at the grassroots level, where fans have sought to get the jockey into the Hall of Fame. A petition was started to support his consideration. He hasn't received a nomination, but Engelhardt said it may be possible.

Ouzts, Engelhardt said, could have been an elite rider anywhere he wanted but he chose destinations and routines he liked. Ouzts is always close to Toni. He's also just a short motorcycle ride away from their home.

Ouzts has no plans to slow down or streamline his regimen. He simply loves his life's work.

Asked what it meant to have so many accomplishments in four decades, Ouzts summed it up in two words: "Just thankful."