FC Cincinnati started strong but failed to clinch against NYCFC 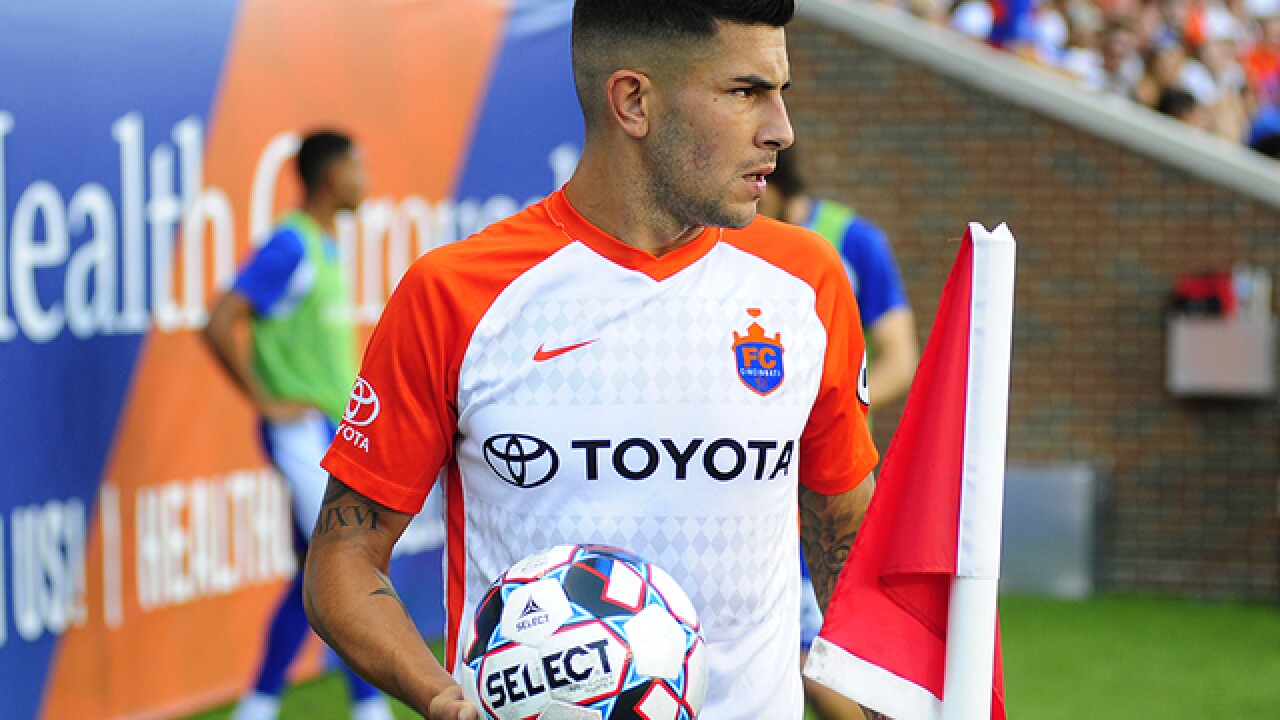 Copyright 2018 Scripps Media, Inc. All rights reserved. This material may not be published, broadcast, rewritten, or redistributed.
JOSEPH FUQUA II
FC Cincinnati midfielder Emmanuel Ledesma (45) looked on before a kick against Penn FC in the second half at Nippert stadium Sunday August 12, 2018. FC Cincinnati won 1 to 0 against Penn FC. Photo by Joseph Fuqua II for WCPO

The Orange and Blue lost 4-1 to NYCFC on Saturday in front of 27,273 fans at Nippert Stadium, giving Ron Jans a disappointing result in his first home game as FC Cincinnati’s new head coach.

FCC was coming off a much more positive showing last weekend at Columbus and looks to get back on track when the Crew visit Nippert for the second leg of the Hell is Real derby Aug. 25.

1. Up and down first half

FC Cincinnati rode the waves of a somewhat dramatic first half only to fall victim to allowing yet another late goal going into halftime – the sixth one scored in the 40th minute or beyond in the last nine matches.

The Orange and Blue very well could have taken a lead into halftime or at least still been tied, but Heber scored on a counter attack after Emmanuel Ledesma’s turnover in added time to give the visitors the 2-1 advantage.

Missed opportunities and letdowns kept FCC from the lead. After Roland Lamah was cut down in the box on a breakaway, Ledesma attempted a stutter-step, skip-hop on the run up to the penalty kick in the 23rd minute and NYC goalie Sean Johnson read it perfectly to make the save.

All was forgotten seven minutes later when new left back Andrew Gutman curled a hard cross around traffic in the box and Allan Cruz hammered home the one-touch finish for a 1-0 lead. As smoke was still clearing from the celebration in The Bailey at the other end of the stadium, New York City responded with the equalizer from Valentin Castellanos.

FCC goalie Przemyslaw Tyton came up with a big save on a penalty kick awarded to NYCFC when Gutman was called for a handball in the box in the 36th minute, and that should have been the prevailing highlight going into halftime. Instead, Heber stole the spotlight with the late goal.

“It's unfortunate we missed the PK,” defensive midfielder Caleb Stanko said. “That would have sealed the deal in my opinion. Missing that PK and then coming back and them scoring two minutes later, that took so much wind out of our sails.”

The Orange and Blue didn’t show much of a response in the second half, and New York just widened the gap as FCC fell flat. The flow of the game was night and day between the first and second halves.

Mathieu Deplagne had a chance to equalize in the 65th minute when a free kick found his foot at the back post but he booted it wide. FCC made three offensive subs after that to try to keep the wingers fresh in a system that requires much from that position; however, there weren’t many opportunities like Deplagne’s.

Castellanos added a second goal in the 71st minute when he was left open at the back post to finish off a corner kick on a second-chance header, and even with almost 20 minutes left, it felt like the dagger. Heber then made sure it was over in the 89th minute, scoring his second goal of the night.

Waston said “it’s just the little details” that need ironed out to avoid conceding goals. Players also struggled knowing exactly where to position themselves as they pressed New York because they weren’t sure during their preparations if the visitors would play with three central defenders or a four-man back line.

“The movement he wants from the midfield and the attackers and the way we attack, we have to be a little more clear where we play with a back four or a back five,” Waston said. “Getting in sync and having everyone in the same mindset to make adjustments, that's something we have to improve on.”

Even on a night when FCC lost by three goals, Jans could see plenty of positives. He spoke so much of those in his post-game press conference it almost sounded like he was describing a different match.

When asked if he was still disappointed in the result, Jans admitted he probably would sound much different about it in the morning, but for now, he is encouraged by the character of a group that still wants to win.

“What I see is a group that is better than the 18 points we have now,” Jans said. “I am sure we are going to get results, and that's why I am positive, because I like NBA, and some (NBA) teams know they won't reach the playoffs and they lose game after game after game, and they accept to start losing. We won't. I won't. Will is not part of the team, but the desire from the players is there and they have to keep doing that.”

The way FCC keeps giving up goals right before the half and having letdowns after scoring seems to indicate there could be a mental barrier the players can’t get over; however, Jans said he doesn’t see that being an issue.

“I'm not sure because individual mistakes were made by different players so you cannot say the team has all the same mental problems,” Jans said. “It's every player who has his own personality.”