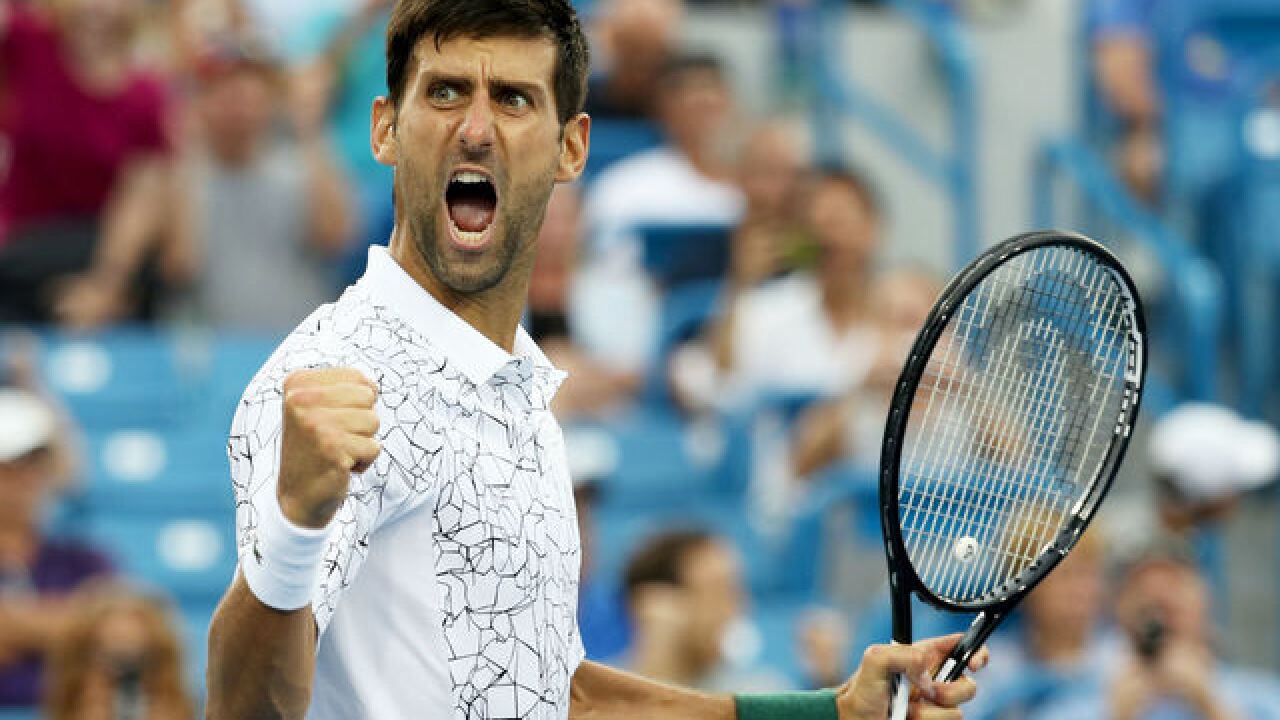 Image copyright 2018 Getty Images. All rights reserved. This material may not be published, broadcast, rewritten, or redistributed.
<p>MASON, OH - AUGUST 17: Novak Djokovic of Serbia celebrates after defeating Milos Roanic of Canada during Day 7 of the Western and Southern Open at the Lindner Family Tennis Center on August 17, 2018 in Mason, Ohio. (Photo by Rob Carr/Getty Images)</p>

MASON, Ohio (AP) — Novak Djokovic destroyed a racket to get on track, and took another step toward the title that has eluded him. Roger Federer stayed on course to add to his record haul in Cincinnati.

Enraged by his poor play at the outset, Djokovic slammed his racket on the court and rallied for a 7-5, 4-6, 6-3 victory over Milos Raonic on Friday night to reach the semifinals of the Western & Southern Open, the only ATP Masters event he has never won.

Federer has won it seven times, more than anyone else. After missing the tournament the last two years with injuries, he fought off countryman Stan Wawrinka 6-7 (2), 7-6 (6), 6-2 in a match that almost lasted to midnight.

Several days of rain turned the quarterfinals into an endurance test. Six men's and three women's singles matches were held over from Thursday because of rain.

Federer needed only 72 minutes to beat Leonardo Mayer in his opening match. Then, it was off for a little rest before play Wawrinka, the second match of the day for both players.

The opening game of the third set was delayed 22 minutes because of lightning. Federer was at his best when play resumed, breaking Wawrinka to go up 4-2 — the first service break of the match — and then again to finish it off after 2 hours, 16 minutes.

Federer felt tired when he sat during the lightning delay, unsure whether the match would resume. He got into a flow after the players warmed up again.

Djokovic led the crowd in cheers and pumped his fist after ending his long day. He beat defending champion Grigor Dimitrov at the start, completing a match suspended overnight because of rain and returned a few hours later to play a rested opponent.

"Quite a roller coaster, to be honest," he said.

Djokovic has reached the finals in Cincinnati five times and lost every time. He's trying to become the first to win all nine ATP Masters 1000 championships.

"That's why I'm here," he said. "I have plenty of motivation. I've put myself in a good position in the semifinals."

His determination showed in the first set. After losing his serve, Djokovic bashed his racket on the court three times, sending pieces of the frame flying. He got a different racket and started playing better.

"I'm not proud when I break the racket, especially I know there are kids around and watching and I'm not proud of it," he said. "But sometimes it's just — it's too strong and you let it out."

He'll face Marin Cilic, who also won twice Friday to reach the semifinals. He beat Karen Khachanov in three sets, completing a suspended match, and got a 7-6 (7), 6-4 win over Pablo Carreno Busta, who was playing his only match of the day.

In the women's bracket, the top-ranked Simona Halep beat Ashleigh Barty 7-5, 6-4 early in the afternoon to reach the quarterfinals, then returned a few hours later and knocked off Lesia Tsurenko 6-4, 6-1, raising both arms in triumph at the end of her long day featuring two full matches.

Halep has faced the most challenges from the rain, with one match suspended overnight Wednesday and then her third-round match held over for a day as well.

"I hope it's not going to happen again," Halep said. "I will not complain, but it was a tough day."

Halep is seeking her first Cincinnati championship after losing in the finals last year and 2015. She'll play Aryna Sabalenka, who beat Madison Keys in straight sets.