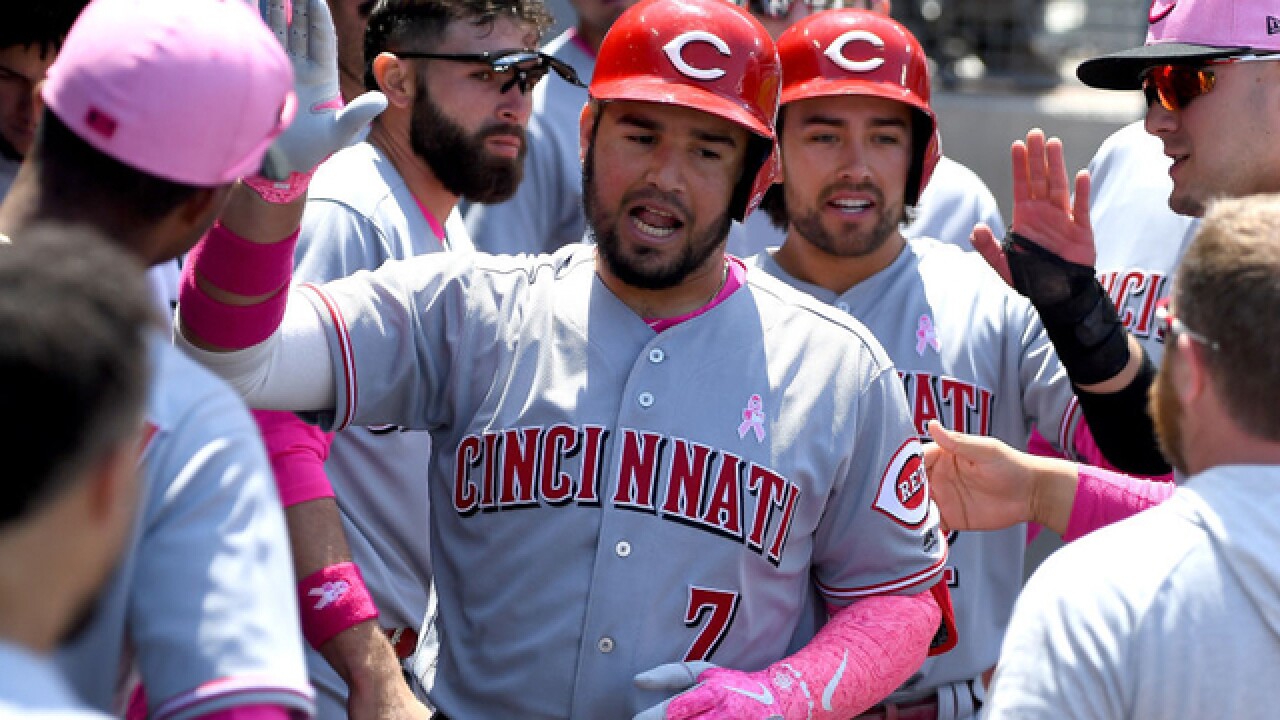 Copyright 2018 Scripps Media, Inc. All rights reserved. This material may not be published, broadcast, rewritten, or redistributed.
Jayne Kamin-Oncea
<p>Eugenio Suarez #7 of the Cincinnati Reds is greeted in the dugout after a two-run home run in the third inning of the game against the Los Angeles Dodgers at Dodger Stadium on May 13, 2018, in Los Angeles, California. (Photo by Jayne Kamin-Oncea/Getty Images)</p>

Good morning! It's May 14, and it's the birthday of Reds great Tony Perez. "Big Doggie" is 76 today.

On a personal note: I've begun reading John Erardi's new book on Perez, and it's terrific. We knew a lot about him as a Red, but we were clueless about what happened before he hit the big leagues.

Here’s some things worth knowing as you start your work week.

1. The Reds have been transformed into a winner -- for the time being.

With Sunday's 5-3 win over the Los Angeles Dodgers, the Reds have won six straight games. It was the first time a Reds team has swept the Dodgers in a four-game series since August 1976. None of the current Reds were alive at that time. Many of their current fans weren't alive at that time, either.

2. So why have the Reds had this sudden bout of success?

I'm not going to get into a bunch of statistics, but it's obvious that the starting pitchers aren't giving away the game in the early innings. There was a stretch of games in which the Reds found themselves down three or four runs in the first and second innings but not during this winning streak.

I fell out of my chair when Alex Blandino laid down a perfect suicide squeeze bunt in Sunday's game. That's real baseball, not just blasting balls over the fence. And when Amir Garrett posted a couple of strikeouts to end the eighth inning, he kicked up his left foot and punched the air. A little swagger never hurts.

4. The Reds will try to keep it going tonight in San Francisco.

Sal Romano pitched well the last time out. It will be another late night on the coast with a 10:15 p.m. start.

5. Baseball big shots from Sunday: Giancarlo Stanton went 4-for-4 in the Yankees’ win.

The Yanks and Red Sox are both setting a torrid pace in the AL East with records of 28-12. Cory Kluber of the Indians became the first six-game winner in the majors when he led the Tribe to a win over Kansas City. Still Atlanta is the biggest surprise I see. The Braves won again Sunday, and Sean Newcomb improved to 4-1. He has thrown 20 straight scoreless innings. I've never heard of the guy before.

6. In the NBA, the Celtics pushed around the Cavaliers in Game 1 of the Eastern Conference Championship series 108-83.

Boston scored 17 straight points at one stretch. LeBron James said, "I have zero level of concern at this stage." I recall that Indiana also ripped Cleveland in Game 1 of that series, too. Game 2 is Tuesday night. Frankly, I'm most anxious to watch the Warriors play at the Rockets at 9 p.m. Monday in the Western Conference finals. I think Houston is the only team that stands a chance against Golden State.

The Capitals lead the series 2-0, and both wins were in Tampa. They move to Washington for Game 3 on Tuesday.

8. I had the great honor of emceeing the Hamilton County Sports Hall of Fame induction on Saturday.

Softball sensation Jan Deters and Bowling great Willie Dean were inducted. This is the 56th year for the HCSHOF, making it the second-oldest hall of fame in our area, second only to the Reds HOF.

I took my wife to breakfast and then grilled out at night. She got a call from our son, so the day was complete. My mother has been gone for 18 years, but I miss her every day. I wish I could call her, but I still hear her every day in the things I say and the things I do.

Hope your Monday is a great one. Give me a follow on Twitter (@popo_wcposports.) And feel free to send me a note or suggestion at jpopovich@wcpo.com.