Popo in 9: Reds' winning streak was fun while it lasted 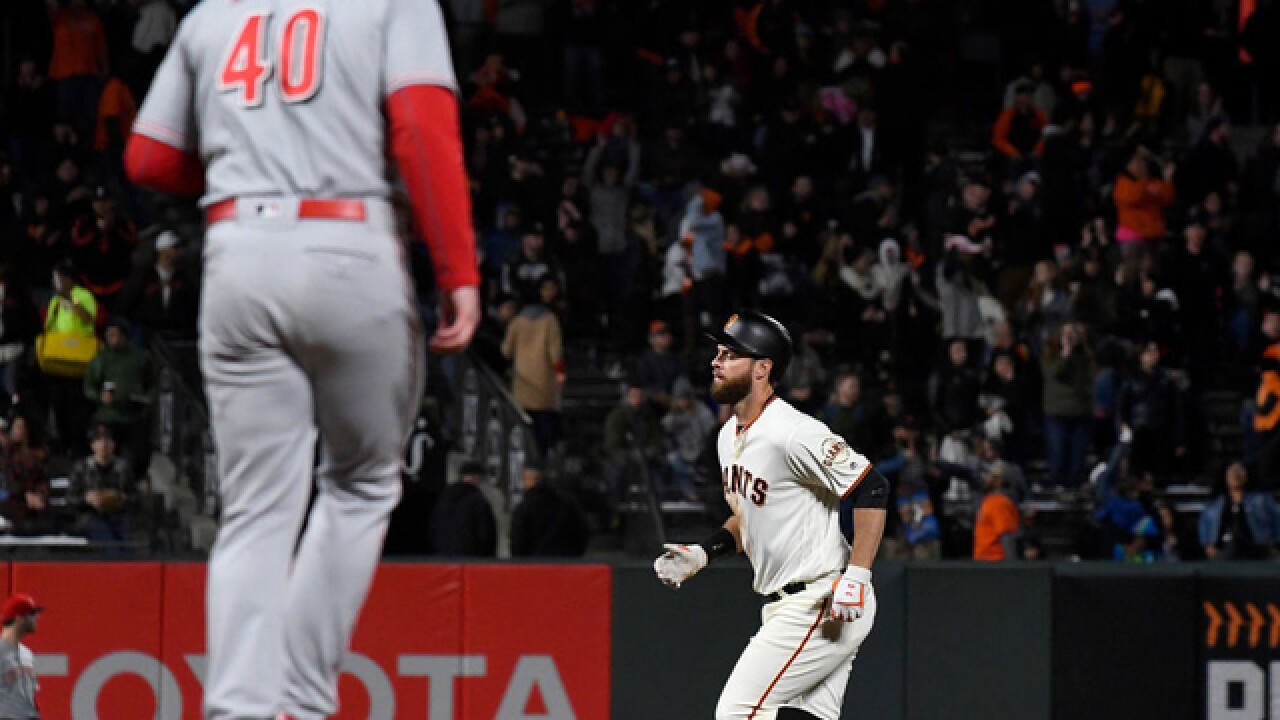 Copyright 2018 Scripps Media, Inc. All rights reserved. This material may not be published, broadcast, rewritten, or redistributed.
Thearon W. Henderson
<p>Brandon Belt #9 of the San Francisco Giants trots around the bases after hitting a solo home run off of Austin Brice #40 of the Cincinnati Reds in the bottom of the eighth inning at AT&T Park on May 14, 2018, in San Francisco, California. The Giants won the game 10-7. (Photo by Thearon W. Henderson/Getty Images)</p>

CINCINNATI -- Good morning! It’s Tuesday, May 15, and on this date in 1948, Cincinnati’s Eddie Arcaro rode Citation to victory in the Preakness Stakes. Citation would go on to win the Triple Crown.

The great George Brett is 65 years old today. The Pine Tar controversy always comes up when you mention Brett, but he was one of the truly dangerous hitters of the ’70s and ’80s -- a lifetime .305 hitter with more than 300 home runs.

Here’s some stuff you should know about before you go out the door today:

1. I could hear Tony Bennett singing it now, “I left my streak in San Francisco.” The Reds' six-game winning streak came to a sudden, painful halt at AT&T Park. Sal Romano got hit in the first, second and third innings, and then Jim Riggleman came and got him. The Giants won it 10-7. Joey Votto left midway through the game with lower back tightness.

2. The Reds will throw Tyler Mahle at the Giants on Tuesday night. But this might change: Mahle was shown sitting by himself in the Reds dugout Monday night. Jim Day of Fox Sports Ohio said he was sick, so I’m not sure why he was sitting in the dugout.

3. Ben Zobrist of the Chicago Cubs is trying to go “old school,” but Major League Baseball won’t let him. Zobrist has worn black cleats at Wrigley Field during day games for the past two years to honor the game’s past. He said he watched film of Stan Musial and Ernie Banks playing in the ’50s and ’60s. But there’s a problem with his gesture. Black shoes do not comply with today’s uniform look. The Cubs are supposed to wear shoes that are at least 51 percent blue. He was told that he was in violation of the rules and might be fined. So what did he do? He showed up Monday wearing the black shoes again, and teammates Kyle Schwarber and Steve Cishek wore black as well. I can’t believe MLB will press the issue.

4. It brings up a story from Reds spring training in Tampa years ago, probably in the early ’80s. One of the clubhouse attendants would sit outside and completely paint each player’s shoes with black shoe polish. Other clubs were wearing colorful shoes, but the Reds insisted that their players wear only old-fashioned black. So the attendant would make sure that their shoes were entirely black, including the logos on the side of the shoes. This didn’t make the players happy because they couldn’t get endorsement deals if the logos weren’t evident. Reds players were ecstatic when they made the All-Star Game because they could wear Red cleats with the logo displayed. I’m guessing the Reds quit polishing their shoes sometime in the mid-to-late ’80s.

5. In the NBA playoffs, the Golden State Warriors were just too good for the Houston Rockets in Game 1 of the Western Conference finals. It was a battle through the first half, tied 56-all at halftime. Kevin Durant and Klay Thompson were the 1-2 punch for Golden State. Durant had 37 points, and Thompson had 28. Game 2 is Wednesday night, again in Houston.

6. The Cleveland Cavaliers and Boston Celtics resume the Eastern Conference finals on Tuesday night. The Celtics won the series opener on Sunday by 25 points.

7. The Vegas Golden Knights aren’t playing like an expansion team. They beat Winnipeg 3-1 Monday night to even up the NHL’s Western Conference finals 1-1. Monday’s game was in Winnipeg; they move to Las Vegas for Game 3.

8. It’s Tampa Bay at Washington in the Eastern Conference finals Tuesday night. Washington has a 2-0 lead in the series.

9. Sometime in the years ahead, we’ll all be able to place a legal bet on a Cincinnati Bengals game or a Reds game without having to go to Las Vegas. The Supreme Court on Monday struck down a law that has barred states from allowing sports gambling. It will be up to each individual state; some will pursue it, and others will ignore it. An AP story Monday said most observers expect that Ohio and Indiana will implement legalized sports gambling within two years. They think Kentucky will do it within five years.

I bet it will be another hot day on Tuesday. Hope it’s a good one. Give me a follow on Twitter (@popo_wcposports.) And feel free to send me a note or suggestion at jpopovich@wcpo.com.