Popo in 9: Bet on Scooter Gennett when the bases are loaded 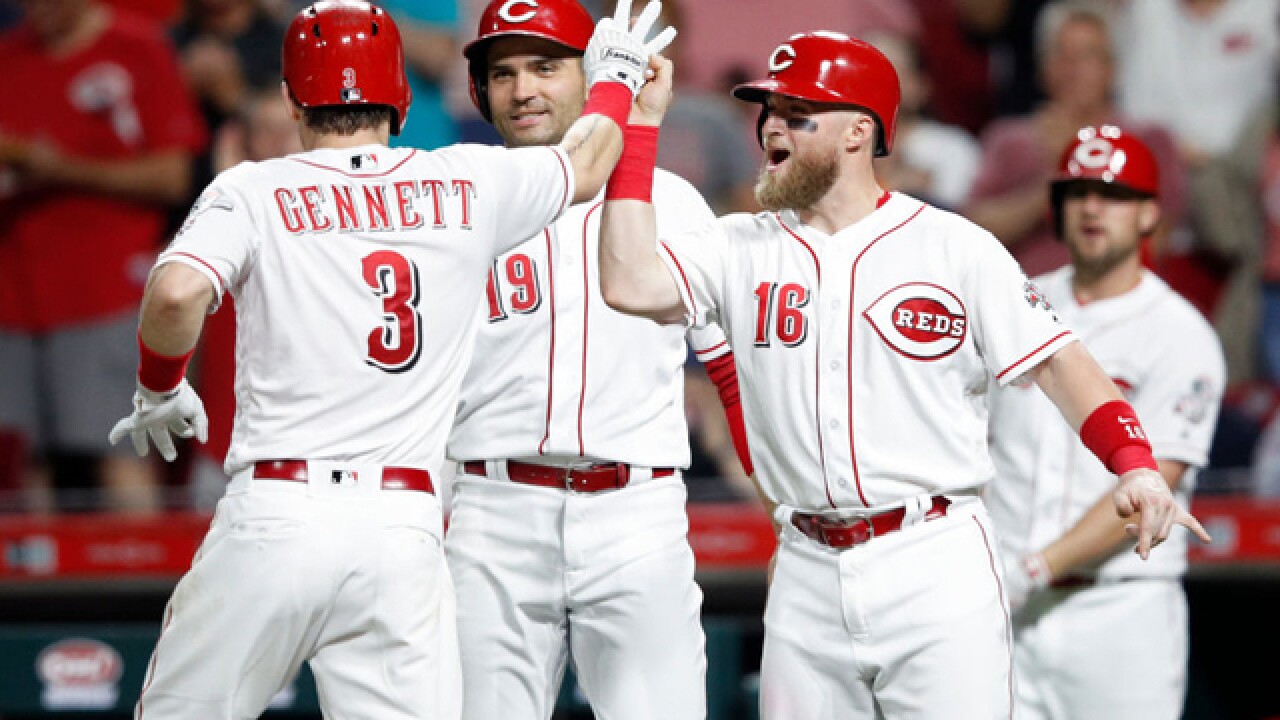 Copyright 2018 Scripps Media, Inc. All rights reserved. This material may not be published, broadcast, rewritten, or redistributed.
Joe Robbins
<p>Scooter Gennett #3 of the Cincinnati Reds celebrates with Tucker Barnhart #16 and Joey Votto #19 after hitting a grand slam in the fifth inning against the Pittsburgh Pirates at Great American Ball Park on May 22, 2018 in Cincinnati, Ohio. The Reds won 7-2. (Photo by Joe Robbins/Getty Images)</p>

CINCINNATI -- Good morning, everyone. It’s Wednesday, May 23 -- let’s get over the hump.

On this date in sports history in 1935, the Reds planned to play the first night game in major league history at Crosley Field.  But the game got rained out. (It figures.) They played the game a night later.

Here are a few things you should know as you head to work or play today.

1. Scooter Gennett hit a grand slam home run and drove in six runs as the Cincinnati Reds beat the Pittsburgh Pirates 7-2. Gennett is money with the bases loaded. He had four grand slams last season and has another one this season. He also had an RBI double in the first inning.

2. The Pirates intentionally walked Joey Votto, loading the bases, to get to Gennett.

“It definitely makes sense what they did,” Gennett said. “I think Joey’s the best hitter in baseball. I definitely didn’t take it personally. But I do like getting up there with the bases loaded.”

3. Matt Harvey was shaky at the start, but he buckled down and pitched well for the Reds. The Pirates loaded the bases in the first inning, helped by a pair of walks. But Harvey got out of trouble when he struck out Colin Moran to end the inning. Harvey was credited with the win.

4. ”It was a good step for me,” Harvey told reporters after the game. “There were times earlier this year when I thought I might not get another win in the big leagues. It was good to get that first one.”

5. The game started 65 minutes late because of a downpour that roared through Downtown. Meteorologist Steve Raleigh told me that the Downtown area got about 1 ½ inches of rain during a 45-minute period. It took a lot of work from the grounds crew to get the field playable.

6. Homer Bailey (1-6) pitches against Chad Kuhl (4-2) at 7:10 tonight. The Reds are also expected to activate reliever Michael Lorenzen before the game. He has been out all season with a strained right shoulder.

7. In other baseball news, Mookie Betts hit his major league-leading 16th home run in Boston’s 4-2 victory over Tampa. Jose Ramirez hit his 14th home run as the Cleveland Indians routed the Chicago Cubs 10-1 in their first meeting at Wrigley Field since the 2016 World Series. The Atlanta Braves beat the Phillies 3-1 in Philadelphia, keeping the Braves in front in the Eastern Division.

8. Finally a really good NBA playoff game! “Trench warfare” is the way Steve Kerr described it. James Harden scored 30 points and Chris Paul had 27 as the Houston Rockets beat the Golden State Warriors in Oakland 95-92 on Tuesday night. That ties the series at two wins apiece. Game 5 is Thursday night in Houston.

9. Wednesday is a huge playoff night. It’s Game 5 between the Cleveland Cavaliers and the Celtics in Boston, and the series is tied 2-2. And in hockey, it’s Game 7 in the East between Washington and Tampa Bay. The game is in Tampa.