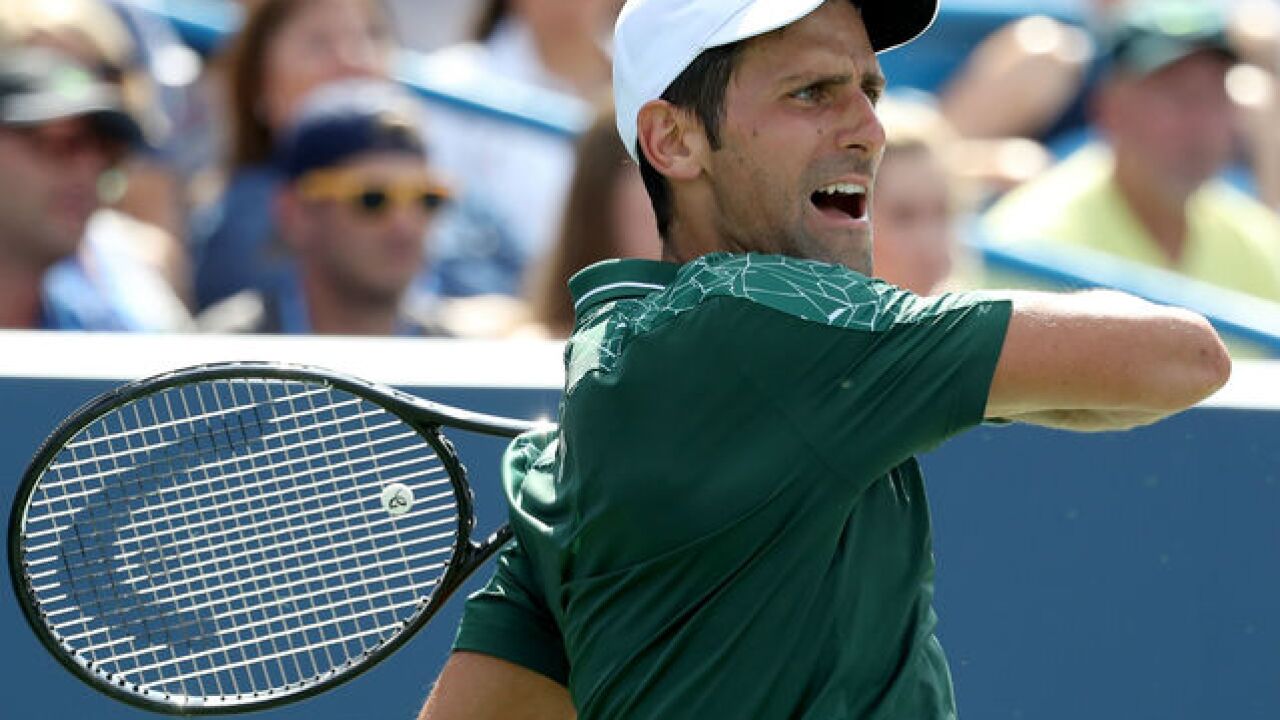 Image copyright 2018 Getty Images. All rights reserved. This material may not be published, broadcast, rewritten, or redistributed.
<p>MASON, OH - AUGUST 18: Novak Djokovic of Serbia returns a shot to Marin Cilic of Croatia during Day 8 of the Western and Southern Open at the Lindner Family Tennis Center on August 18, 2018 in Mason, Ohio. (Photo by Rob Carr/Getty Images)</p>

MASON, Ohio - (AP) -- Novak Djokovic is again so close to the one title that eludes him. And the same nemesis is standing in his way, all over again.

It's a moment in time: Djokovic vs. Federer for a title.

Djokovic closed in on a Western & Southern Open title with his 6-4, 3-6, 6-3 victory over Marin Cilic on Saturday. Then he watched Roger Federer advance to the finals as well when David Goffin retired in the second set with a shoulder injury.

Everyone knows who's favored in this one.

"It would be the greatest challenge in Cincinnati, without a doubt, because he's been dominating this tournament historically," Djokovic said.

The second-ranked Federer has won it an unprecedented seven times, going 7-for-7 in finals. Three of those wins came over Djokovic, who is 0-5 in the finals. The only player with better finals results at one tournament is Rafael Nadal, who is 11-0 in both French Open and Barcelona finals.

Federer has won 14 straight matches in Cincinnati and 17 of his last 18 sets. He's held 95 consecutive service games while dominating the tournament.

"It's great to be back in the finals, against Novak in particular," Federer said. "There's a lot riding on the match. It's great to refresh a rivalry we've had for many years."

On the women's side, No. 1 Simona Halep will play for the title a second year in a row, facing Kiki Bertens.

Djokovic is a tantalizing one victory away from the only ATP Masters 1000 title he's never claimed. Djokovic is trying to become the first to win all nine events since the series started in 1990.

"My sixth time, I'll try to win the title," he said. "Obviously, this time I'm hoping I get my hands on the trophy."

The seven-time champion won the first set 7-6 (3) against Goffin, who was struggling with his serve. Goffin got medical treatment on the back of his right shoulder, and retired after the second game of the second set -- 62 minutes into the match.

Now, it's on to his first Cincinnati final in three years. Federer won it in 2015 but was sidelined the last two years because of injuries.

"I feel like I'm trying to defend my title from way back when," he said.

Djokovic completed his long recovery from elbow surgery by winning Wimbledon for the fourth time last month. He then set out to get his hard-court game in form for the U.S. Open.

Frustrated by his ragged play early in his semifinal win over Milos Raonic a day earlier, Djokovic slammed his racket on the court, sending pieces of the frame into the air. The racket-busting became a turning point.

When he closed out the victory Saturday, he walked calmly to the net to congratulate Cilic and then raised both arms in triumph.

One more to go.

In the women's bracket, Halep reached the final for a second straight year, beating Aryna Sabalenka 6-3, 6-4. Like Djokovic, she's never won the title, losing both of her chances, including the title match last year to Garbine Muguruza.

Halep will be trying for her second title in eight days. She won her third title of the season last Sunday in Montreal.

"It's going to be a big challenge for me to play another final and win it," she said.

Bertens is an unexpected finalist, winning only one match during three previous appearances in Cincinnati. Her only title this season was at Charleston.

Known as more of a clay-court player, Bertens has reached a hard-court final for the first time, spending more time getting accustomed to the different style of play.

"I think also I'm less stressed," she said. "So before the match, I'm less nervous than I used to be. Before I was like, 'Oh, I play on center court and a lot of people are watching.' But now I'm just more relaxed."

A week of rain delays and double-duty days wore on players, many of whom wound up playing twice in a day. Kvitova faded in her second straight three-set match, ending her best showing in Cincinnati. She'd made five previous appearances in semifinals this season, winning each tournament.

"My legs were pretty heavy," Kvitova said. "I just couldn't really jump at all. It was very, very tiring, the second set, and I just think that I couldn't really find energy in the third one. I was really trying, but nothing."