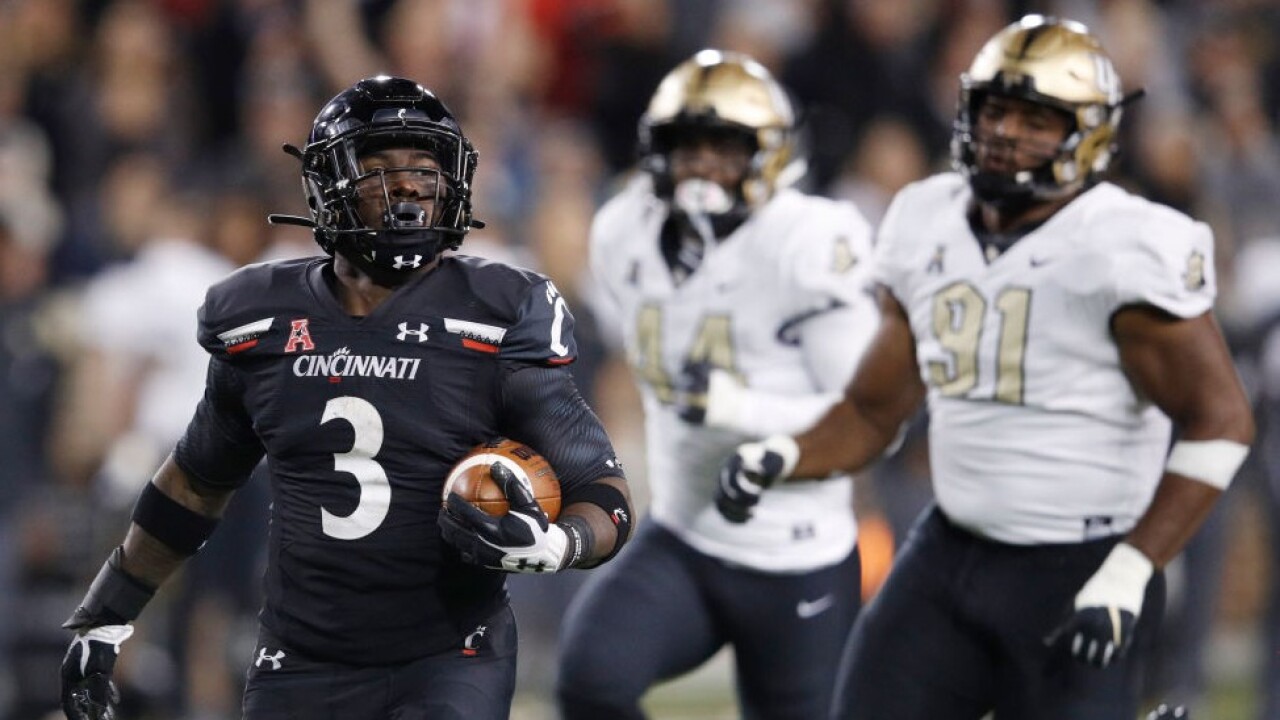 No. 17 Cincinnati isn't sneaking up on anyone anymore. Not with its highest national ranking in a decade.

The challenge for the Bearcats: Being mentally strong enough to handle its opponents' best efforts, starting Saturday night at rebuilding East Carolina.

"We put ourselves in a position to get a lot of people's best shots," coach Luke Fickell said.

The Bearcats (6-1, 3-0 American) have reeled off five straight wins to earn their best spot in the polls since Brian Kelly led them to a 12-0 regular season and a No. 4 ranking entering the Sugar Bowl.

They're tied with Temple for first place in the American's East Division and appear headed for a spot in the league title game against the West winner — No. 15 SMU visits No. 24 Memphis on Saturday night. The league champion will have a strong argument for a spot in the Cotton Bowl, which this year goes to the highest-ranked Group of Five team.

A stumble in Greenville, North Carolina, though, and all of that will slip through the Bearcats' hands.

"It's never easy, but I think that hopefully we're built for that and in the way that we kind of addressed and started the season, as opposed to having this big end-all goal that we always talked about and now you keep reminding them that they're on track to make their goal — that's not what we've said from the get-go," Fickell said. "I hope that's what helps us stay locked in and focused week by week."

It's been a struggle for the Pirates (3-5, 0-4), who need a miracle turnaround to avoid their fifth straight losing season — a run of futility that spans three permanent head coaches.

They haven't beaten a Top 25 opponent since 2014 and haven't defeated one from their own conference since they knocked off No. 18 Houston in 2009 when both schools were in Conference USA.

"They don't make a lot of mistakes," first-year coach Mike Houston said of Cincinnati. "We're going to have to be the things that we talk about almost every week because if we don't, they're not going to give you the ballgame."

Some other things to know as No. 17 Cincinnati plays at East Carolina on Saturday:

Cincinnati's defense has led the way, getting nine interceptions and five fumble recoveries in the last three games. The Bearcats are tied for second in the FBS with 19 takeaways overall — 11 interceptions, eight fumbles recovered. Cincinnati's plus-9 turnover margin is tied for sixth nationally with Illinois and trails Alabama (plus-13), San Jose State (plus-12), Ohio State and Oregon (plus-11) and San Diego State (plus-10).

When top running back Michael Warren II suffered a leg injury during a 24-13 win over Tulsa, junior Gerrid Doaks got the chance he'd awaited. He ran for a pair of touchdowns and turned a short pass into a 28-yard score, his first touchdowns in two years. Doaks has been limited by injuries, including a knee injury this season. The Bearcats will lean on him more heavily down the stretch.

Cincinnati's offense is looking for a better performance this time around. As Fickell put it, the Bearcats were "in a little bit of shock" when they led Tulsa only 10-7 at halftime, unable to move the ball against one of the conference's lowest-rated defenses. The Bearcats finished the game with fewer yards (377-317) and first downs (23-18) than Tulsa.

East Carolina has only one conference victory over a team not named Connecticut since 2015 — and it came in the Bearcats' last visit to Greenville, a 48-20 victory over Cincinnati two years ago that marks its only win in the series since 2001. The Bearcats earned some payback last November by routing the Pirates 56-6. ECU fired then-coach Scottie Montgomery five days later. "I'm sure this is one that was circled for them," Fickell said. "And the way we went there two years ago I think is a big deal to us. Not that it has a bearing on this game but just making sure you understand how people play at home, especially how people play when you're coming in ranked."