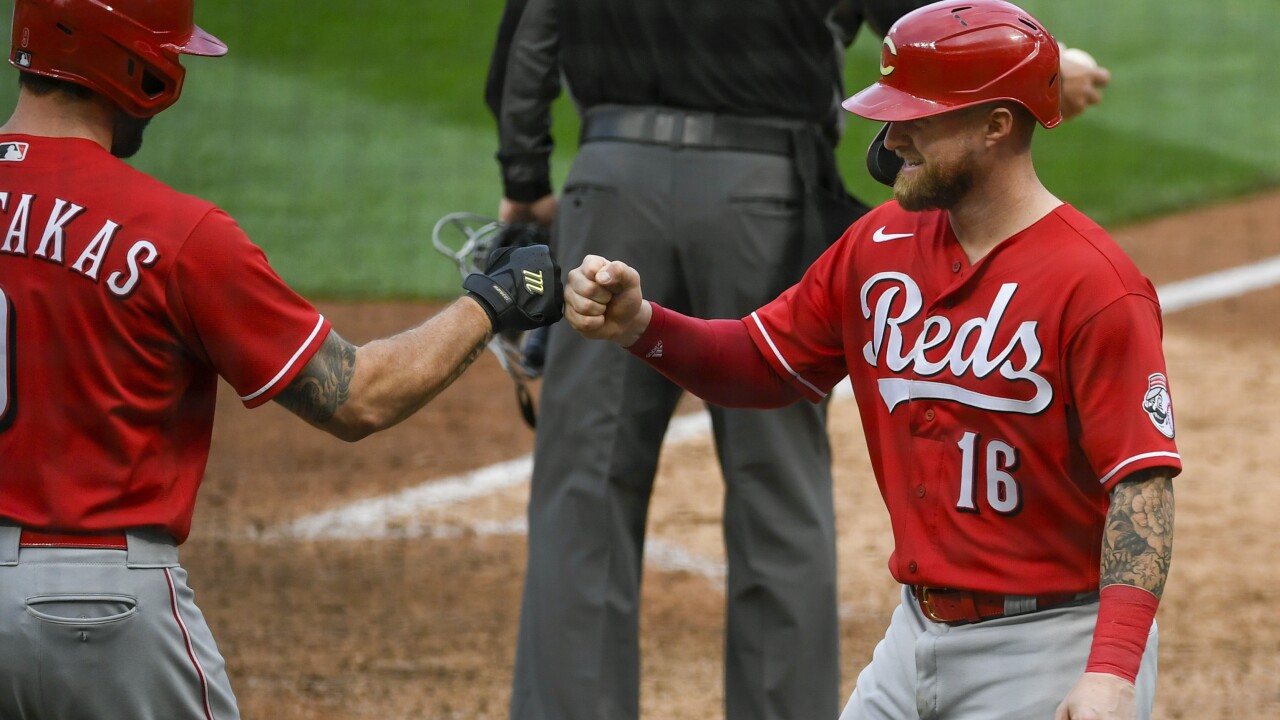 Craig Lassig/AP
Cincinnati Reds' Tucker Barnhart, right, celebrates with Mike Moustakas after scoring on a single by Eugenio Suárez during the tenth inning of a baseball game against the Minnesota Twins, Sunday, Sept. 27, 2020, in Minneapolis. (AP Photo/Craig Lassig)

MINNEAPOLIS (AP) — Tucker Barnhart and Eugenio Suárez had RBI singles in a three-run 10th inning, and the Cincinnati Reds beat the Minnesota Twins 5-3 Sunday in a regular-season finale that determined postseason matchups.

Cincinnati (31-29) became the National League’s seventh seed and will play No. 2 Atlanta in the first round starting Wednesday.

Minnesota (36-24) clinched its second straight American League Central title despite the defeat when the Chicago White Sox lost to the Cubs. The Twins host No. 6 Houston in the first round starting Tuesday.

Caleb Thielbar (2-1) started the 10th and got one out, then was replaced by Sergio Romo, who allowed the run-scoring hits and a bases-loaded walk to Joey Votto while failing to get any outs.

Cincinnati had high expectations after adding Nicholas Castellanos, Mike Moustakas and Shogo Akiyama in the offseason and having Trevor Bauer from the start. The Reds were 15-21 after losing 16-2 to the Cardinals on Sept. 1. They went 16-8 to finish the regular season and earn a playoff spot for the first time since 2013.

Hosting Houston could be important for the Twins, a major league-best 24-7 at home this season. Minnesota went 101-61 last year and won the AL Central by eight games, then was swept by the New York Yankees in the Division Series.

Gray balked in the first run in the fifth, rushing a throw when Jake Cave took off from third.

Twins: 3B Josh Donaldson (right calf cram) and CF Byron Buxton (hit on the helmet by a pitch on Friday) each missed his second straight game. Manager Rocco Baldelli said Buxton has mild concussion symptoms and is improving. Baldelli is hopeful Buxton will be ready for the first game of the playoffs. Donaldson has a history of calf ailments and missed 30 games earlier this season with a strain of the same calf.