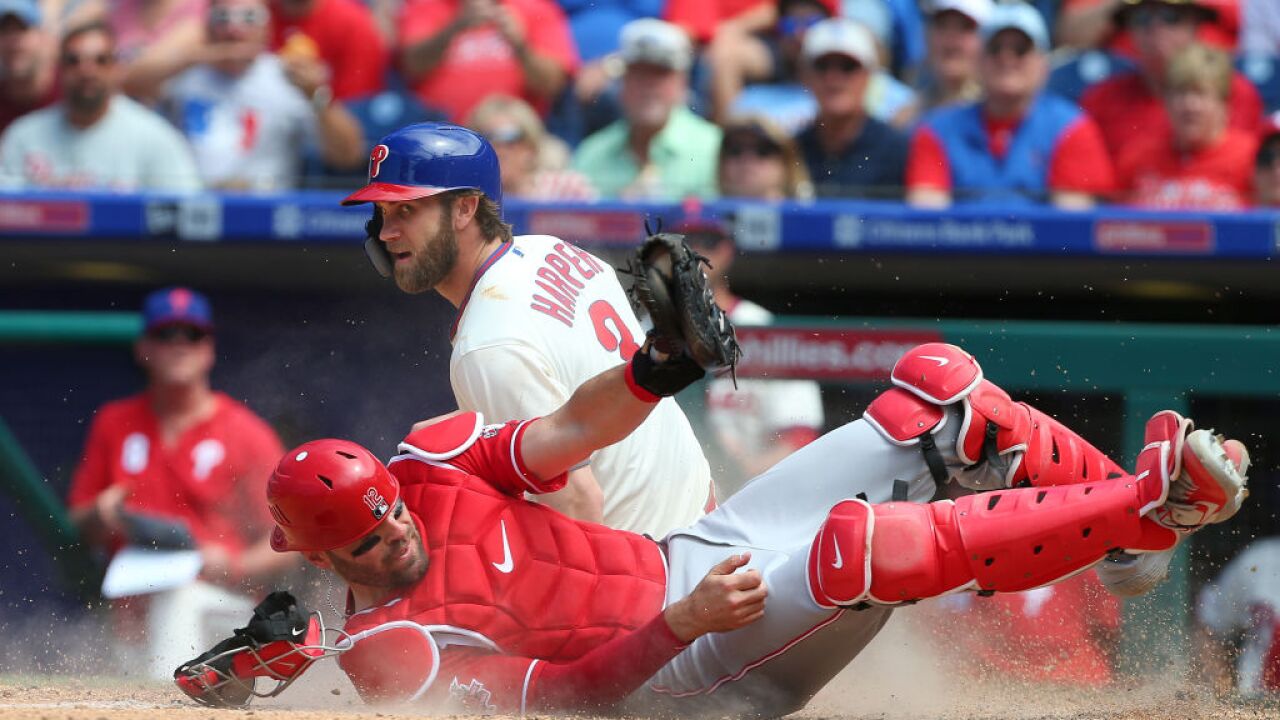 PHILADELPHIA (AP) — Joey Votto tied the game for Cincinnati with a two-out single in the seventh inning and Eugenio Suárez followed with the go-ahead hit to rally the Reds to over the Philadelphia Phillies 4-3 on Sunday and avoid a three-game sweep.

Bryce Harper got tangled up in a pair of plays at the plate, scoring from second on a misplayed popup but getting thrown out on an attempted steal of home.

Raisel Iglesias allowed the potential tying run to reach on first base in the ninth but tossed a scoreless inning for his 13th save in 14 chances. Zach Duke (3-1) pitched one-third of an inning, helping stop Philadelphia's four-game winning streak.

Rhys Hoskins drove in two runs for the Phillies on the misplayed popup.

Aaron Nola tossed four-hit ball over 6 2/3 innings as he tried to follow teammate Nick Pivetta with a second straight complete game for the Phillies. Pivetta struck out six in his first career complete game on Saturday.

Nola led 3-1 when he was chased after 6 2/3 innings with two on. José Álvarez (0-2) gave up a single that loaded the bases, and Votto lined a two-run that tied the game at 3-all.

Suárez followed with a single off Vince Velasquez came in and gave up the go-ahead single to Suarez to make it 4-3.

Trailing 1-0, the Phillies loaded the bases with two outs in the third against Sonny Grey. Hoskins hit a routine popup to first base that Votto appeared to lose in the sun. The ball plopped untouched on the field, and Maikel Franco scored from third and Harper from second. Harper initially was called out by plate umpire, but Harper got his right leg to the plate between the legs of catcher Curt Casali's legs and was ruled safe after a video review.

Jean Segura's sacrifice fly in the fifth made it 3-1. With two outs and Hoskins up, Harper broke for the plate and was tagged out by Casali. When Harper was a rookie with Washington in 2012, Harper stole home on Cole Hamels after the Phillies lefty drilled him in the game.

Harper had a chance to tie the game in the eighth but he struck out against Amir Garrett.

Phillies: C J.T. Realmuto appeared to get crossed up on a pitch in the seventh and took a 93 mph fastball off his left arm. He took a few warmup tosses from Nola and stayed in the game.

Reds: The Reds are off Monday and open a series in Cleveland with RHP Luis Castillo (6-1, 2.38 ERA) on the mound.

Phillies: RHP Jerad Eickhoff (3-3, 4.14 ERA) gets the call when the Phillies open a three-game series against Arizona on Monday.