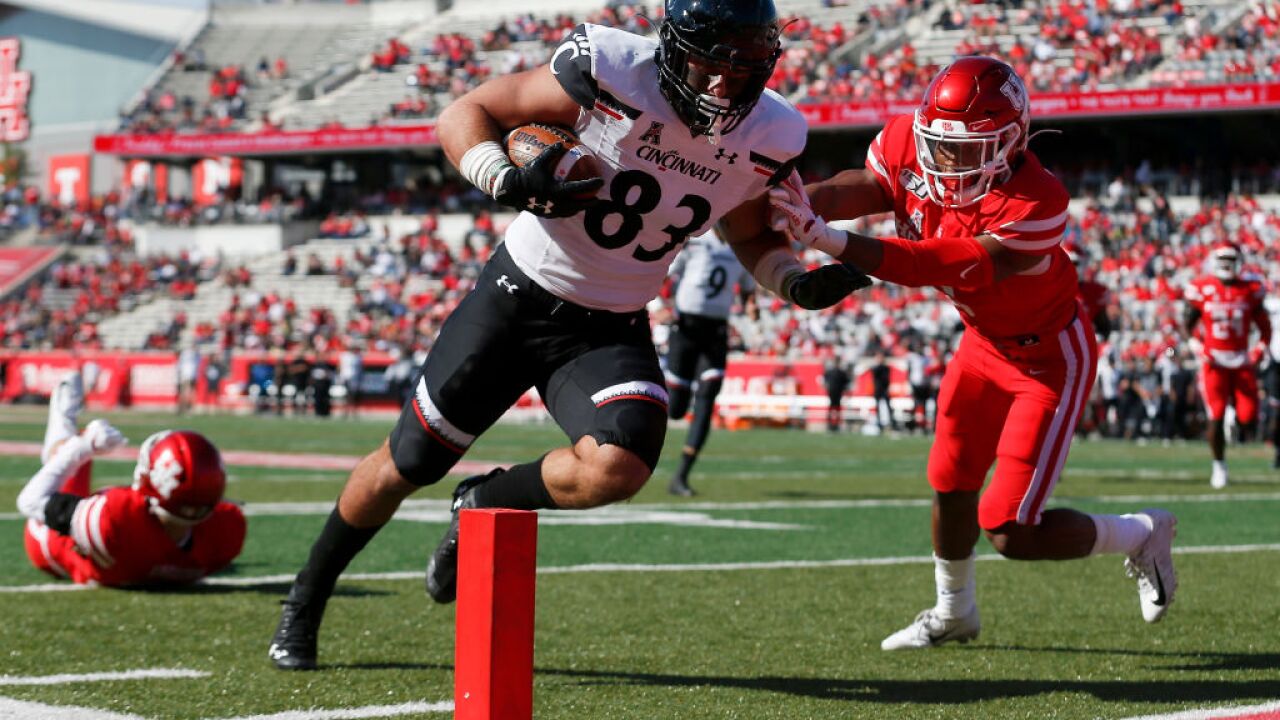 Tim Warner/Getty Images
HOUSTON, TX - OCTOBER 12: Josiah Deguara #83 of the Cincinnati Bearcats catches a pass for a touchdown defended by Deontay Anderson #2 of the Houston Cougars in the second quarter at TDECU Stadium on October 12, 2019 in Houston, Texas. (Photo by Tim Warner/Getty Images)

HOUSTON (AP) — Desmond Ridder passed for 263 yards and three touchdowns and No. 25 Cincinnati held off Houston's late surge to beat the Cougars 38-23 on Saturday.

The Bearcats (5-1, 2-0 American Athletic Conference) used a 21-point first half to pull away early and Perry Young's late 2-yard interception return for a touchdown sealed their fourth straight win.
Ridder finished 14 of 24 for 263 yards, three touchdowns and an interception. Ridder also had 11 carries for 50 yards and a score.

Trailing 21-10, Houston quarterback Clayton Tune re-energized the home crowd with a career-long 69-yard touchdown pass to Marquez Stevenson to start the second half.

The Cougars (2-4, 0-2) cut the lead to five with 9:09 left on Tune's 6-yard pass to Christian Trahan, but it wasn't enough to prevent Houston's first 0-2 start in conference play since joining the AAC.
Tune finished 9 of 27 for 184 yards, two touchdowns and three interceptions.

Cincinnati: A week after forcing four turnovers against Central Florida and limiting the Knights to their fewest points in 2019, Cincinnati's defense shined again. The Bearcats had four interceptions to run their season total to 13 and forced a fumble to help hold Houston to a season-low 23 points.

Houston: With D'Eriq King redshirting the rest of the season, Houston has been seeking his permanent replacement for this year. Tune, Bryson Smith and Logan Holgorsen all got playing time. Tune started, Smith was brought in to run the wildcat formation and Holgorsen got his first playing time in the first quarter.

Cincinnati should move up with No. 23 Memphis losing to Temple on Saturday and No. 20 Virginia losing to Miami on Friday.

Houston: The Cougars travel to UConn on Oct. 19 for the teams' first meeting since 2016.