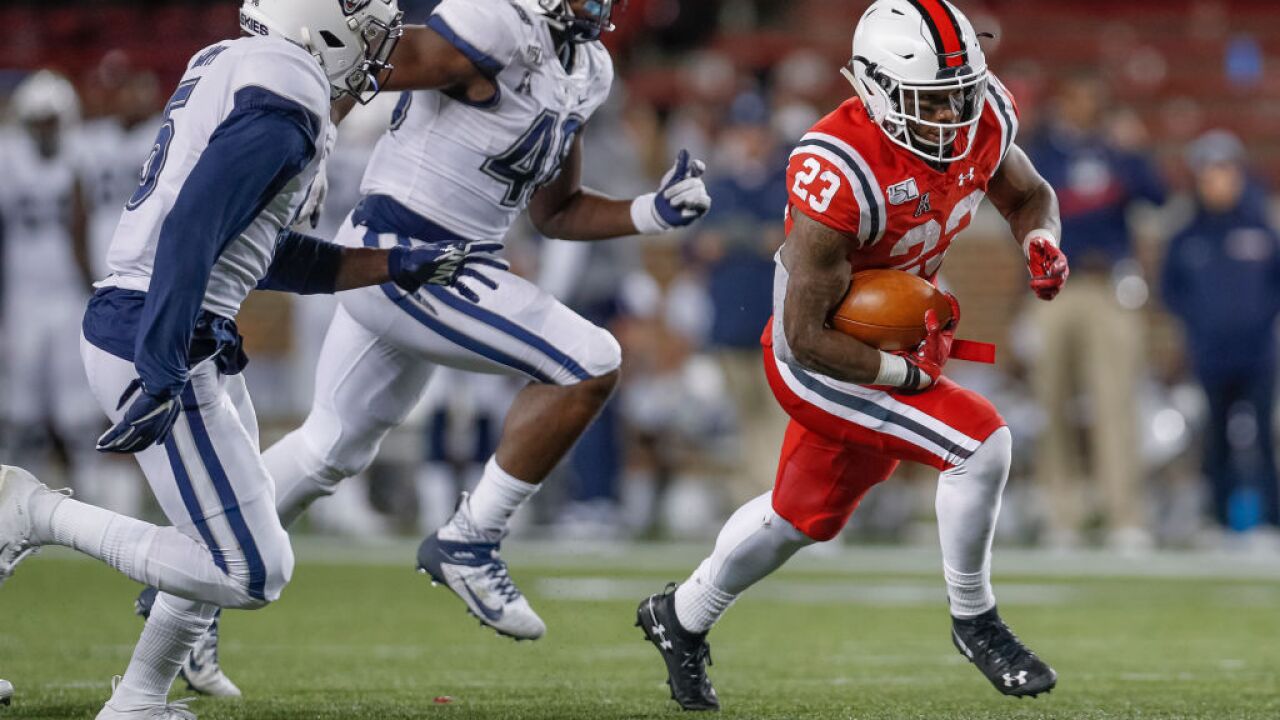 CINCINNATI (AP) — Desmond Ridder threw for a pair of touchdowns and Michael Warren II ran for two more during a dominant opening half, and No. 17 Cincinnati remained the only unbeaten team in American Athletic play by routing Connecticut 48-3 on Saturday.

The Bearcats (8-1, 5-0) retained the inside track for the conference title by ending their recent trend of slow starts . They led 38-0 at halftime against the conference's lowliest team.

UConn (2-8, 0-6) had two players ejected while losing its 17th straight conference game. The Huskies have dropped 24 of their last 25 against FBS teams. They fell to 0-9 all-time at Nippert Stadium.

After struggling in the opening half of wins over Tulsa and East Carolina , the Bearcats got rolling right away against a defense that has allowed the most points in the AAC. Ridder connected with tight end Josiah Deguara on touchdowns of 18 and 15 yards. Warren scored from 6 and 1 yards out, and Gerrid Doaks had a 53-yard run that set up his 1-yard touchdown in the first half.

Ridder went 13 of 23 for 136 yards and ran seven times for 94 yards. He was replaced in the third quarter with the Bearcats in control.

It was a bad game from the start for UConn. In the first 10 minutes, the Huskies gave up a pair of touchdowns, got a punt blocked, and had linebacker Omar Fortt ejected for targeting a receiver. Defensive lineman Dillon Harris also was ejected in the second quarter for a high hit on Ridder that caused a fumble.

Cincinnati's Darrick Forrest picked off Zack Zergiotis, giving the Bearcats 13 interceptions and 21 takeaways for the season, among the best nationally. Cincinnati has 11 interceptions and five fumble recoveries in the last five games.

Zergiotis was 4 of 14 for 35 yards in the first half with the interception, the true freshman's fourth turnover in the last two games. Mike Beaudry started the second half and went 6 of 9 for 35 yards. Kevin Mensah ran for 115 yards in his third straight triple-digit game.

UConn has lost its last two games against Cincinnati by a combined 97-10.

The Bearcats harped on playing with more focus after their ragged wins against Tulsa and East Carolina and were sharp in all aspects of their homecoming game.

The Bearcats put themselves in position to improve upon their highest ranking since 2009, when they got as high as No. 4 during a perfect regular season. The Huskies fell to 3-32 against ranked teams.

UConn has a bye before hosting East Carolina on Nov. 23.