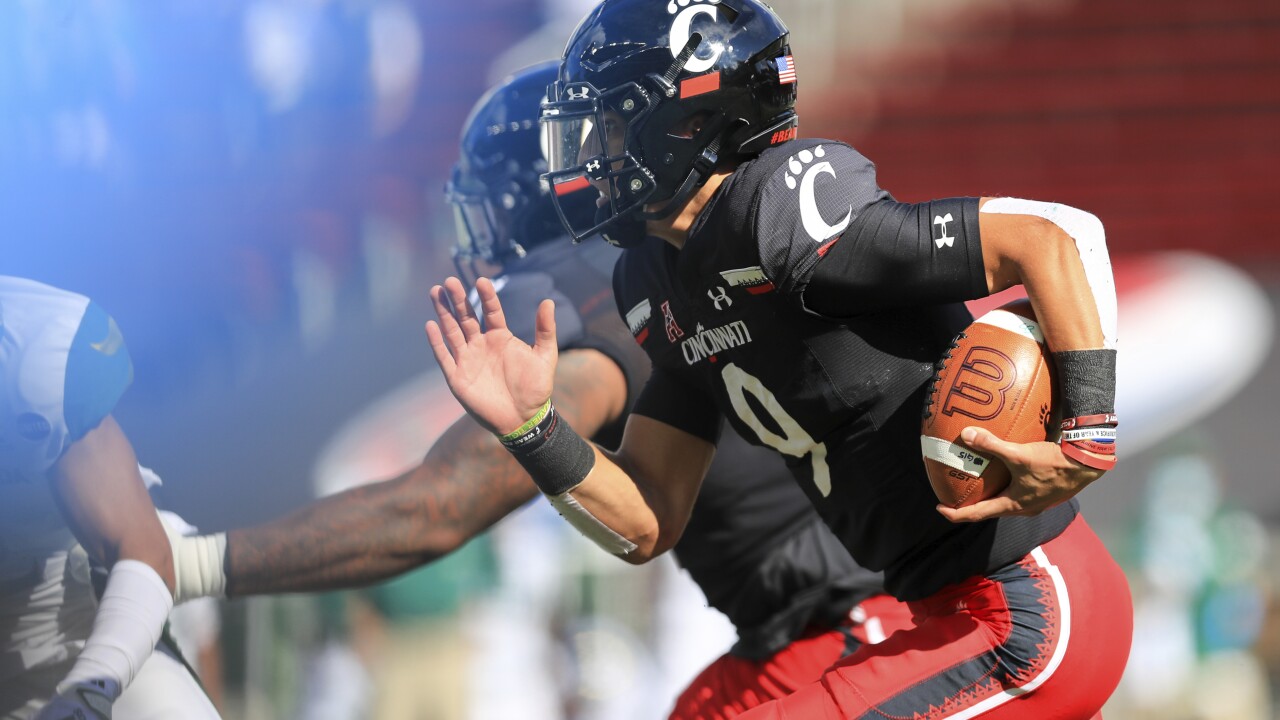 CINCINNATI (AP) — Gerrid Doaks ran for 102 yards and a touchdown, Tre Tucker returned a kickoff 97 yards for a score and No. 15 Cincinnati had five interceptions in a 28-7 victory over South Florida on Saturday.

Doaks had his first 100-yard rushing game since November 2019 when he ran for 123 against UConn.

Tucker returned the kickoff late in the third quarter to put Cincinnati ahead 28-7. It was the first kick return TD by a Bearcats player since Ralph David Abernathy IV in the Liberty Bowl against Vanderbilt in December 2011.

The game started sloppily with four turnovers, two by each team, in the first 11 snaps.

South Florida used four quarterbacks, with sophmore Jordan McCloud going 12 of 21 for 137 yards with two interceptions. Freshman Katravis Marsh got the start, but he threw three interceptions, including two in his first four attempts.

USF tied a school record with the five interceptions.

The Bearcats ran for 189 yards, and managing only 69 last week in a win over Army.

Doaks who had 89 rushing yards in the first half, capped a 13-play, 92-yard drive with a 10-yard TD run to put Cincinnati ahead 7-0 in the first quarter.

Cincinnati (3-0) was denied its second touchdown when safety Chris Townsel wrestled the ball out of Jayshon Jackson’s arms for an interception in the end zone.

It was one of six turnovers in the first half, three by each team. Bearcats cornerback Coby Bryant had two interceptions in the half, his first two-interception game since October 2018 against Temple.

With 39 seconds left in the first half, Desmond Ridder found tight end Josh Whyle in the corner of the end zone for a 13-yard touchdown, putting Cincinnati ahead 14-0.

Ridder was 16 for 26 with 143 yards and two touchdowns with a career-high three interceptions.

Bearcats tight end Bruno Labelle caught a 3-yard TD pass from Ridder to make it 21-0 with 4:01 left in the third quarter.

Johnny Ford scored on a 2-yard run late in the third quarter for USF to make the score 21-7, but the Bearcats immediately answered with Tucker’s kick return.

USF fell to 1-2 after having last week’s game against Florida Atlantic postponed due to issues related to Coronavirus. The Bulls had 12 players unavailable for Saturday’s game, including eight on defense.

Cincinnati tied a school record with its 15th straight win at home, the sixth-longest active streak among FBS schools. The Bearcats last won 15 straight home games from Nov. 8, 1952 to Nov. 13, 1954. Cincinnati is one of seven teams in the FBS to go undefeated at home the last two seasons, joining Ohio State, UAB, Central Florida, Clemson, Oklahoma, and Notre Dame.

Cincinnati plays at Tulsa on Oct. 17.