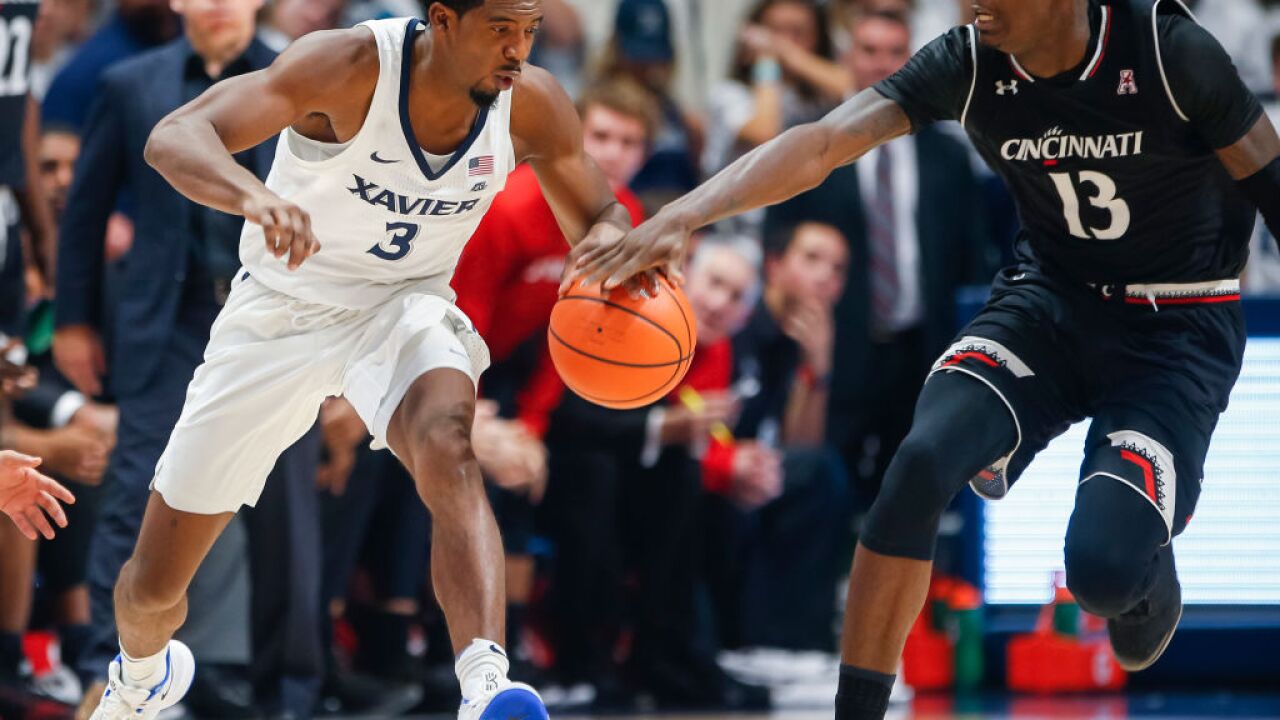 CINCINNATI – This year’s Crosstown Shootout wasn’t a blood bath. There were no brawls, no handshake-line altercations, and only a few verbal spats.

The 87th meeting between the UC Bearcats and the Xavier Musketeers was typical of college basketball in early December: two teams trying to find their identity, playing to their strengths and weaknesses, and allowing their star players to take over.

Led by Naji Marshall, who tied a career high with 31 points and had a career-high five steals, Xavier was the better team for the most part in their 73-66 victory at a raucous Cintas Center before a standing-room-only crowd of 10,811.

The Musketeers (9-1) led by as many as 16 points in the second half and the Bearcats never got closer than eight down the stretch.

“This game’s all about toughness and togetherness,” said Xavier head coach Travis Steele. “Our players were ready. I felt like our guys were going to play better. I felt like the mentality was right.”

The Musketeers’ only loss this season was to a good Florida team, but Steele has been waiting for his team to put 40 minutes together at both ends of the floor.

The Bearcats won the rebounding battle, but overall Steele was pleased with the effort. The Muskies committed 11 turnovers but had 17 assists, including a season-high eight assists by point guard Quentin Goodin.

“We have to keep pushing our petal down,” Steele said. “We took a big step forward. This game is all about toughness and togetherness. We didn’t play our best basketball tonight, far from it.”

Marshall’s performance helped. The 31 points were his most since also scoring 31 at St. John’s on Feb. 28, 2019. He had eight rebounds on Saturday and a career-high 12 made field goals.

“Naji’s a big-time player,” Steele said. “I believe in him. He was ready for it. He worked very hard for this moment. It’s a player’s game. You have to be the aggressor. He was the best player on the floor and it wasn’t really close.”

The Bearcats (6-3) are still finding themselves under first-year coach John Brannen, and it showed on Saturday.

With three returning starters, four transfers and five freshmen, it is taking time for Brannen to implement his style following the departure of Mick Cronin to UCLA.

Cumberland went scoreless until his layup with 5:08 remaining in the first half. He finished with 11 points but went 1-for-8 from three-point range and 4-for-14 overall. He committed four turnovers and had a couple bad misses from long range.

“He gutted it out,” said Brannen. “I can’t speak for another man’s pain. I know he was hurting. If he wants to be out there, we’re going to ride him. He’s an elite defender, but I don’t think he was able to defend at the level he’s accustomed. We put him on Naji (Marshall) midway through the first half. Normally that would suffice. It didn’t.”

It had been a rough season for Cumberland, who has struggled to adapt to Brannen’s coaching style. He was benched one game after missing time in the preseason with an ankle injury. Cumberland scored 19 points in last year’s Shootout, but without him at full strength on Saturday, the Bearcats had nobody to lean on, unlike Xavier with Marshall.

“Marshall really took over the game,” said Brannen. “The only thing I was disappointed with … was our defensive intensity and focus on guarding the basketball. We’ve had that issue in the second half of games for most of the early season. We fought there until the end, but at the end of the day, we have to play at a higher level. Tip your hat to Naji and the performance he had”.

It was Brannen’s first experience in the Shootout after spending four years as head coach at Northern Kentucky University. He coached at Cintas Center once during the regular season while at NKU. But nothing could prepare him for what he was facing on Saturday afternoon.

In contrast to past years, Saturday’s game mostly went off without incident, aside from some pushing and shoving that resulted in a double technical on Xavier’s Tyrique Jones and UC’s Keith Williams with 13.8 seconds left.

Jones had 10 points and nine rebounds after a slow start. Williams led UC with 15 points.

But the series has had its share of drama in recent years: the no-handshake between Bearcats coach Bob Huggins and Xavier coach Pete Gillen in 1994, the ugly brawl in 2011, and two years ago, the verbal exchange between UC coach Mick Cronin and XU guard J.P. Macura.

“This is the best rivalry in all of college basketball,” said Steele, in his second season as head coach after serving 10 years as an assistant. “I’ve been a part of 11 of these. You remember every moment of every single game.”

The Musketeers have dominated the series at Cintas Center, winning eight straight games. The last loss against the Bearcats at Cintas was a 75-55 defeat on Dec. 14, 2001 under head coach Thad Matta.

UC won last year’s meeting 62-47 at the newly-renovated Fifth Third Arena. But it had been a different story in Cintas Center most years.

“The atmosphere played a factor in the game,” said UC center Chris Vogt. “It made it hard on us to get our offense going. We’ve got to get used to playing in environments like this.”

Saturday’s game, as with most Shootouts, was not for the meek.

Bryce Moore’s three-pointer gave Xavier its largest lead, 32-24, late in the first half. The Musketeers led by three points at halftime but went on a 19-6 run after halftime.

Marshall’s long three-pointer put the Musketeers ahead 45-35 with 14:45 left. In last year’s loss at Fifth Third Arena, he scored only eight points.

“Last year, I played pretty bad,” Marshall said. “You just have to work hard and bounce back. But it’s really not that much about me, it’s about the team. It was an unbelievable atmosphere. I’m just glad we came out with the win.”

Xavier led by as many as 16 points in the second half on Saturday. A 7-0 run by the Bearcats cut their deficit to 51-42 with nine minutes left, but they could not sustain the run.

“They came out in the second half and punched us in the mouth,” said Bearcats guard Jaevin Cumberland, who scored 14 points. “We never recovered.”