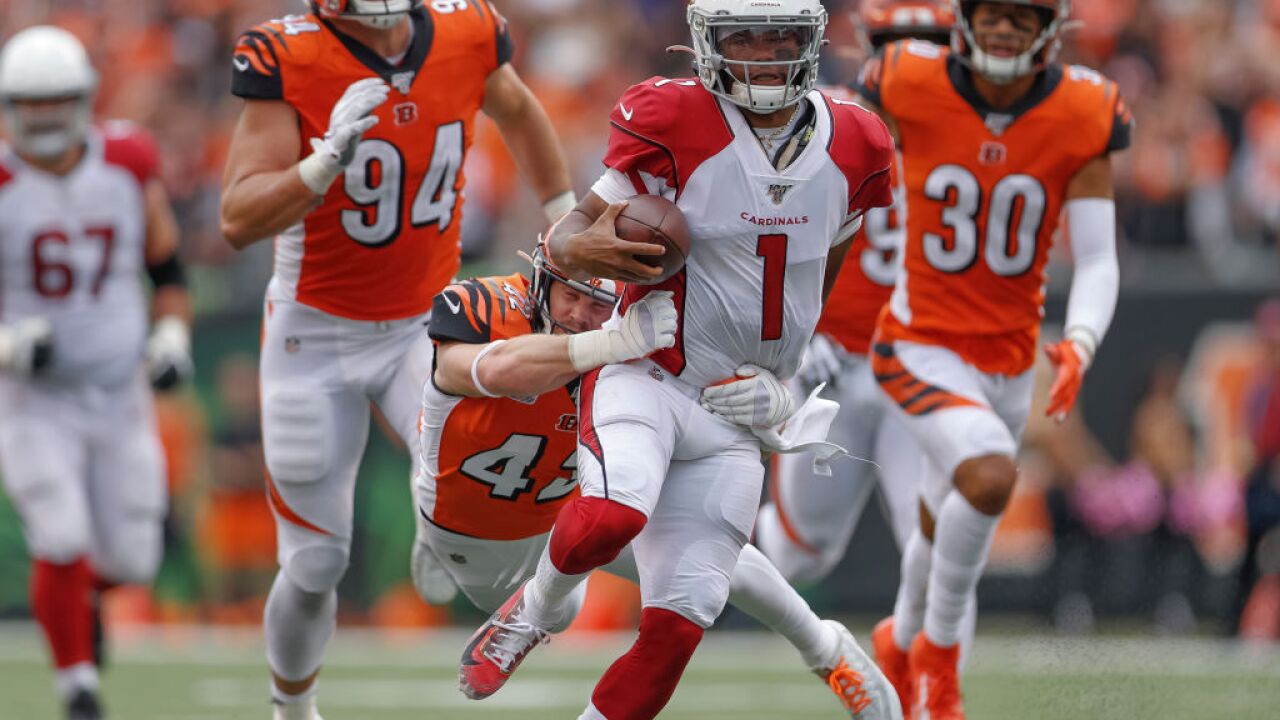 Michael Hickey/Getty Images
CINCINNATI, OH - OCTOBER 06: Kyler Murray #1 of the Arizona Cardinals runs the ball late in the fourth quarter to set up the game the winning field goal as Clayton Fejedelem #42 of the Cincinnati Bengals makes the tackle at Paul Brown Stadium on October 6, 2019 in Cincinnati, Ohio. (Photo by Michael Hickey/Getty Images)

CINCINNATI – On the Bengals’ opening possession on Sunday against Arizona, they marched 65 yards on 12 plays. The result was a field goal.

On the Cardinals’ first offensive possession, they drove 68 yards in nine plays. The result for them was a touchdown.

The fourth quarter featured a valiant 14-point comeback by the Bengals who then lost 26-23 on a field goal on the game’s final play.

But, the final four minutes on Sunday weren’t as telling as the first four minutes. In the NFL, where the margin between winning and losing is slim, missed opportunities in the red zone often are magnified.

The Bengals are 0-5. They can point to a handful of plays in each of those losses that could have swung things in their favor. And, that’s the problem. For most teams in this league, the difference IS one or two plays.

“When you’re down there, you have to score touchdowns,” Bengals quarterback Andy Dalton said. “There’s a huge difference between seven and three points. We saw that today. There definitely are some execution issues. We have to take a good look at it, because it’s obviously hurting us.”

The Bengals came into Sunday’s game 3-of-11 in the red zone, which was second-worst in the league. The only team worse than them was the Miami Dolphins. After Sunday’s loss, that stat looks even worse for the Bengals: 4-of-14, 28%. The Dolphins were around 16%.

On Sunday, twice the Bengals drove to the Cardinals’ 5-yard line, and twice they settled for Randy Bullock 23-yard field goals. Another drive ended at the 30-yard line, and a 48-yard kick.

“If we started turning three (points) into seven, we’d have blown them out,” said Bengals wide receiver Tyler Boyd.

When the Bengals get inside the 20, the offense stalls, for one reason or another.

On Sunday, the Bengals had second-and-one at the 13, but Dalton fumbled and recovered for a loss of three yards. Auden Tate then dropped a third-down pass on a slant route.

“He put that in perfect position,” Tate said. “Dropped ball. I’ve got to catch that.”

Later, with first-and-goal at the 8, a false start penalty on left guard Michael Jordan set the Bengals back.

Last week at Pittsburgh, the Bengals recovered a fumble deep in Steelers’ territory. A potential TD pass went off Tyler Eifert’s hands and the result again was a field goal.

Three of the Bengals’ five losses have been by four points or less. On one hand, you can say they are close. On the other hand, they simply aren’t good enough to execute when they need to most.

“It’s a great question,” said Bengals head coach Zac Taylor, when asked why his team has difficulty converting TDs in the red zone. “We’ll watch (the tape) and see. We’re leaving four points on the board on two of those of those drives, that’s eight. That’s the thing that has really killed us the past couple weeks.”

This is a category that has digressed for the Bengals since last season, at least through the first five games. In 2018, the Bengals ranked third in the NFL, converting better than 71% of their red zone trips into touchdowns.

The missed opportunities on Sunday wasted a solid afternoon from Dalton who after a slow start, finished 27 of 38 for 262 yards and two touchdowns. He did not throw an interception for the first time in three weeks. His final rating was 107.6.

After rushing for 60 yards on the opening drive, Joe Mixon was limited to only 33. But he was of little use once the Bengals got behind by two touchdowns late.

Another missed opportunity came in the third quarter. The Bengals who were trailing 13-9, had fourth-and-one at their own 42. Rather than go under center and sneak for the yard, Dalton ran out of the shotgun and was stopped for no gain.

The Cardinals had allowed the most sacks in the NFL coming in, but the Bengals barely bothered rookie QB Kyler Murray who was sacked just once while passing for 253 yards and rushing for another 93 and a TD.

Despite a stirring fourth-quarter comeback, the Bengals have lost 12 of 13 games dating to last season.

“They’re all tough,” Taylor said. “And they all count the same, unfortunately.”

The Bengals miss A.J. Green for a number of reasons, but they especially miss him in the red zone. Green who is out indefinitely with an ankle injury has 63 career touchdown receptions, 37 of which have come in the red zone. With Green out, Eifert non-existent and the team struggling to scheme and execute in this area, the Bengals are going to struggle to score points.

“When you think about it, in games that could have swung the other way, we could be 3-2 right now,” said Tate. “You can’t go back in the past and change stuff. You’ve just got to move forward and work on the things you need to do.”

Beating the previously winless Cardinals was going to be a challenge without injured John Ross who had accounted for 328 of the team’s 1,226 total yards and three of their six touchdowns through four weeks. To make matters worse, receiver Alex Erickson left Sunday’s game in the second quarter with a possible concussion.

Andre Smith left with an ankle injury in the third quarter, meaning the Bengals were down to fourth-string tackle John Jerry.

Give the Bengals credit for overcoming the odds, for ending their seven-quarter streak without a touchdown, and managing to tie the score on Sunday with two minutes remaining. In the end, the missed chances a couple of hours earlier, came back to bite them. They usually do.

“We didn’t do enough to get it done,” said Taylor, who is still looking for his first win as an NFL head coach. “It’s frustrating because we thought we were right there. We're in position to win these games.”