FC Cincinnati win snatched away in second half extra time 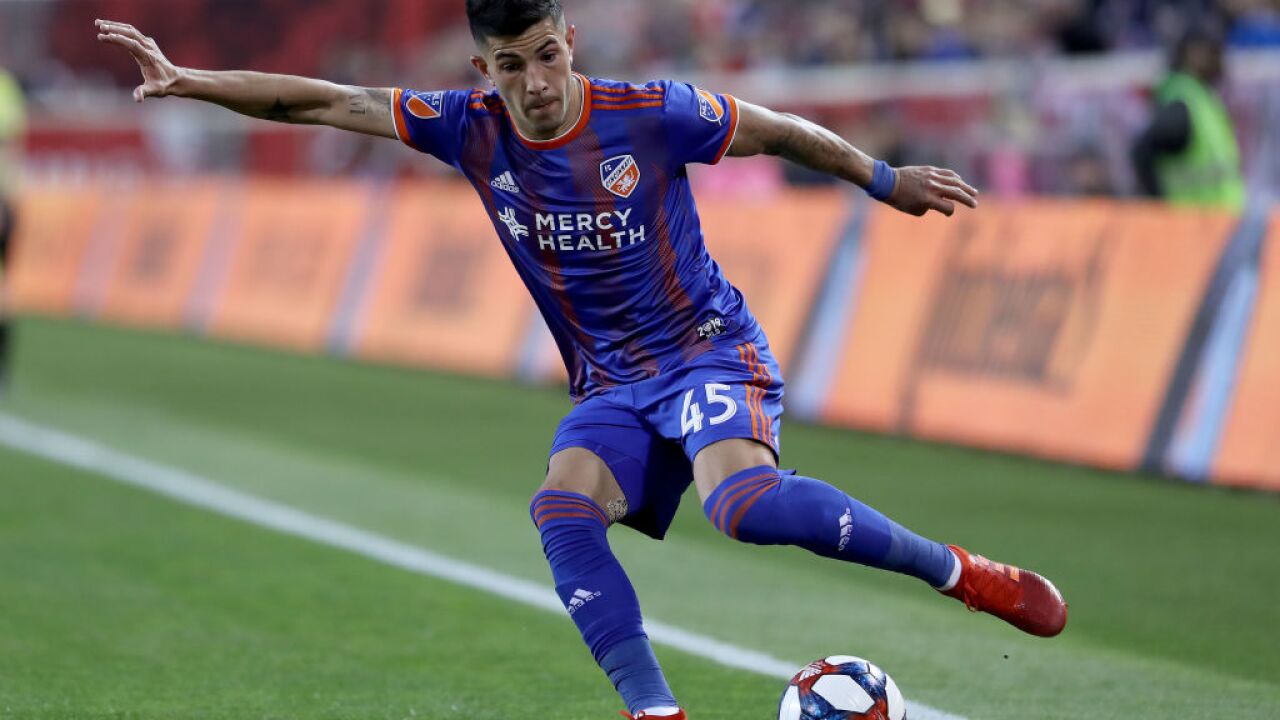 CINCINNATI — FC Cincinnati was minutes away from sending its loyal fans out on a win, but an allowed goal in second-half stoppage time meant the hosts settled for a draw in the final home game of the club’s inaugural MLS season.

Allan Cruz gave FCC a lead in the 40th minute, and the Orange and Blue were closing in on their fifth clean sheet of the year before Benji Michel scored the equalizer for Orlando, ending the game in a 1-1 draw Sunday in front of 25,652 fans at Nippert Stadium.

The late letdown was the 2019 campaign in a nutshell for FCC, which now has the record for most goals allowed in a season with one game left Oct. 6 at D.C. United, but fans were still chanting and cheering the players and coaches off the field. The tie wasn’t how the Orange and Blue wanted to finish at home; however, it did mean Orlando City is out of the playoff picture. Orlando needed a win to even have a chance.

FC Cincinnati wanted to give fans a win in the final home game on “Fan Appreciation Night,” and they came out attacking like a team fighting for something.

The Orange and Blue had nine shots in the first half (compared to Orlando’s four), including four on frame, and finished with 16 attempts. Emmanuel Ledesma curled a shot from the right side, just wide of the far post in the 10th minute for the first chance of the night, and Roland Lamah also had a near goal that hit off the cross bar in the 36th minute.

Finally in the 40th minute, Ledesma found Cruz wide open near the penalty spot, and Cruz tucked it to the near post for his team-leading seventh goal of the season.

“I felt like we could’ve come out with a win,” winger Joe Gyau said. “We played well together today, like just from the beginning, from the beginning whistle we put pressure on them. We could’ve put away a couple more of our chances in the first half. But, I think the overall performance was very, very good. We wanted to send the fans off at the end of the season with a win. You know it’s a bit unfortunate we came out with the tie, though.”

FCC had taken the first lead just six times in the previous 14 matches, going 3-2-1 in those games, and four of those were goals by Cruz.

Cruz was named the team’s MVP last weekend. The 23-year-old Costa Rican international is set to return on a guaranteed contract next season with two club options after that.

“The hard work that I did this season was reflected,” Cruz said through a team translator. “Now, it is my time, if I am still here with the team, to demonstrate why I was the MVP and capitalize on the opportunities that come my way.”

Orlando City actually had something to play for with the playoffs on the line, and that led to a physical matchup on both sides. There were nine fouls in the first half, and a couple non-calls that could have led to penalties for FC Cincinnati. Lamah was plowed through in the box during a collision with Orlando goalkeeper Brian Rowe and a defender who also appeared to get a hand on the ball, and Cruz was taken down on the edge of the box without a whistle.

Right before halftime, Cruz was shown his fifth yellow card of the season for simulation when he appeared to trip while feeding a backward pass to Frankie Amaya. That call also could have gone the other way but the official quickly continued play after showing the card, which will mean Cruz is unavailable next week in the season finale at D.C. United.

“I didn’t see it on television and slow motion, so I am not sure,” coach Ron Jans said when asked about the potential penalties. “I had my doubts with the goalkeeper with Roland (Lamah). He was sandwiched, so I am not sure about that one. The other one I did not think it was a penalty. But I think we should have done more with the moments we had to kill the game because there were a lot of moments we could have scored to make it two-nil and I don’t think Orlando was mentally prepared to come back from two-nil. We didn’t do it and in the end they scored the equalizer.”

3. Pirates of the Caribbean

Jans said a couple weeks ago he wanted his players to be the “Pirates of the Caribbean” and disrupt the playoff picture as much as possible for the opponents.

That they did. In the last four games, FCC got points against three teams that were still competing for a playoff spot.

FC Cincinnati nearly collected its fifth clean sheet of the season and third in the last four matches but Michel scored in the 91st minute to prevent it. Although the club has allowed a record 75 goals this season (FCC was tied with Orlando City’s 2018 team for the previous record), the defense has been the greatest area of improvement down the stretch.

Most of the back line is set to return next year, as center backs Maikel van der Werff and Kendall Waston and fullbacks Greg Garza and Mathieu Deplagne are all on guaranteed contracts through at least 2020, and backup left back Andrew Gutman remains on loan with the club next year.

“It is so disappointing because I believe it was our game and then even after the 1-1, (Emmanuel Ledesma) had a great chance to win the game,” Jans said. “So for the last home game for players, for fans and for everybody, it would have been great to finish with a victory and we should have done that. But we didn’t do that and that leaves us with the last four games and maybe a little more cautious on the defensive and that we can compete with the other MLS teams and that is a good take away for next season. Maybe not to emphasis too much the defensive part, but with this team the qualities fits best to press more, not too high and a little space away behind your back four. With pace of our attackers, it is good to use the space behind the back four of the opponent. So I am pretty satisfied with the last couple weeks and what the guys did.”