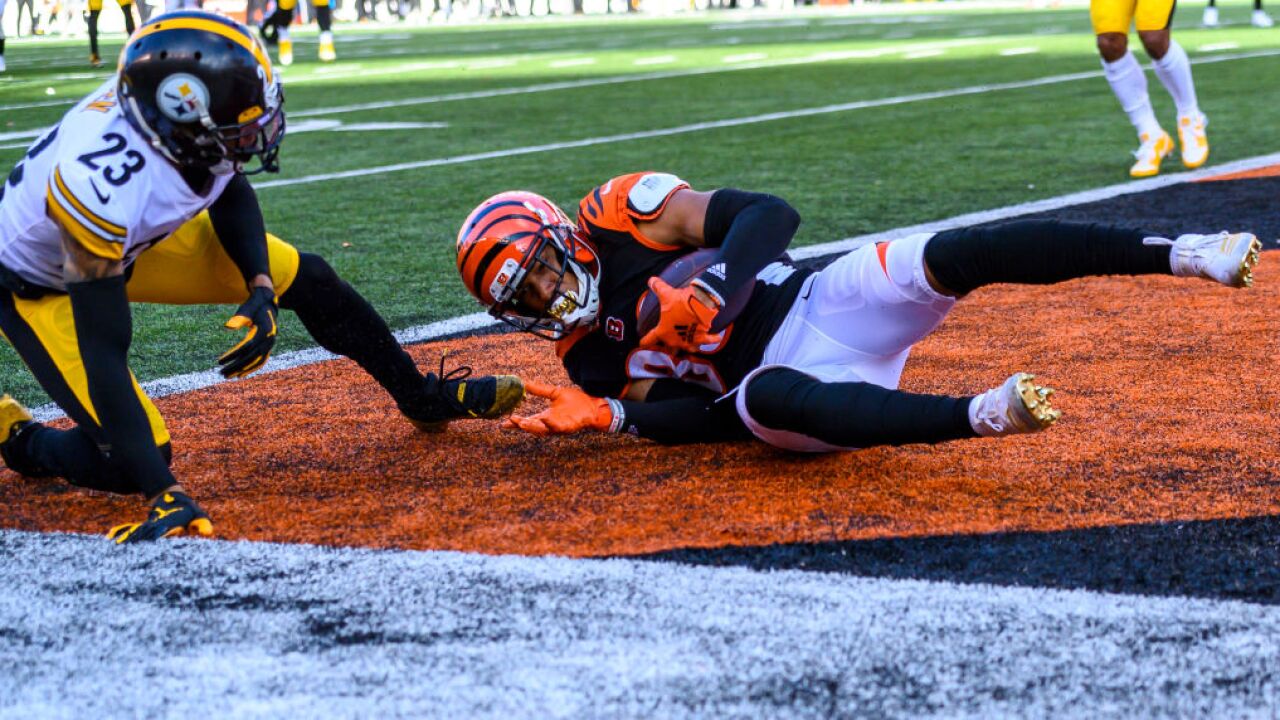 CINCINNATI (AP) — Devlin “Duck” Hodges took over for struggling Mason Rudolph and threw a 79-yard touchdown pass Sunday, sparking the depleted Pittsburgh Steelers to a 16-10 victory that kept the Cincinnati Bengals the only winless team in the NFL.

Hodges connected with James Washington on the game-turning play in the third quarter, leaving Pittsburgh (6-5) with a quarterback decision as it moves forward without Ben Roethlisberger.

The Steelers’ defense has steadied them through the transition, and it had a major impact in Pittsburgh’s 10th straight win over the hapless Bengals (0-11), who set franchise records for worst start and longest losing streak.

Tyler Boyd made a catch and was stripped by Devin Bush at the Steelers' 8-yard line in the fourth quarter, preserving the lead. Bud Depree sacked Ryan Finley and forced a fumble that he recovered with 2:38 left, closing it out.

What’s left of the Steelers’ offense — hollowed out by injuries and a suspension — struggled in the first half and prompted coach Mike Tomlin to switch from Rudolph to Hodges, who provided an immediate boost. His touchdown pass to Washington gave the Steelers a 10-7 lead and got thousands of Terrible Towels twirling at Paul Brown Stadium.

Hodges filled in for one game after Rudolph suffered a concussion and directed a 24-17 win over the Chargers on Oct. 13. Tomlin went back to Rudolph as soon as he was healthy.

Now, he’s got a big decision as the Steelers try to stay in the playoff chase.

Hodges ran an offense missing three stars after a 21-7 loss to Cleveland that ended with ugliness — Myles Garrett clubbing Rudolph with the QB’s own helmet. Steelers center Maurkice Pouncey served the first of his two-game suspension Sunday for kicking and punching Garrett in the melee.

Also, receiver JuJu Smith-Schuster was out with a concussion and running back James Conner had a shoulder injury from the Cleveland game. The Steelers got what they needed out of what was left, with Hodges leading the way. He went 5 of 11 for 118 yards with two sacks. Rookie Benny Snell Jr. returned from a knee injury and ran for 98 yards.

If the Bengals were going to end that long losing streak against their Ohio River rival, this was their chance. Instead, they saw another one slip away in the end, just like all the others.

The Bengals repeatedly dodged disaster in the first half and led 7-3, only their third halftime lead this season. They fumbled the opening kickoff but recovered. Finley was sacked and fumbled on Cincinnati’s second possession, but Giovani Bernard fell on the ball. Finley later was sacked just in front of the goal line, avoiding a safety.

Steelers: CB Artie Burns was out with a knee injury.

Bengals: Alex Redmond was expected to start at left guard but hurt his left elbow during pregame warmups and didn’t play.