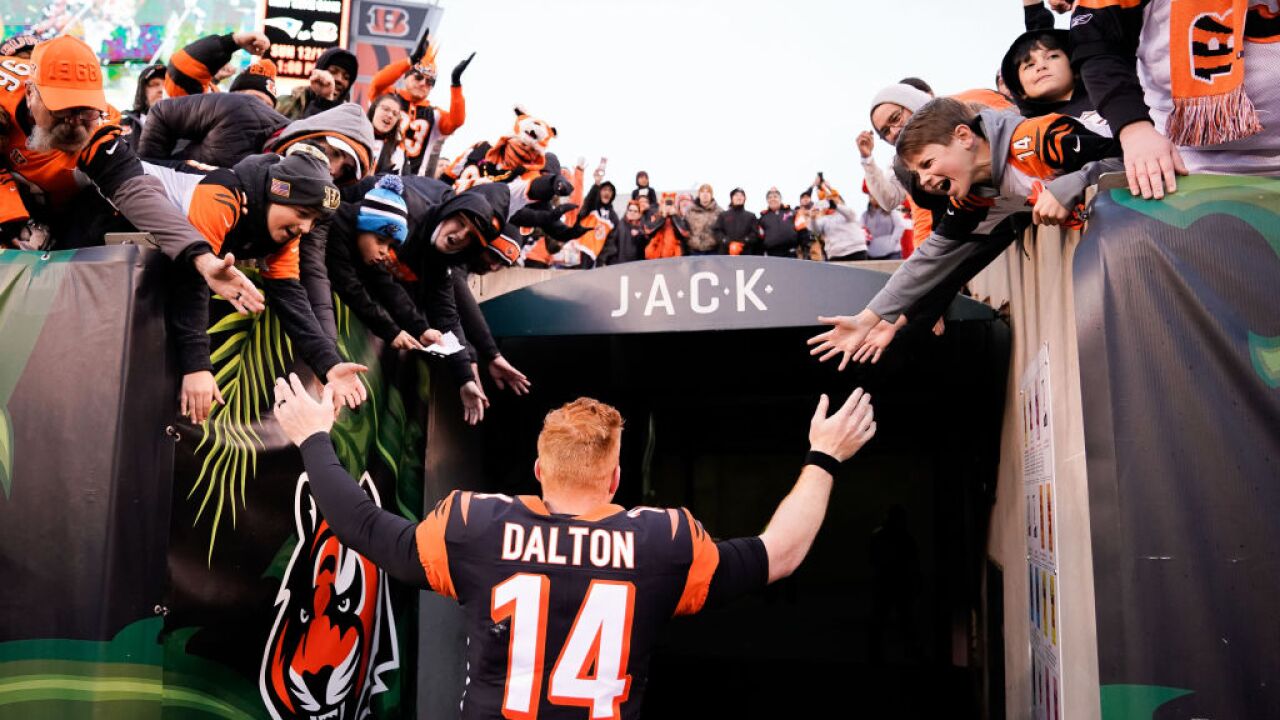 CINCINNATI – Andy Dalton is getting the chance to end his Bengals career on his own terms. Whether it be to salvage a few wins down the stretch, or further cement his place in the franchise record books, or show what’s left in his tank for a new employer, Dalton has been given a new lease on life in the NFL.

On Sunday, three weeks after being benched, Dalton led the Bengals to a 22-6 victory over the New York Jets, their first of the season after an 0-11 start. He was 22 of 37 passing for 243 yards and a touchdown. Dalton’s numbers would have looked even better had it not been for a couple of dropped TD passes.

“Proud of the adversity he’s faced, and how he handled that,” Bengals head coach Zac Taylor said. “Proud of the leader he has been. For him to come back and break these franchise records and get the reward of getting this win, he stands for everything you want as a player.”

Dalton did the job he was brought back off the bench to do: help the Bengals avoid an 0-16 season, bring an end to a 13-game losing streak dating to last season, and help give Taylor his first win as an NFL head coach after an excruciating 12-week wait.

“This one felt good,” Dalton said. “Knowing I was going to be starting, I wanted to attack every day and make sure everyone was confident that we were going to get this thing done. I thought we had one of the best weeks of practice we’ve had all year.”

Following the game, three months of frustration was released in the Bengals locker room in the form of boisterous cheers, music that shook the walls, and a resurrection of the traditional “Who Dey” victory chant heard frequently under former head coach Marvin Lewis. There also were a few tears.

“It’s emotional,” Taylor said. “You go through it with all these guys.”

In the first quarter, Dalton threw a missile into tight coverage to Tyler Boyd for a 17-yard touchdown, putting the Bengals ahead 7-3.

It was the 198th career touchdown pass for Dalton, moving him past Ken Anderson into sole possession of the franchise lead, in 83 fewer games. Dalton later set the franchise record for completions with 2,669.

“This week, we were really connecting,” Boyd said of Dalton. “You could see him all this week. He showed a lot of leadership. I’m glad I could be a part of the record.”

With a brisk wind whipping around Paul Brown Stadium on Sunday, it wasn’t ideal conditions for Dalton to throw the ball. But the veteran QB came out slinging, with completions on six of nine passes for 72 yards and a touchdown in the first quarter.

Dalton seemed in control of the offense throughout, against a Jets defense that ranked among the best in the league.

“We had a Wednesday practice that was windier than that,” said Taylor, of the 28 mph gusts on Sunday. “We thought we were ready for it. We learned what plays we could run and in which direction. When we were going toward the city, we really couldn’t throw the ball down field. We had to wait until we were heading toward the river.”

Direction seems to have been an issue for the Bengals in recent weeks.

The decision to bench Dalton made sense from a forward-thinking perspective, but bringing him back was a little contradictory. It’s also fair to ask why Dalton is still with the Bengals. Reportedly there was some interest in Dalton at the trade deadline, but the Bengals showed no willingness to make a deal.

Dalton, 32, has one season left on a six-year, $96 million dollar contract. It is not likely the Bengals will offer him an extension. Conventional wisdom is that the Bengals would select a quarterback in next year’s NFL Draft, most likely LSU’s Joe Burrow. Of course, the Bengals don’t always take the conventional route.

After the Bengals fell to 0-8 with a loss to the Los Angeles Rams in London, Dalton was benched in favor of rookie Ryan Finley. With eight games remaining, the idea was to give Finley a look to see what he could do.

Finley, a fourth-round pick out of North Carolina State, completed 41 of 87 of his passes (47.1%) for 474 yards and two touchdowns with two interceptions and three lost fumbles in his three games.

Taylor insisted that three games was not enough time to evaluate a young QB, but the urgency of getting a win apparently took precedent. Enter: Dalton.

“He’s my guy, no matter what happens,” said Bengals receiver A.J. Green, who remains out with an ankle injury. “It’s bigger than football with Andy and I. For him to go out there after getting benched, then to break all those records, is unbelievable.”

At the time of his benching, Dalton had passed for 2,252 yards with nine touchdowns and eight interceptions, including three in the fourth quarter against Jacksonville the week before he lost his starting role. Dalton was able to shed any bitterness and serve as a mentor for Finley until another opportunity presented itself.

“Zac and I had a ton of conversations,” Dalton said. “He’s stayed steady this whole time. He’s a big reason why everybody has stuck together. The way we played today shows that no one has given up. A lot of teams in our position could do that.”

Inserting Dalton back into the offense carried less risk for the Bengals’ draft position with them holding a two-game lead going into Sunday. Wins by the Redskins and the Dolphins on Sunday helped the Bengals’ position, although a loss by the Giants moved them to within one game of the top spot.

The veteran Bengals players say they’re just focused on getting a win. “This is a big burden off our shoulders,” said defensive end Carlos Dunlap.

Taylor said his wife planned to pick out a good bottle of wine for a family dinner they had planned for Sunday night. But he wasn’t about to help make a choice prior to the game.

“You try not to jinx it,” Taylor said, smiling. “We’ll see what she’s got for us. The pressure is off us a little bit, and the guys felt that. It speaks to the character of these guys to stick through it. It’s really easy to point fingers, and we didn’t see that.”