Can the Bengals find a play-maker of their own at quarterback? 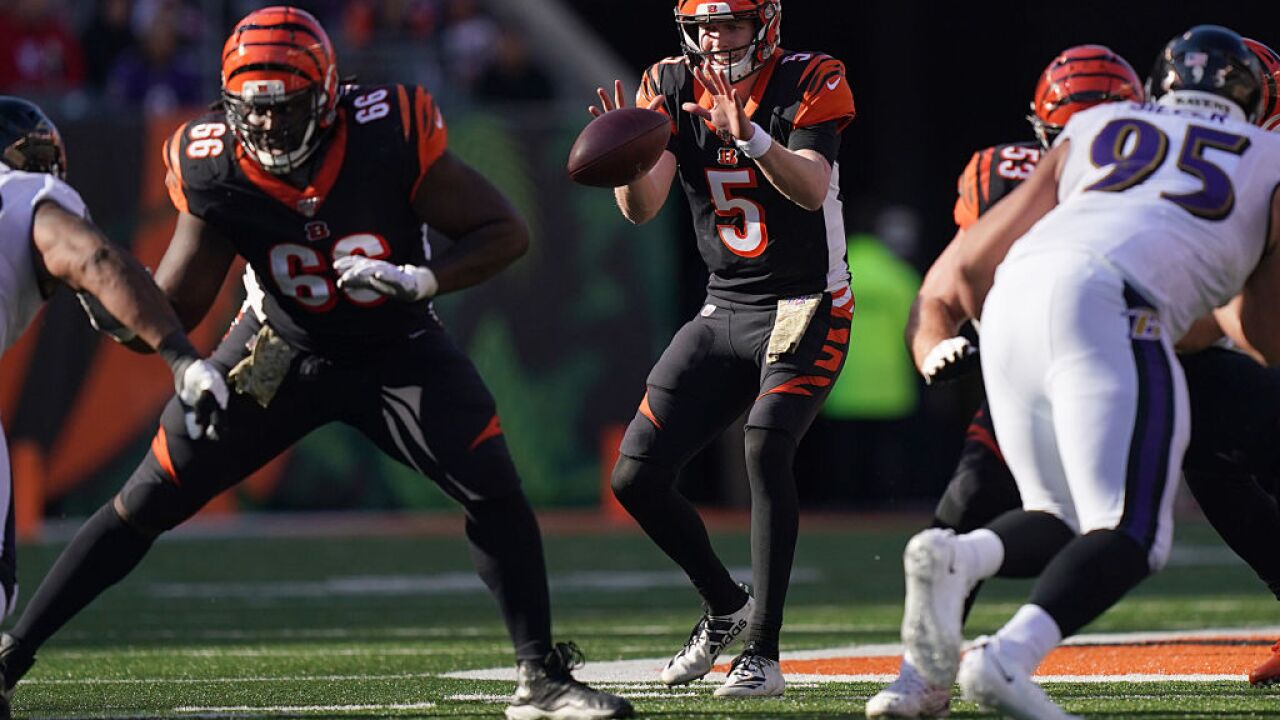 CINCINNATI – Now that they have officially moved on from Andy Dalton, the Bengals are searching for their next franchise quarterback. On Sunday, the Baltimore Ravens showed how rewarding, and precarious, that venture can be.

On the same day Bengals’ fourth-round draft pick Ryan Finley made his first NFL start, Ravens quarterback Lamar Jackson, a first-round selection in the 2018 Draft, had the best individual performance in Paul Brown Stadium’s history in a 49-13 Ravens’ win that dropped the Bengals to 0-9.

Jackson rushed for 65 yards including a 47-yard TD run during which he eluded Bengals tacklers with a video-game like spin move, and completed 15 of 17 passes for 223 yards and three TDs. His passer rating was a perfect 158.3. One of his two incompletions was a spike to stop the clock.

“He’s a special player,” said Bengals head coach Zac Taylor. “Hats off to them. They’ve got something really special there.”

Jackson was the 32nd and final pick in the 2018 Draft. There were 31 teams that passed on the dynamic Jackson who starred in college at the University of Louisville, including the Bengals who picked center Billy Price from Ohio State 11 picks earlier.

There were plenty of people who doubted that Jackson could succeed in the NFL and so far, with a system in Baltimore well-designed to suit his skills, he has proved them wrong.

“I think (Ravens offensive coordinator) Greg Roman does a great job,” said Taylor. “Greg has a history of being at the 49ers and the Bills and running that similar style of offense and get the most out of his guys.”

The visiting fans in Paul Brown Stadium began chanting “M-V-P” at several moments during the game. “He has my vote,” said Bengals safety Shawn Williams.

If it was the Lamar Jackson Show at Paul Brown Stadium, Finley was the undercard.

Finley’s first career appearance was an important first step to determine what they have in him before setting their sights on next year’s NFL Draft when they likely will have one of the top two picks.

Finley’s first game went about how you would expect against a physical Baltimore defense.

The good: When he escaped the rush of Ravens defensive end Zach Sieler and threw across the field to Joe Mixon for a 23-yard gain. Mixon was the only bright spot for the Bengals on Sunday, rushing for a season-high 114 yards. Just before halftime, Finley tossed a six-yard TD pass to Tyler Eifert for his first career touchdown.

The bad: Finley completed 16 of 30 passes with a couple overthrows and two sacks, including one Finley fumble that was returned 33 yards for a touchdown.

And, the ugly: When his poorly thrown pass intended for Alex Erickson was intercepted by Marcus Peters who anticipated the route and raced 89 yards down the sideline for a touchdown.

“It was a bad throw, but I can’t take away the fact that he jumped it,” Finley said. “But, on my end, that’s just a bad throw. It’s got to be outside and it has to fly out of bounds.”

Of course, one might say Finley was behind the eight ball before the game started, playing without the services of A.J. Green who remains out with an ankle injury, and behind a patchwork offensive line in an offense that ranks 25th in the league and last in red zone efficiency.

“I just have to get ready to play,” Finley said. “I thought the guys we had in there today did an awesome job. We’re going to get this thing going.”

Over the final seven weeks, the Bengals are going to get a good look at what they have in Finley and decide how to move forward with the quarterback position.

With the likelihood that they’ll have one of the top two picks in next year’s Draft, the Bengals are the odds-on favorites to get Alabama’s Tua Tagovailoa or LSU’s Joe Burrow, who’s an Ohio native and former Ohio State Buckeye.

Finley, a fourth-round pick out of North Carolina State, raised a few eyebrows during the preseason when he completed 73% of his passes for 414 yards and three touchdowns with an interception and a robust 99.3 passer rating.

Finley’s first two passes on Sunday weren’t pretty. He underthrew Eifert in the flat then overthrew a deep ball to Auden Tate.

By the time Finley trotted out for his second possession, the Bengals already were trailing 14-0 in the first quarter. He settled in on the second drive which resulted in a field goal, with three pass completions and a 16-yard scramble.

“He held his ground and came in confident,” said Bengals receiver Tyler Boyd. “He controlled the offense and we were moving the ball quickly. The turnovers probably are going through his head, but at the end of the day he played great.”

Dalton was an observer and consultant during Sunday’s game, just as he had been throughout the bye week, helping Finley learn the Ravens defense and prepare for his first NFL game.

“We’ve watched quite a bit of film together, Finley said. “He’s played the Ravens for a long time, so he had some insight. He’s steady for me mentally. I feel a lot better after I talk to Andy.”

If the Dalton Era is indeed over in Cincinnati, it’s important to note what he has meant to the Bengals organization and what he accomplished during his nine seasons.

Dalton tossed a franchise-best 197 TD passes, tying him with Bengals legend Ken Anderson. Dalton has compiled a 68-58-2 record as a starter, also a franchise best. He is the Bengals’ all-time leader in passer rating (88.0) and 300-yard passing games (27) and ranks second in passing yards (30,352) and completion percentage (62%).

The Bengals are looking for the next Dalton, but one that can, not just get them to the playoffs on a regular basis, but advance, something they haven’t done since the 1991 season.

There is some precedent for the Bengals rebuilding behind the quarterback position.

The Bengals drafted Dalton with the 35th overall pick in 2011 after Carson Palmer demand to be traded. Palmer, the 2002 Heisman Trophy winner was selected first overall by the Bengals in 2003 and spent his rookie season learning under veteran Jon Kitna.

The Bengals can only be spectators for Jackson’s jaw-dropping plays, and shopping for a play-maker of their own. For now, it’s Ryan Finley.

“I like his focus, he was as prepared as you could ask a young quarterback to be,” Taylor said. “He did some good things against a really good defense in his first game and we just have to continue to build off that.”