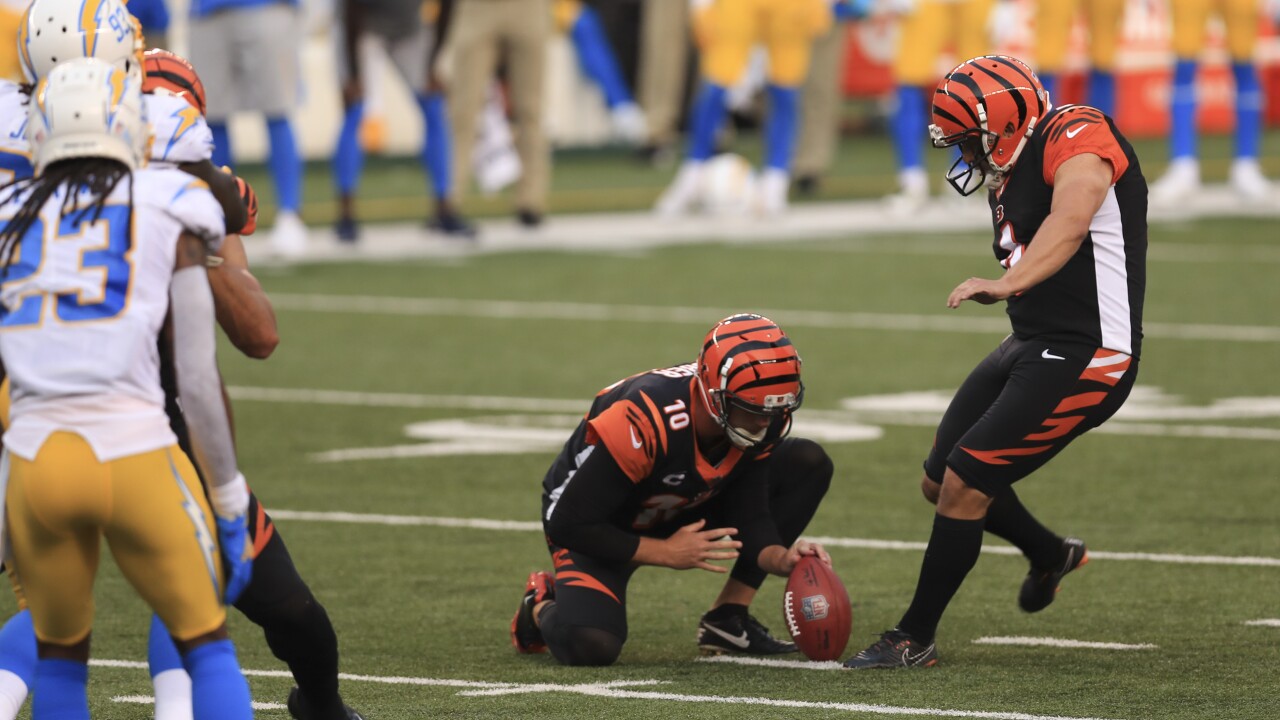 CINCINNATI – Before the brutal ending to Sunday's game, Joe Burrow’s NFL debut had all the makings of a storybook finish. But this isn’t a story that will be written after one game.

Throughout the 16-13 loss to the Chargers, the Bengals’ rookie quarterback had the kind of up-and-down performance you’d expect from his first career start.

But with 3:08 remaining in the game, no timeouts left, and the Bengals trailing by three points, Burrow took the ball at his own 18-yard line and then took charge.

With no preseason games, Burrow and the offense showed some rust on Sunday and the timing and rhythm took some time to come together. But with the game on the line, Burrow’s teammates said he had full command of the huddle.

“I saw a lot in Joe leading that last drive,” said Bengals wide receiver A.J. Green. “He didn’t play like a rookie. That guy doesn’t flinch. I liked the way he handled himself on that last drive.”

Burrow completed six of nine passes for 71 yards on the drive. And when he found Green in the corner of the end zone for an apparent winning touchdown, it appeared Burrow had added another chapter to his growing legend.

But as has been the case for the Bengals franchise in recent years, always expect the unexpected. So, when the officials ruled that Green had pushed off before making the catch resulting in a pass interference penalty, and then the ensuing field goal attempt sailed wide right after kicker Randy Bullock had a cramp during his kicking motion, it was just another inexplicable late-game disaster at Paul Brown Stadium.

Only this is different.

If Bengals fans are looking forward to a bright future with Burrow, there was no reason not to be encouraged after Sunday. Burrow completed 23 of 36 passes for 193 yards. He rushed for 46 yards and a touchdown. And while he had an ill-advised shovel pass intercepted in the fourth quarter and a couple of glaring overthrows to John Ross and Green earlier, Burrow had himself in position to win the game.

“We were very comfortable with Joe,” said Bengals left tackle Jonah Williams. “We wanted to eat up the clock, get down there and win the game. I’m proud of the last drive. If we continue to play like that, we’ll win a lot of games. Joe’s a good leader. He’s gracious. He knows he can do better. The whole team can do better.”

Perhaps the most impressive part of Burrow’s debut came after the game. He took ownership of his mistakes. He took responsibility for what he contributed to the loss. When asked to grade his performance, Burrow gave himself a “D”.

“At the end of the day, I made too many mistakes to win the game,” Burrow said. “I missed A.J. (Green) on a deep ball. I missed John (Ross) on a deep ball. I had the interception. I can’t miss that one to A.J. A high schooler can make that throw. Tough way to lose.”

Burrow wasn’t interested in discussing moral victories or patting himself on the back for the things he did well on Sunday. But his Bengals teammates lauded Burrow’s leadership.

“Some good, some things we have to improve on,” said Bengals head coach Zac Taylor of Burrow’s performance. “He kept his composure. He moved on to the next snap. He made some big plays for us down the stretch. The first half he was running for his life.”

That, of course, will need to change if Burrow is to be successful this season. As expected, the Chargers’ pass rush, led by Burrow’s former Ohio State teammate Joey Bosa, sacked him three times and hurried him often. They had three hurries and a sack in Burrow’s first eight drop backs. But the offensive line performed much better in the second half.

“Our O-line really stepped up,” Burrow said. “They gave me some time back there. I was happy the way they stepped up. We got them on their heels a little bit. We started moving the ball a little bit. I thought we played well enough on that particular drive to put it in the end zone.”

The Bengals defense picked up Burrow by stopping the Chargers on fourth down twice and again after LA had first-and-goal at the 2.

And, it helped Burrow to have the veteran Green back on the field. On the Bengals’ second possession, Burrow found Green on a slant for an 11-yard gain. It was Green’s first catch since week 13 of the 2018 season. He had five catches for 51 yards on nine targets. He could have had 10 more yards and a game-winning TD, but the officials thought otherwise.

“If we can call that, you can call it both ways,” Green said of the OPI call with 12 seconds left. “He’s clamping me in five yards. I couldn’t do anything else. I feel great. Just happy to be back. Don’t take anything for granted. It’s fun to be back. I feel like I haven’t lost a step.”

Burrow’s first career touchdown came on the ground when, on third-and-two, he checked to a quarterback draw then off a block from center Trey Hopkins freed himself for a 23-yard TD to put the Bengals ahead 7-0 in the first quarter.

NFL quarterbacks selected No. 1 overall are now 4-19-1 in their first career starts. But all things considered, Burrow did enough to post that fifth win on Sunday.

“No rookie can handle that kind of adversity,” Green said. “We have a special one in Joe.”