Bengals’ Taylor hints at changes. Could one be quarterback? 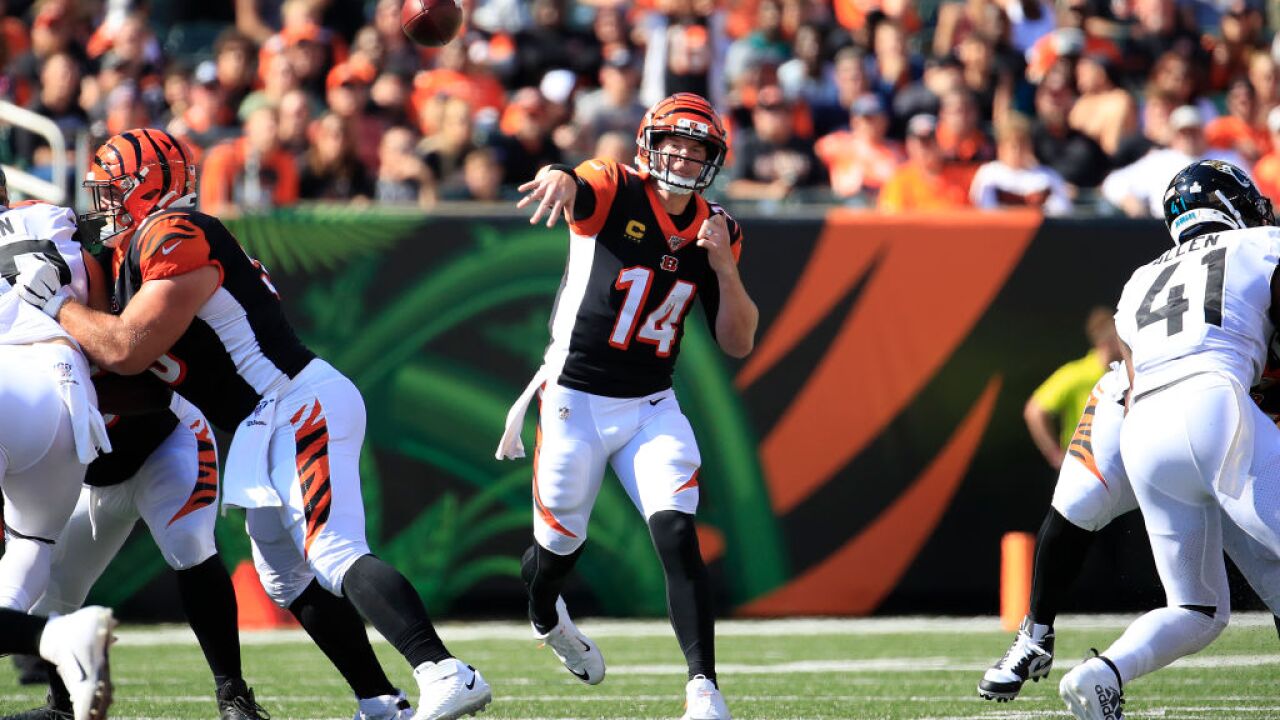 CINCINNATI – Bengals head coach Zac Taylor said everything is on the table with his team now 0-7 for the first time since 2008.

With the season approaching the halfway point, there aren’t many impactful changes that can be made to the lineup or roster. But there is one: Quarterback.

Andy Dalton had a miserable afternoon in Sunday’s 27-17 loss to the Jaguars, with three interceptions, all in the fourth quarter. Dalton threw picks on consecutive pass attempts and one was returned for a touchdown. He completed 51% of his passes.

Following the game, Taylor was asked about the possibility of replacing Dalton with rookie Ryan Finley.

“That’s not something I’m going to talk about right now,” Taylor said. “I know when the quarterback has a tough game, that’s the first question. You want to point the finger at the quarterback. We do have to look at everything. But we all have to be accountable. What we put out on the field is not good enough.”

Making a change with Dalton isn’t all about his performance. Some of the reasoning for such a move is the team’s present situation. At 0-7, Taylor’s first season as an NFL head coach is a wash. With no playoffs on the horizon and a myriad of changes that will need to be made next offseason, it’s time to look to the future.

Dalton has one year remaining on a six-year $96 million contract. The Bengals drafted Finley in the fourth round out of North Carolina State. He performed well enough in the preseason to earn the No. 2 QB spot. The Bengals and the Dolphins are both winless through seven games and now battling for the coveted No. 1 overall choice in the 2020 Draft.

With nine games remaining, the Bengals have a chance to get a good enough look at Finley to determine if he’s anything more than a solid backup, or if they need to pursue their quarterback of the future in the 2020 draft which is loaded with QB talent.

Dalton, 31, has passed for 1,923 yards this season with eight touchdowns and eight INTs. He has completed 60.1% of his passes with an overall rating of 77.9. Of course, when evaluating Dalton’s performance, it’s important to note what he has to work with: No A.J. Green, no rushing attack, a patchwork offensive line.

Dalton has averaged 41 pass attempts through seven games. He’s been sacked 24 times. On Sunday the Bengals had 11 yards and one first down on 10 plays in the first quarter. They rushed for 33 net yards. Dalton had all but two of them.

Going into Sunday’s game, the Bengals’ rushing attack ranked last in the league with 56.5 yards per game.

“We don’t want to play the game dropping back 41 times,” said Taylor. “(Dalton) He’s done a good job keeping us afloat. It has not been easy. We’ve rushed for what we’ve rushed for. So, you have a quarterback who is going to stand back there knowing he’s going to face a fierce pass rush. Proud of him.”

The pick-six Dalton threw in the fourth quarter on Sunday had bad optics. Under duress, he appeared to throw the ball directly to Jaguars defensive end Yannick Ngakoue who returned it 23 yards for a touchdown.

In truth, it was a screen pass thrown to no one because Gio Bernard got held up at the line of scrimmage. And in Dalton’s defense, Ngakoue said he saw it coming.

Cue up the face-palm emoji.

Dalton was asked if after his third interception on Sunday, he was looking over his shoulder thinking Taylor might make the move to Finley.

“I didn’t think about that,” Dalton said. “We just have to keep playing and trust that our guys are going to make a play. It’s been very tough to be in the position we are now. To not have won a game at this point … the standard’s higher than that.”

Not surprisingly, there was plenty of support offered up for Dalton in the Bengals’ locker room following Sunday’s loss.

“This is a team game,” said Bengals receiver Alex Erickson, who had a career-high eight receptions for 137 yards. “Andy and I have a close relationship. Just seeing how he goes about his business, it’s not on him. It’s a team game. But that’s the way the NFL is right now. They always look at the quarterback.”

Aside from Erickson, Dalton’s receivers did him no favors on Sunday. Tyler Boyd had a couple of key drops and finished with five catches on 14 targets.

“There were six or seven drops,” added Taylor. “They weren’t all perfect ball position, but we have to step up and make some plays, too. The turnovers hurt us. Everyone has to step up.”

The Bengals led going into the fourth quarter for the first time since week one at Seattle, but it was a short-lived advantage.

“When you’re one-dimensional, it makes it easy for the other side to know what’s going on,” Dalton said. “But negative plays hurt us. You can’t turn the ball over, I know that.”

Sunday’s loss came after a tumultuous week with the Cordy Glenn saga dominating the headlines. The Bengals’ offensive lineman who spent nearly two months in concussion protocol following a head injury in the preseason, reportedly got into an altercation with a team official on Wednesday over the team’s handling of his concussion diagnosis and treatment.

The timing for a quarterback change isn’t ideal, with the team preparing for next week’s trip to London to face the Rams, but then a bye week follows. Some might say inserting Finley now would be like throwing him to the wolves.

At this point, every card should be on the table.