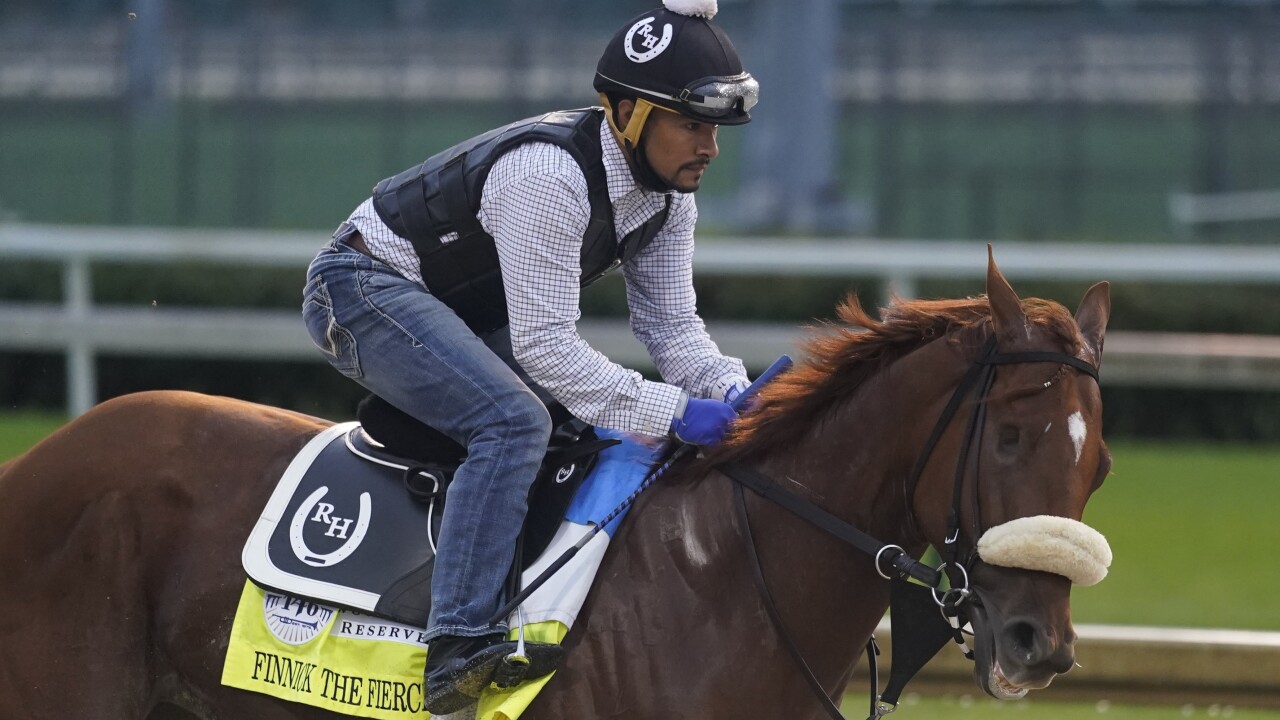 (Copyright 2020 The Associated Press. All rights reserved. This material may not be published, broadcast, rewritten or redistributed.)
Darron Cummings/AP
Kentucky Derby entry Finnick the Fierce runs during a workout at Churchill Downs, Wednesday, Sept. 2, 2020, in Louisville, Ky. The 146th running of the Kentucky Derby is scheduled for Saturday, Sept. 5th. (AP Photo/Darron Cummings)

LOUISVILLE, Ky. (AP) — The field for the Kentucky Derby has been reduced to 16 after Finnick the Fierce was scratched on Friday.

The one-eyed gelding may have an issue with his foot. He’s missing his right eye because of a congenital cataract.

The Derby on Saturday will have its fewest starters since 2003, when Funny Cide beat 15 rivals. King Guillermo, owned by former major league All-Star Victor Martinez, was scratched because of a fever.

Finnick the Fierce drew the No. 1 post position and was listed at 50-1 on the morning line. His absence means Max Player will break from the inside position. The field will be loaded into posts 2 through 17, with posts 1, 18, 19 and 20 left vacant in the new starting gate, according to Churchill Downs stewards.

“Because he’s blind on the right eye, he carries himself a little funny and we always knew that,” owner Arnaldo Monge said. “But ever since he arrived, the vets have been keeping an eye on the horse.”

Monge said trainer Rey Hernandez, who gets aboard Finnick the Fierce for morning workouts, told him he didn’t notice any problem. But Monge said they chose to err on the side of caution and scratch the chestnut gelding.

“I know horse racing is under scrutiny all the time so I understand not trying to risk that publicity,” he said.

The gelding will undergo further testing. Monge said if he checks out, Finnick the Fierce could be in consideration for the Preakness on Oct. 3.

Finnick the Fierce finished seventh in the Blue Grass Stakes in July, his most recent start.