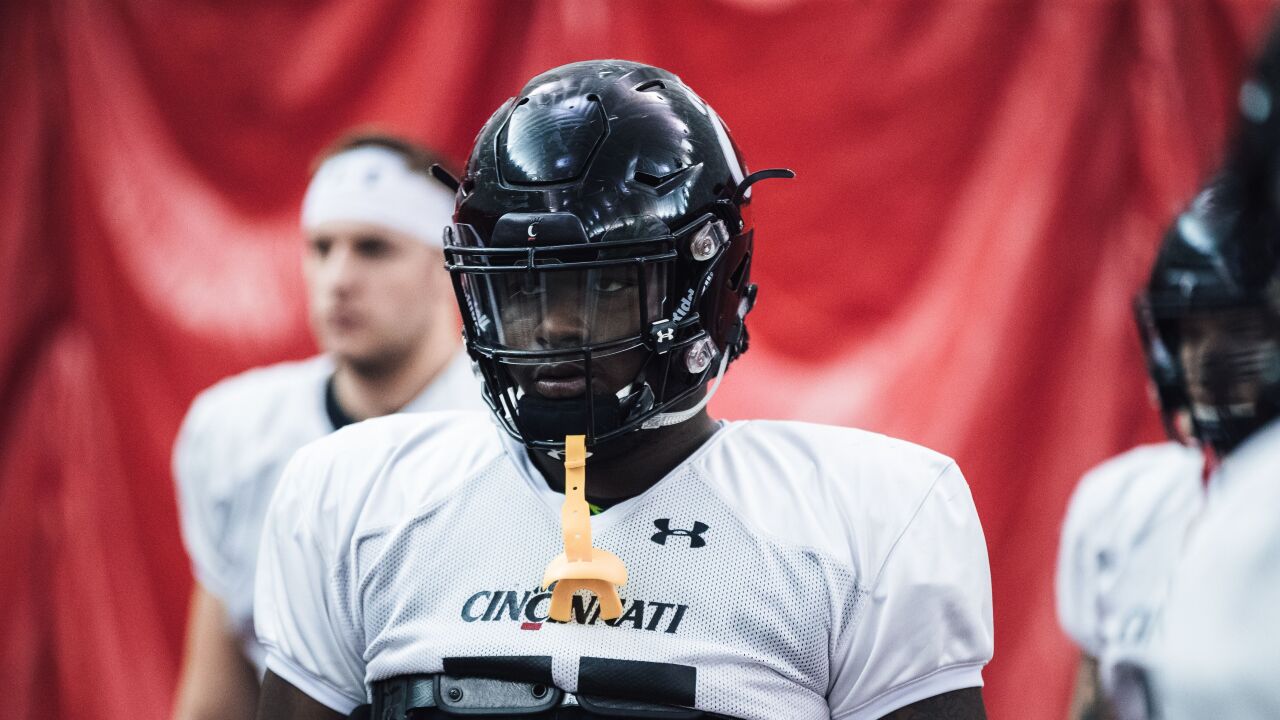 Provided by UC Athletics
UC offensive lineman James Hudson asked for support on Twitter Tuesday after his waiver to become immediately eligible was denied by the NCAA after he transferred from Michigan.

CINCINNATI — The University of Cincinnati Department of Athletics is taking the next step this week in order to assist offensive lineman James Hudson who was denied his immediate-eligibility waiver by the NCAA after transferring from Michigan.

Hudson, a UC redshirt freshman and Toledo native, issued a statement on Twitter late Tuesday morning saying his immediate-eligibility waiver was denied by the NCAA because he didn’t speak up about his mental struggles to the Michigan administration in 2018.

"The University of Cincinnati Department of Athletics is in the process of submitting a reconsideration of James Hudson's immediate-eligibility waiver. James provided the university with some additional information which will be forwarded to the committee. Out of respect for the ongoing process with the NCAA, we aren't going to comment beyond that at this time."

Hudson played in three games for the Wolverines in 2018. Hudson was the Bearcats’ first team left tackle this spring.

UC filed a waiver for Hudson to be eligible immediately but that was denied by the NCAA.

By mid-afternoon Wednesday, Hudson's tweet had an estimated 1,300 retweets and 3,700 likes.

“Like many football players I was afraid to speak up about my depression not wanting to look weak,” Hudson tweeted. “Now the NCAA is telling me that my courage to step forward and speak about my issues was done too late and subjectively my, ‘Circumstances do not warrant relief.’”

Multiple UC assistant coaches and players have tweeted their support for Hudson and the word spread to national media outlets.

NCAA spokesman Chris Radford told WCPO by email Tuesday afternoon he was looking into the issue but had not replied further to WCPO by noon Wednesday.

“Don’t know all the details here James but wish you luck in gaining your eligibility at UC and applaud you for having the courage to step up and talk about what you’re dealing with away from the field,” ESPN college football analyst Kirk Herbstreit tweeted.

Don’t know all the details here James but wish you luck in gaining your eligibility at UC and applaud your for having the courage to step up and talk about what you’re dealing with away from the field. https://t.co/BJKN5WHZOV

ESPN college basketball analyst Jay Bilas also chimed in and wondered what purpose is served for Hudson to sit out after he left Ann Arbor.

Hudson, a 2017 Toledo Central Catholic graduate, was a four-star recruit in high school. He was a high school teammate of UC junior running back Michael Warren II.