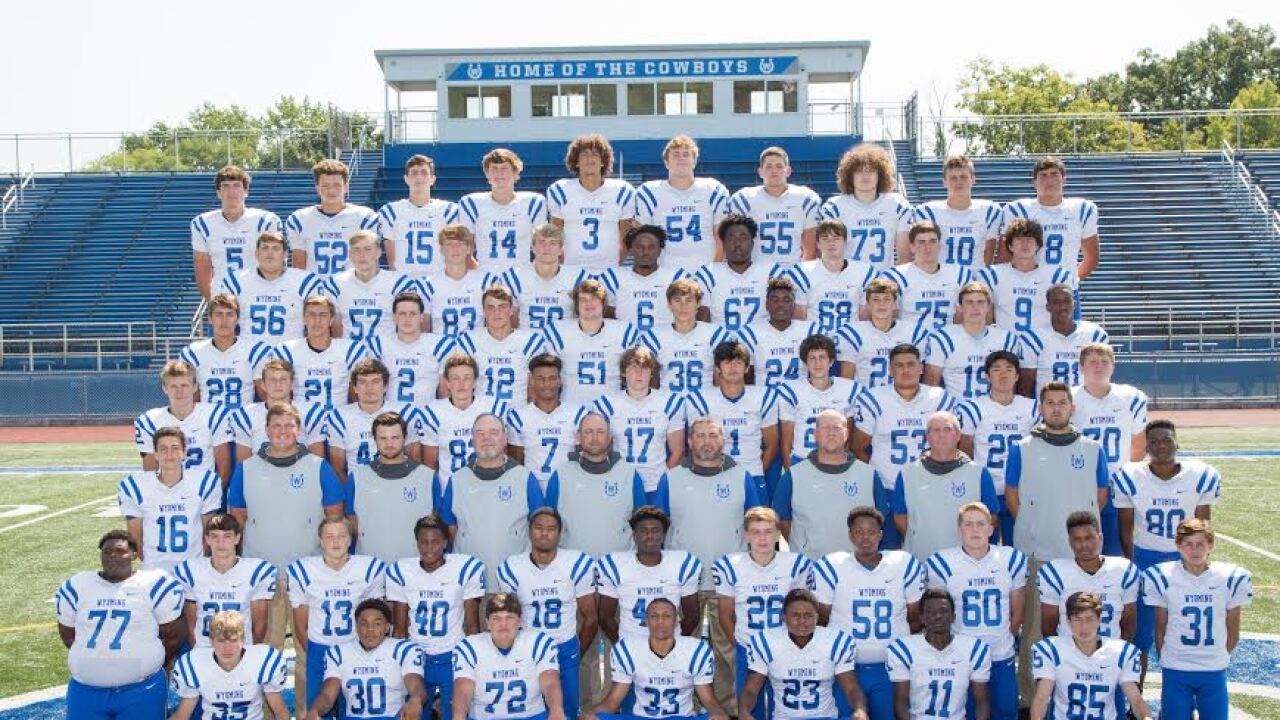 CINCINNATI — The Wyoming football team picked up right where it left off in the state championship game last December in Canton.

“Some of the plays he made tonight were incredible,” Wyoming coach Aaron Hancock told WCPO on the bus ride home late Friday night. “I wish I could send you some video. He did a tremendous job of keeping plays alive.”

Prater, rated the state’s No. 2 player overall in the 2020 class by 247 Sports, was wrapped up by Columbus Academy defenders at his legs on one particular play but managed to throw a 20-yard touchdown pass.

“He did a tremendous job,” Hancock said. “I am being very honest — I can’t think of a better football player in the state of Ohio right now.”

The Cowboys, which have won 16 consecutive games dating back to the 2018 season, took a 7-0 lead early in the first quarter when Prater found junior Joop Mitchell for an 80-yard pass connection. Mitchell had four receptions for 154 yards and two touchdowns.

Wyoming (1-0), which has a 32-game regular-season winning streak — the longest active streak in Ohio — led 21-7 at halftime. Senior running back Elijah McGee had 164 yards rushing.

The defense was led by several players including senior linebacker Camden O’Gara. Senior Wil Schuehler had an interception.

Prater and the Wyoming seniors are 40-3 as a class the past three seasons.

Panthers pounce: Elder had 468 yards of offense as the Panthers defeated Gahanna Lincoln 41-6, just a short drive from where Wyoming played Columbus Academy. Senior quarterback Matthew Luebbe threw for 111 yards and rushed seven times for 241 yards and two touchdowns for the Panthers (1-0). Senior linebacker Colton Sandhas had a team-high nine tackles and had an "outstanding game," according to Elder coach Doug Ramsey. Elder plays host to Indianapolis Cathedral Sept. 6.

"On offense I was very pleased," Elder coach Doug Ramsey said. "The starters scored on all six possessions they were in. The offensive line was good."

“I was really pleased with our effort and our attitude,” Cutright said. “I thought our kids played hard.”

Colerain (1-0) had to drive nearly two hours after getting caught in traffic a few times. Cutright said it was a good test of character especially with the graduation losses offensively from a year ago.

“Last week it was a humbling experience,” Cutright said of the scrimmage at Lakota West. “We didn’t play all that well. It was good for us (Friday night). It was a good learning experience.”

Cutright was very pleased with the support from the Cardinals’ fans, too. That certainly helped the Cardinals on the road against a quality opponent.

A TD to remember: Princeton senior defensive end/tight end Darrion Henry (Ohio State) scored on a 1-yard touchdown run late in the second quarter in the Vikings' 38-7 win over host Milford. It was probably Henry's first offensive touchdown since the sixth grade, according to Princeton coach Mike Daniels. Henry scored on defense his sophomore season.

Winton Woods wins big: Winton Woods defeated host Trotwood Madison 36-7 Friday night. Winton Woods senior running back Miyan Williams (Iowa State) – the 2018 Ohio Mr. Football runner-up – had 132 yards on 14 carries and a touchdown.
“I felt like they played hard and played physical with passion,” Winton Woods coach Andre Parker said. “Defensively, we are ahead of the offense but the effort was there. We left 28 points on the board easily tonight. It was a good first win.”
Winton Woods (1-0) plays at West Clermont (0-1) Sept. 6.

Cox enjoys victory in Oxford: Talawanda coach Larry Cox won his debut with the Brave Friday night in a 41-7 victory over Preble Shawnee.
Talawanda had 407 yards of total offense.
Senior running back Terrell Wills had 18 carries for 143 yards and two touchdowns. Sophomore running back Deondre Bothast-Revalee had 15 carries for 129 yards and two touchdowns.
“It was fun,” Cox said early Saturday morning. “Our kids played so hard. They did everything they were supposed to do. The best part is it wasn’t our best game yet. There is still a lot of room for improvement.”
Cox, the former longtime Lakota West head coach, accepted the Talawanda position in December.
Talawanda (1-0) plays host to Badin (0-1) Sept. 6.

Milestone for Ross: Ross defeated Badin for the first time in school history, according to Ross athletic director Jake Richards. Ross won 20-19 in overtime.
"We’ve developed what I think both sides would consider a healthy rivalry at this point, playing each other in all sports in generally competitive contests," Richards said. "It was a great and historic victory for the Maroon and Gold last night, but hats off to Badin for digging in and fighting until the end."

MVP performance: Taft junior Gianni Rudolph had seven receptions for 221 yards and two touchdowns in the Senators’ 27-20 win over Northwest at Marx Stadium Wednesday night. It was the opening game in the state of Ohio as part of the 22nd annual Skyline Chili Crosstown Showdown. Rudolph won MVP honors for his performance.
Rudolph had previously played defense but shined in the season opener as a receiver. Junior quarterback Robert Brazziel was also very impressive, according to Taft coach Jeff Cargile.
Rudolph stepped up for the Senators after last season’s leading receiver Tyran Davis tore his anterior cruciate ligament during the second scrimmage.
Taft (1-0) plays at Wyoming (1-0) Sept. 6. Cargile said a key will be to contain Wyoming quarterback Evan Prater’s running next week.

Houck helps: Fenwick senior outside linebacker Tyler Houck tore his anterior cruciate ligament in May and is expected to miss the entire Falcons’ season. But, that hasn’t stopped Houck from helping his teammates. The 2018 second-team all-Greater Catholic League Co-ed Central division selection aided his teammates during stretches this summer and acted almost like a coach, according to Fenwick head coach Dan Haverkamp.
“Ty prides himself in working harder than any of his peers,” Haverkamp told the school website. “He constantly is pushing himself to his limits in the weight room and on the field, even winning an award for hardest worker in practice. He was dealt with a devastating knee injury that ended his senior season before it began, yet he has embraced staying engaged with the team and being a leader despite not being able to suit up.”
Houck was scheduled to be the first to address the team before its game at Anna Friday night. Anna defeated Fenwick 48-14.

Extra points: The Sept. 6 game between St. Xavier at Colerain will be the 39th meeting between the storied programs since 1984. Next week is the first game of a home-and-home agreement that was renewed in March 2018. The 2020 game will be Week 2 at St. Xavier.