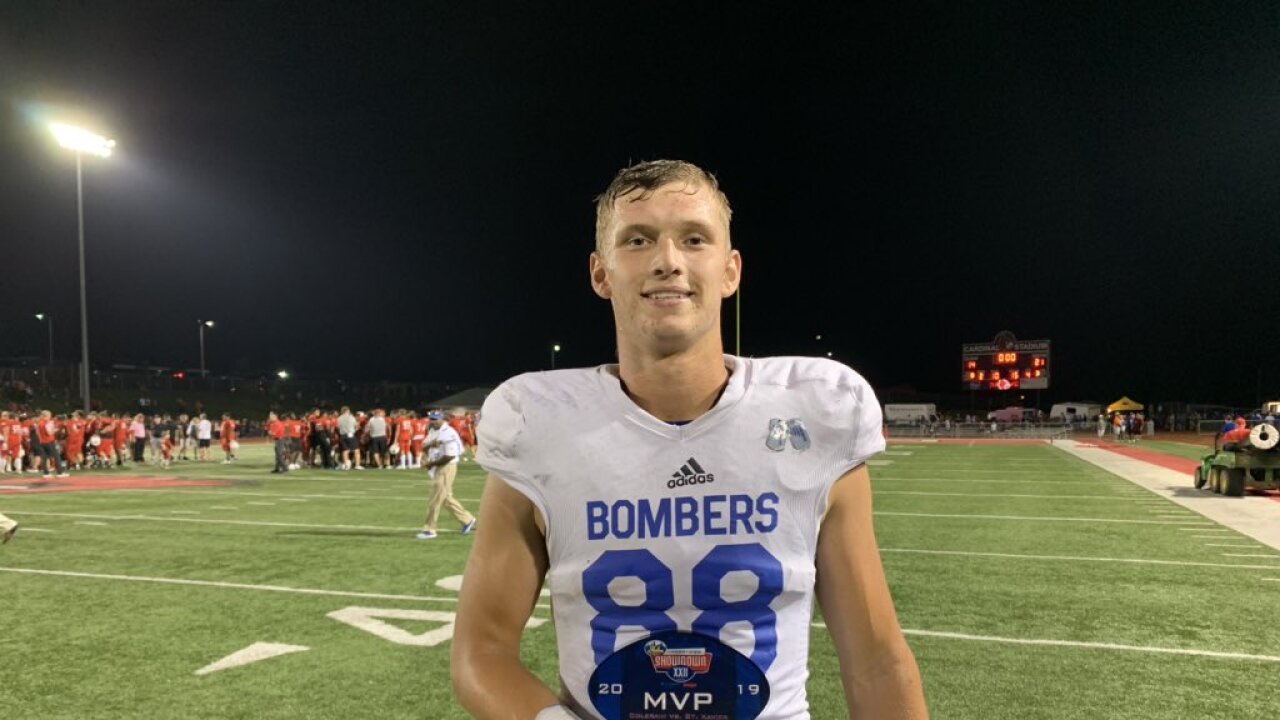 Although it’s premature to jump to any conclusions after Week 2, Colerain and St. Xavier realize the talent they have this early in the season. That could very well mean a postseason meeting in November.

Friday's result was decided by seven points or less for the 17th time since the series began in 1984.

St. X scored three times in the first half as the visiting Bombers defeated Colerain 21-14 in a highly-anticipated Week 2 matchup that was part of the 22nd annual Skyline Chili Crosstown Showdown.

“They’ve had our number for the past couple of years,” St. X coach Steve Specht said. “So it’s nice to get this win. But, again, it’s Week 2 — this isn’t a sprint. This is a marathon.”

St. X senior tight end Marshall Lang, a Northwestern verbal commit, earned MVP honors for his performance. He had eight receptions for 111 yards and scored all three of the Bombers’ touchdowns.

“There is a reason why he is committed to Northwestern,” Specht said. “He is a talented young man. Your talented kids have to rise to the occasion and that’s exactly what Marshall did today.”

St. X had 260 total yards including 234 in the air. Lang said Friday night was the first time he scored three touchdowns in a game since he started playing in second grade.

“Liam is an excellent player,” Lang said. “He is probably the most athletic person on our team. He’s unbelievable, but if they double him then they leave someone open, and it just happened to be me.”

The Bombers scored on the next play when senior quarterback Rueve found senior tight end Lang for an 11-yard touchdown pass connection to help give St. X a 7-0 lead.

Colerain scored on its opening drive after a 39-yard run from senior Hamzah Abdul Waheed and a 27-yard pass connection from junior Freddie Johnson to senior Jaylen Thomas.

Sophomore MJ Flowers took the handoff and went eight yards into the end zone to help tie the game at the 9:58 mark of the first quarter.

Hundley had a game-high 12 tackles. Senior linebacker Noah Taylor had 11 tackles and had six punts for 278 yards. He had two inside the 20-yard line including pinning the Cardinals inside their own 1 on the final drive in the fourth quarter.

Rueve found Lang for a 3-yard touchdown pass connection to help give the Bombers a 14-7 lead with 3:45 in the second quarter.

Lang scored his third touchdown of the first half when Rueve found him on a 12-yard pass connection down the right sideline to help give the Bombers a 21-7 lead with 1:05 left in the second quarter.

Colerain closed the gap to 21-14 with 3:32 left in the third quarter when senior Deshawn Pace returned a punt 82 yards for a touchdown.

Pace, a University of Cincinnati verbal commit, also had 10 tackles for the Cardinals.

Colerain coach Shawn Cutright said the special team as a whole wasn’t quite where he wanted it to be, especially giving up two touchdowns. Still, he was pleased with the Cardinals’ effort in the second half.

“You know that’s a great team,” Cutright said. “Steve’s guys came over here and we knew they were going to do their assignments and play hard.”

Friday was the first game of a home-and-home agreement that was renewed in March 2018. The 2020 game will be Week 2 at St. Xavier.