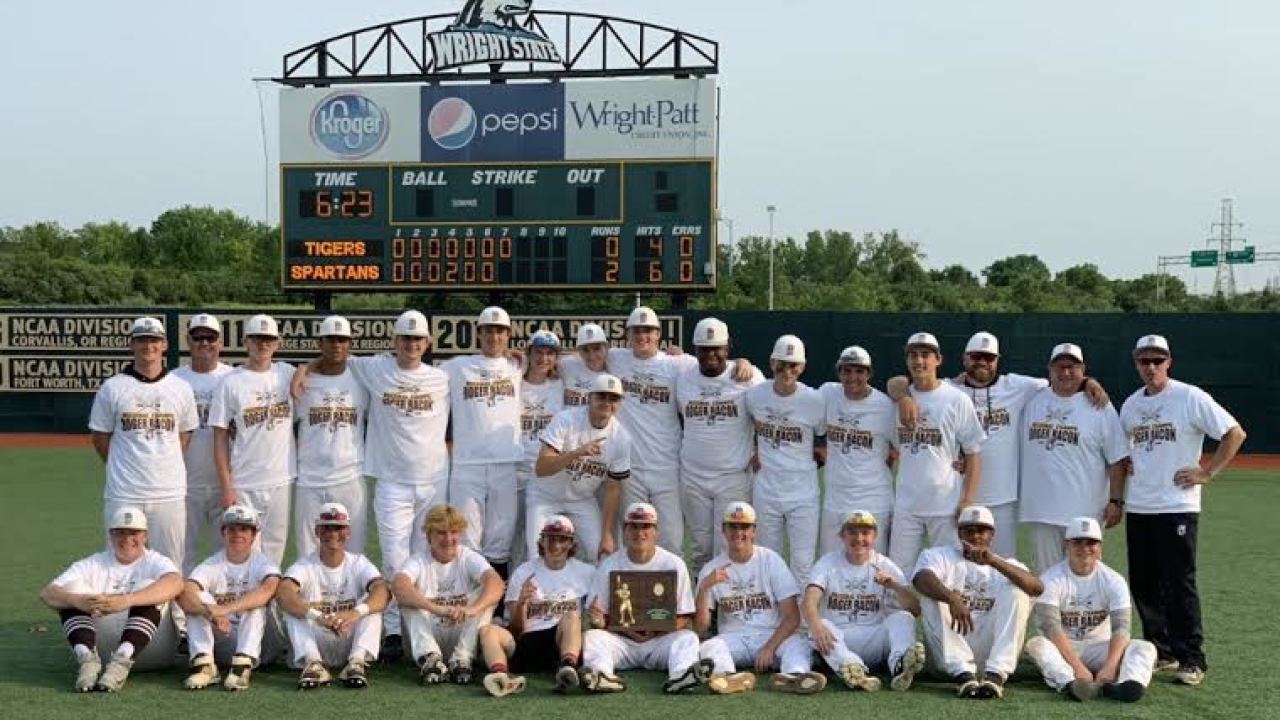 Provided
The Roger Bacon baseball team won&#39;t soon forget its journey to the state tournament this spring. The Spartans finished as a Division III state semifinalist.

As McCoy stood in the third base coaching box in the seventh inning at Canal Park, the promise of next spring was on his mind.

“I was thinking, ‘Man I am already itching to get back to school and start lifting weights,’” McCoy said.

Despite the loss, Roger Bacon won’t soon forget about its journey to their first state tournament since 1968.

“It was a close-knit group,” Polk said of this spring. “We were all like brothers.”

“It’s a tough loss to end the season,” McCoy said. “It’s tough to walk away knowing you didn’t play your best baseball. But at the same time I am proud as heck of these guys.”

Roger Bacon committed an uncharacteristic five errors in the game. Pitching and defense had been the Spartans' key to success in six consecutive wins prior to Saturday. Whether it was jitters or nerves, it wasn't meant to be Saturday.

Coldwater scored all 12 of its runs in the second and third innings.

“We made five errors,” Polk said. “We can’t do that. That’s not our baseball.”

Roger Bacon took a 1-0 lead in the top of the first inning after junior Evan Kelsey singled to right field, moved to second on senior Jake Speed’s sacrifice bunt and later scored on an error.

But, Coldwater scored five runs in the bottom of the second to give the Cavaliers a 5-1 lead.

Roger Bacon responded with five runs of its own in the top of the third on three consecutive RBI singles by Polk, junior Tyler Bullock and senior Chris McDaniel.

Coldwater responded yet again with seven runs in the bottom of the seventh to take a 12-6 lead. Roger Bacon added a run in the top of the fifth on Janzen’s RBI single to right.

The Spartans had runners at first and second with one out but a base-running mistake and a strikeout ended the rally.

Kelsey and Bullock each finished 1-for-3 with two runs scored. Janzen was 2-for-4 with three RBI.

Junior Dillon Fischer was another bright spot for the Spartans. He threw 3 2/3 innings and allowed just one unearned run and two hits on 44 pitches.

McCoy credited the three seniors – McDaniel, Polk and Speed – for helping to bring about the resurgence of Roger Bacon baseball. The Spartans can’t wait for another opportunity to return to Canal Park in 2020.

“Roger Bacon baseball is on the map,” McCoy said. “With our crew of guys coming back for next year I hope to be in the same spot with a little bit more experience behind us at this big stage.”

Canal Park will again be the host for the state baseball tournament in 2020. Canal Park is home to the RubberDucks, the minor league AA affiliate of the Cleveland Indians.

Huntington Park in Columbus had hosted the state tournament since it opened in 2009, but its home team, the Clippers, had a homestand this week.

This weekend was the latest start date for the state baseball tournament since at least 1965, according to the OHSAA. The tournament has been played on June 7 multiples times in the past but hasn’t started on that date since at least the oldest program available from 1965.