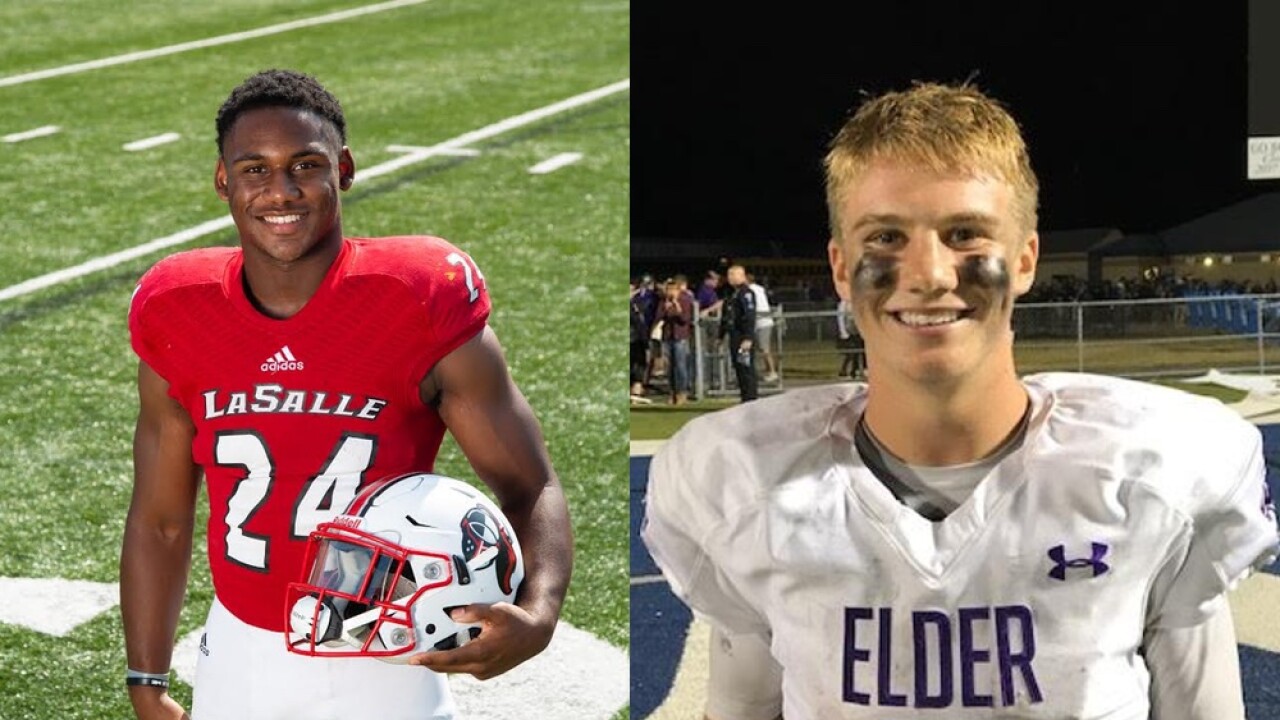 Luebbe and Porter were this week named the Greater Catholic League South division co-players of the year.

Luebbe has thrown for 2,064 yards and 18 touchdowns for the Panthers (8-2), who play host to Lakota West (7-3) in a Division I regional quarterfinal Friday night. Luebbe has also rushed for 1,099 yards and 11 touchdowns.

“He has taken his opportunity to be quarterback at Elder to become one of the best I have ever coached,” Elder coach Doug Ramsey said. “He is the ultimate competitor. I told the team (Monday) if everyone plays as hard as him and (senior safety) Colton Sandhas, we will be a hard team to beat. And his stats speak for themselves.”

Porter, who is verbally committed to Northwestern, has rushed for 565 yards and eight touchdowns and has 168 yards receiving and a touchdown for the Lancers (8-2).

“Cam is one of the best kids I have ever been around,” McLaughlin said. “His leadership (and that of the other 14 seniors) has been outstanding this season. We are not where we are without his leadership. I am very happy for him; he is very deserving of co-player of the year.”

McLaughlin was also named the GCL South coach of the year.

“With regards to coach of the year, it should be a staff/team of the year,” McLaughlin said. “I am surrounded by great people on this football staff as well as in my personal life and we have great kids on our team. I don't think we will really know what this means for 10, 15 or 20 years when these players come back and tell us that they are better men, or husbands or fathers because of the time they spent with us.”

La Salle junior defensive back Devonta Smith was named the all-purpose player of the year.

La Salle senior Luke Thiemann was named the GCL South linebacker of the year while Sandhas and Moeller senior Carrington Valentine (Kentucky) were named the co-defensive backs of the year. Sandhas has a league-leading 88 tackles, according to the GCL South site. He had 22 tackles against La Salle Nov. 1, Ramsey said.

CO-PLAYERS OF THE YEAR

COACH OF THE YEAR

ALL-PURPOSE PLAYER OF THE YEAR

CO-OFFENSIVE LINEMEN OF THE YEAR

DEFENSIVE LINEMAN OF THE YEAR

LINEBACKER OF THE YEAR

CO-DEFENSIVE BACKS OF THE YEAR