St. Xavier at Woodward basketball game is suspended due to a broken backboard 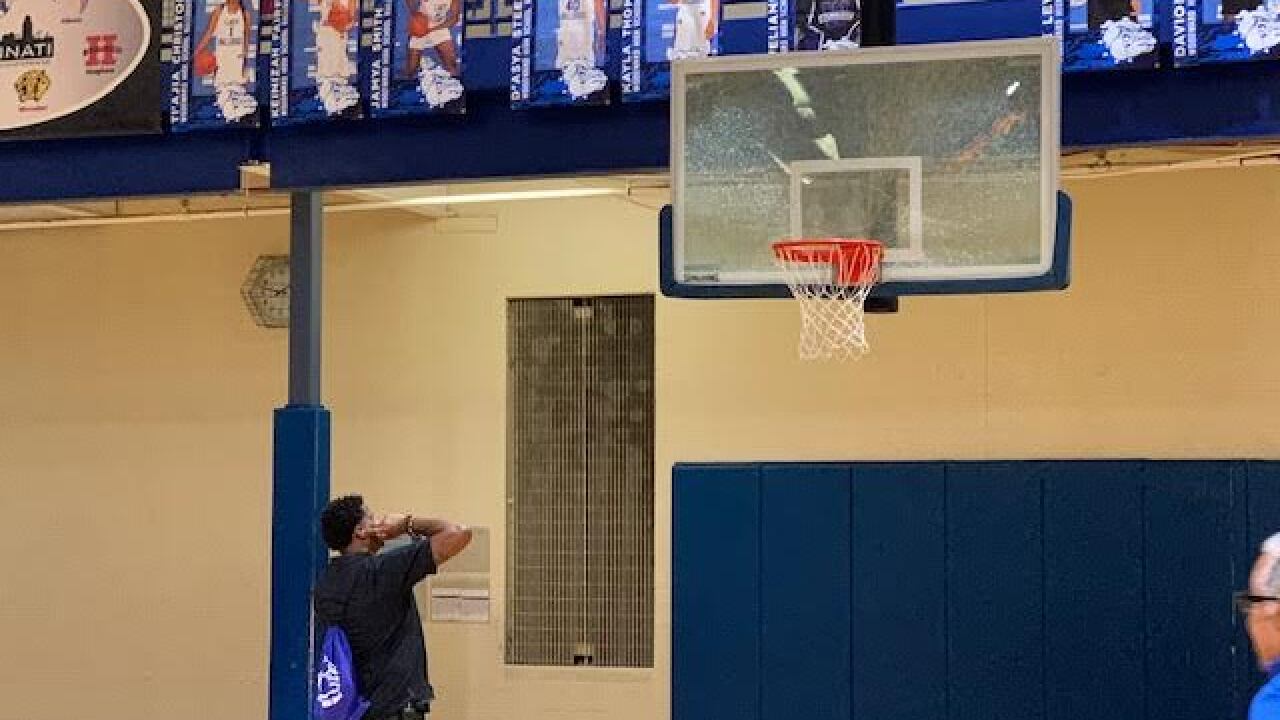 Provided/St. Xavier Athletics
The St. Xavier at Woodward basketball game is suspended due to a broken backboard after Woodward senior Davion Mace&#39;s dunk in overtime.

CINCINNATI — As soon as Davion Mace crashed the rim with a two-handed slam Tuesday night, Jabreel Moton heard a pop.

The backboard was broken.

Mace, the Woodward senior power forward, gave the Bulldogs a 62-60 lead over visiting St. Xavier during the first play of overtime.

Mace’s thunderous dunk off a missed layup with 3:54 remaining gave Woodward momentum to open the extra session after St. X junior guard Joe Kirby made a 3-pointer near the end of regulation.

“The whole gym just kind of exploded,” said Moton, Woodward’s athletic director. “There was a lot of excitement in the building. And then for me it was like, ‘Oh, crap.’”

“I said to the coaching staff and the officials, ‘You know, I’ve been around this game for 45 years and you tell everybody you’ve seen it all, you have not seen it all,’” St X. coach Mike Noszka said.

The game was suspended due to National Federation of State High School Association rules.

Moton and Reinhart plan to discuss Wednesday morning a plan for completing the game. Both teams have busy schedules in January but want to complete the overtime session.

If the game isn’t completed it would be ruled a no-contest, Snodgrass told WCPO late Tuesday night.

Although a smashed backboard is rare, Snodgrass said he’s experienced the same situation before as an OHSAA basketball administrator.

Snodgrass said late Tuesday night he would have to double check whether the statistics would count in a suspended game.

That would be especially significant from an individual player's standpoint, too.

Woodward coach Jarelle Redden was very pleased with his team’s strong effort from the outset. The Bulldogs led by as many as 13 points during the game.

“I have to give them credit,” Noszka said. “They came out hard against us.”

Redden is confident the game will be completed and that the Bulldogs can build from their performance.

“I am really happy with the growth of my team,” Redden said. “I thought our kids grew up today.”

Meanwhile, Mace continued his consistent play for the Bulldogs. He had seven points, 10 rebounds and three blocks Tuesday night, according to Redden.

“Davion has had four games in a row where he has played outstanding,” Redden said.

As for the broken backboard, Redden knew immediately the game would be suspended when Mace completed the dunk. More importantly, however, he couldn't be more pleased with the way the Bulldogs performed against the Bombers.

“I am happy for Davion because that is something that is never going to be forgotten,” Redden said.