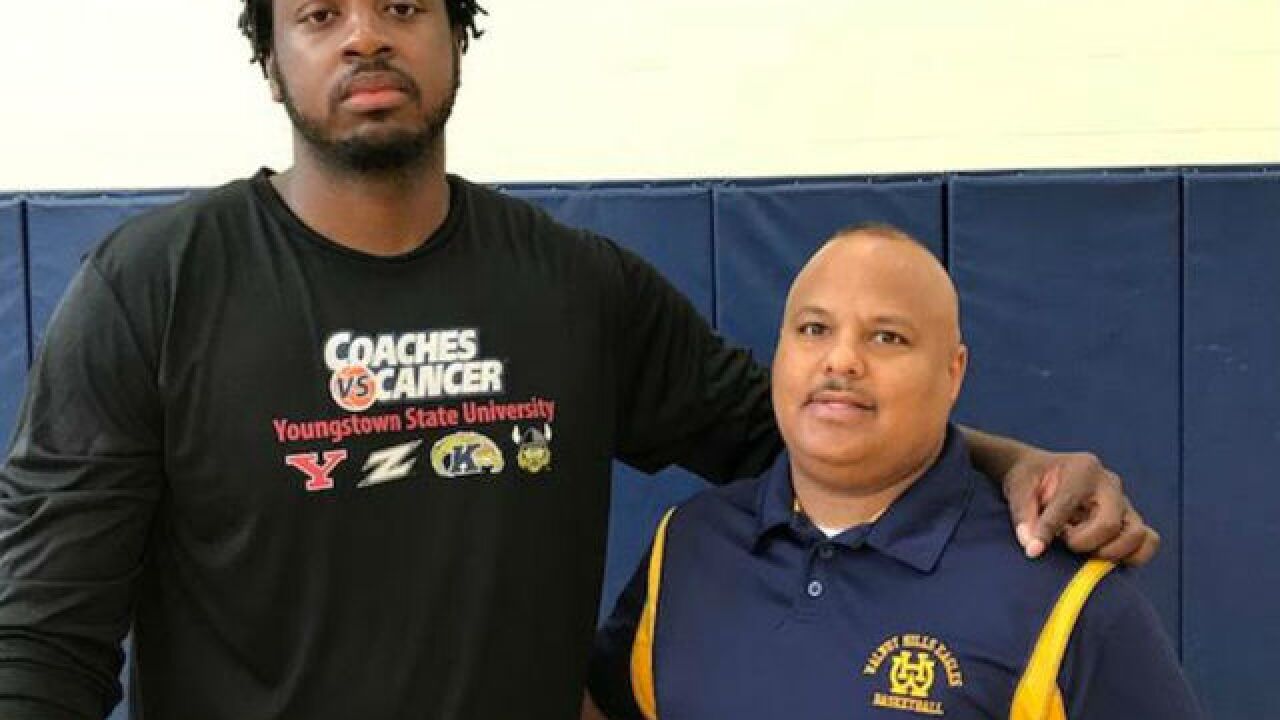 Copyright 2018 Scripps Media, Inc. All rights reserved. This material may not be published, broadcast, rewritten, or redistributed.
<p>Former Walnut Hills standout center Isaiah Johnson (left) and Walnut Hills boys' basketball coach Ricardo Hill are preparing for Columbus this weekend to participate in The Basketball Tournament (TBT). A $2 million team prize is at stake during the tournament this summer. (Photo by Mike Dyer)</p>

CINCINNATI – Ricardo Hill has already dreamed about what it would be like to coach in a championship basketball game for a $2 million team prize on ESPN next month in Baltimore.

“It’s incredible,” said Hill, who has been the Walnut Hills boys’ basketball coach the past six years. “You have three weekends. All you got to do is get hot.”

Hill is the Illinois BC (Basketball Club) head coach in The Basketball Tournament (TBT), a single-elimination, winner-take-all $2 million event this summer. He just needs six wins. It sounds simple enough.

The TBT is in its fifth year and features several former pro and college basketball standouts. Several of the teams feature former college players from the same school. The teams have already determined how the ultimate prize would be split.

Illinois BC, the No. 14 seed, plays No. 3 seed Hilton Magic Legends (Iowa State alumni) at 9:40 p.m. Saturday at Capital University. The game will be on ESPN3.

Illinois BC features former University of Akron center Isaiah Johnson, a 2013 Walnut Hills graduate who helped to lead the Eagles to the Division I state Final Four his senior year.

Johnson, a 6-foot-10 center, has worked on his perimeter game recently. His strength is in the low post where he has the ability to pass and score. He played four months in Sweden and returned to Ohio in November.

“This is an experience that is going to do wonders for me and my career going against really good talent and having good exposure to show what I can do,” Johnson said.

Johnson reached out to Hill about two weeks ago to ask if it he could be the team’s head coach. Hill jumped at the opportunity.

Johnson was at the Walnut Hills gym Friday working on his outside shot. He has fond memories of playing for the Eagles including the fun he had with a cohesive team his senior season.

“This is amazing,” Johnson said. “This is getting back to the roots especially coming into a gym where you never lost.”

The other eight players on Illinois BC are mostly mid-major players who will have a chip on their shoulder, Hill said. He likes their motivation.

The team is expected to practice Wednesday through Friday before leaving for Columbus this weekend.

“The first game is probably the most difficult because you really can’t scout,” Hill said. “Every game after that you can watch the team play in the tournament.”

If Illinois BC wins, it would play at 6 p.m. Sunday against either the University of Cincinnati or Texas Tech team in game on ESPN2 at Capital. The Super 16 is July 26-28 in Atlanta and the semifinals and finals will be Aug. 2-3 in Baltimore.

Hill admits Illinois BC is an underdog in the tournament but he’s preaching defense to the players in a group text message.

“You get to play against guys who always overlooked you,” Hill said. “This is your opportunity right here.”