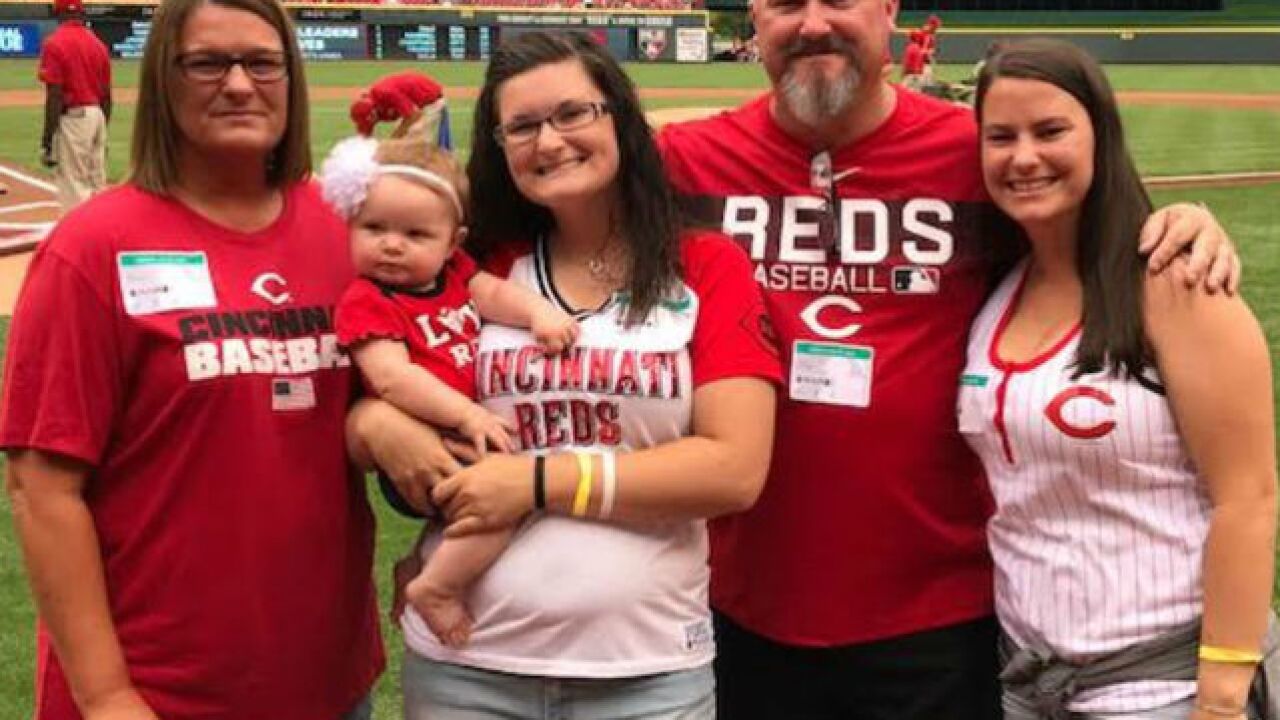 Copyright 2018 Scripps Media, Inc. All rights reserved. This material may not be published, broadcast, rewritten, or redistributed.
<p>Harrison baseball coach Shawn Sowders and his wife Misty and daughters Josie (left) and Lacey and granddaughter Piper were recognized by the Cincinnati Reds at Great American Ball Park Tuesday night. Shawn and Misty lost their Whitewater Township home to a fire June 16. (Photo by Mike Dyer)</p>

“I didn’t want him to say no,” said Zach Bonkowski, Reds Vice President of Promotional Events and Productions. “I figured we could spring it on him in the last minute.”

Sowders was floored when he found out. His wife, Misty, repeated the stadium public-address announcement for Shawn to take the mound after a pregame ceremony hosted by the Reds Tuesday night.

Shawn, a longtime Harrison High School baseball coach and Misty, a Harrison Junior School secretary, lost their Whitewater Township home to an electrical fire June 16 . The roller coaster of emotions continues. But, Tuesday night was a temporary reprieve from the rebuilding process.

They were joined Tuesday night by their two daughters, Lacey and Josie, and Lacey’s 7-month-old daughter Piper Campbell.

“This is definitely over the top,” said Lacey Sowders. “We appreciate all the support from the Reds, from the news (media) and from everyone.”

Bonkowski , a 1997 Harrison graduate and former Wildcats baseball player, helped to spearhead the effort at GABP. He had a good chuckle with the family after Sowders threw a solid strike to Harrison 2016 graduate Mitchell Hogue. Shawn certainly looked the part as a quarterbacks coach and former pitching coach.

“He has a long way to go but hopefully things like this can take his mind off the tragedy and get him back again so he is ready for the upcoming school year,” Bonkowski said.

A portion of the ticket sales to the Reds versus White Sox game will be donated to the Sowders’ family. Sowders received another 2015 MSA Sport Coach of the Year commemorative bat after the original was lost in the fire. Reds manager Jim Riggleman presented the bat and a plaque to Sowders.

Two dozen former Harrison players from the past two-plus decades also walked on the field and took a group photo with the family.

“If you watch the news you don’t see a lot of positives,” Shawn Sowders said. “This has been nothing but positive. It’s very uplifting. You have faith in people. Mankind is there when you need it and you don’t even have to ask. We haven’t asked for anything and people have voluntarily given their time, given their money and just sent cards. It’s amazing.”

The emotion in Shawn and Misty’s faces said it all during the ceremony Tuesday night. The GABP scoreboards displayed their wedding photo and other family photos through the years.

“It’s incredible,” Shawn Sowders said. “Beyond just our little town of Harrison, the whole city of Cincinnati has picked up on it and it’s really been a help for all of us.”

Shawn, a 1985 Harrison graduate, has never lived more than three miles from the baseball field. He's never locked his doors. His connection to the community -- forged through decades of coaching baseball, basketball and football as well as teaching social studies -- goes without saying. Harrison is home.

A GoFundMe account started June 17 – the day after the house fire – raised $28,014 as of Tuesday afternoon. Harrison High School hosted a car wash that raised about $3,400 for the family, according to Harrison Athletic Director Mark Meibers.

The Gold Star Chili restaurant in Harrison raised $1,000 during a fundraiser in late June. The tips from that evening were also donated to the family.

The Southwest Ohio Baseball Coaches Association will be donating $1,000 to the family. There was also a Midland Baseball fundraiser that raised $1,000. There is also a donation account set up through Fifth Third Bank. The account is titled: "For the benefit of Shawn and Misty Sowders."

The family continues to deal with insurance and figure out their next steps. Some families in Harrison have offered their homes to help the family while they stay with Shawn’s parents.

Lacey Sowders said the family hopes to have a rental home in August. She said her parents continue to be overwhelmed by the amount of support from the community.

“It’s crazy,” Lacey Sowders said. “It’s definitely a silver lining as far as what can come from a tragedy especially in a small town.”