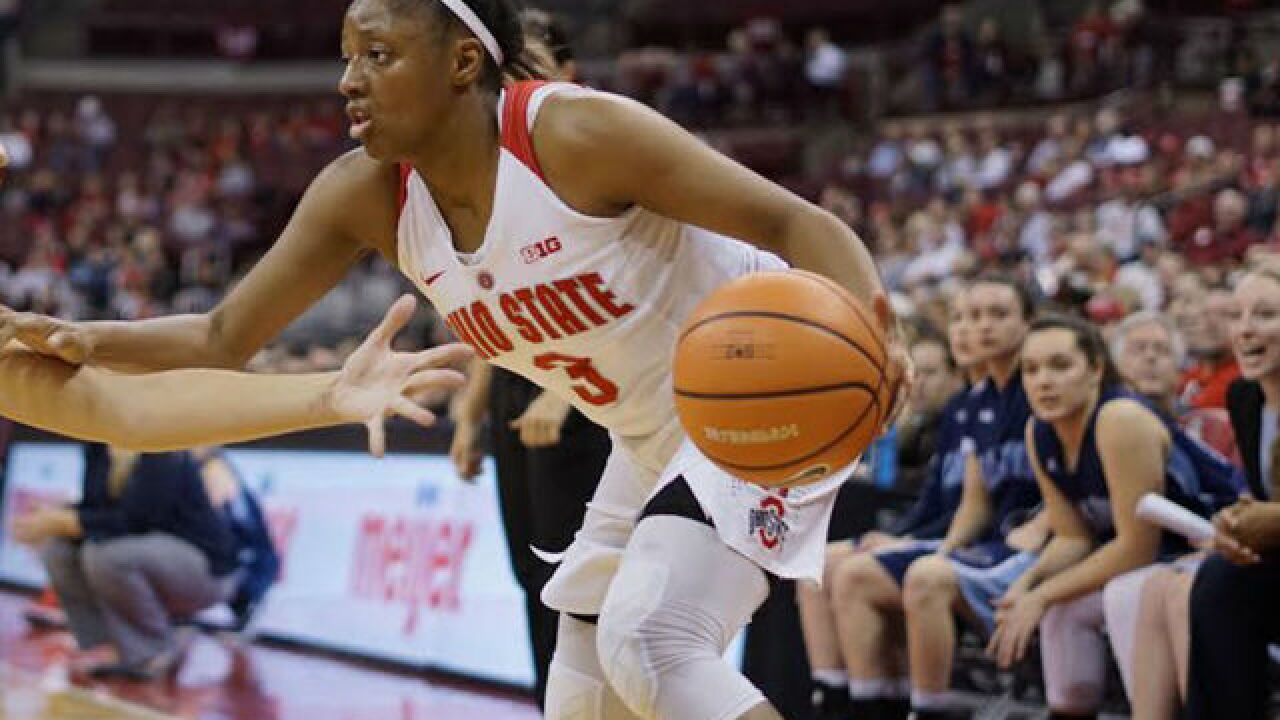 Copyright 2018 Scripps Media, Inc. All rights reserved. This material may not be published, broadcast, rewritten, or redistributed.
<p>Kelsey Mitchell scored 3,042 career points at Ohio State during her four years as an All-American in Columbus. (Ohio State Athletics photo)</p>

NEW YORK – Former Ohio State guard Kelsey Mitchell was selected No. 2 by the Indiana Fever in the WNBA Draft Thursday night at the Nike Headquarters.

Mitchell, the only four-time collegiate All-American at Ohio State and a 2014 Princeton High School graduate, was projected by several mock draft sites this week to go to the Fever.

Mitchell, who scored 3,042 career points at Ohio State – the second most in NCAA women’s basketball history – will give a boost to an Indiana team was second-worst in offense last season at 75.1 points per game, according to ESPN.

Mitchell told WCPO earlier this week she will attend the USA Basketball Women’s National Team Training Camp in Seattle April 23-27 before reporting to her WNBA team.

The WNBA training camp opens April 29 when the preseason starting May 4. The regular season starts May 18.

“An incredibly bright future ahead,” McGuff said. “I can’t wait to see how well she does.”

In addition to Mitchell's scoring, in which she was third in the country at 24.3 points per game, she dished-out a career-high 148 assists and had a career-low 78 turnovers this season for Ohio State (28-7).

Mitchell also shot 44.8 percent from the floor and 40.2 percent from three-point range which were both the best of her career. She was named the Big Ten’s Player of the Year for third time and became Ohio State’s first four-time All-American.

Mitchell also made 497 career three-pointers which is 56 more than any other female in NCAA history. Mitchell owns 30 OSU, Big Ten or NCAA records and is just one of four players in NCAA history with more than 3,000 points and 500 assists.

“Her WNBA career is going to be brilliant because I think she is going to be able to do other things,” ESPN analyst Debbie Antonelli told WCPO in February. “She is not going to get that many shots. But, she has a skill set. Her ability to distribute, play up-tempo and make decisions are going to be enhanced even more because of the rules in the WNBA are different from college.”

As a McDonald’s All-American, Gatorade Ohio Player of the Year and Ohio Ms. Basketball winner in high school, Mitchell helped lead Princeton to the Division I state title in 2014 as a senior. Her impact with the Greater Miami Conference member school is still very significant.

“We’re very, very excited,” Princeton Athletic Director Gary Croley Jr. said. “Kelsey not only represents her family, not only represents herself and now Ohio State, but of course she represents our whole district. Being a kid that has grown up and went through our whole system we’re very, very excited.” “She touches everyone from the likes of teachers, custodian workers, security guards, bus drivers – of course coaches and teammates. She just touches a little bit of all of our community and so we are all rallying behind her and expecting the best.”

Mitchell is the second Princeton High School alum to be in the WNBA. Dee Davis, a former Vanderbilt standout, played for Houston in 2007.