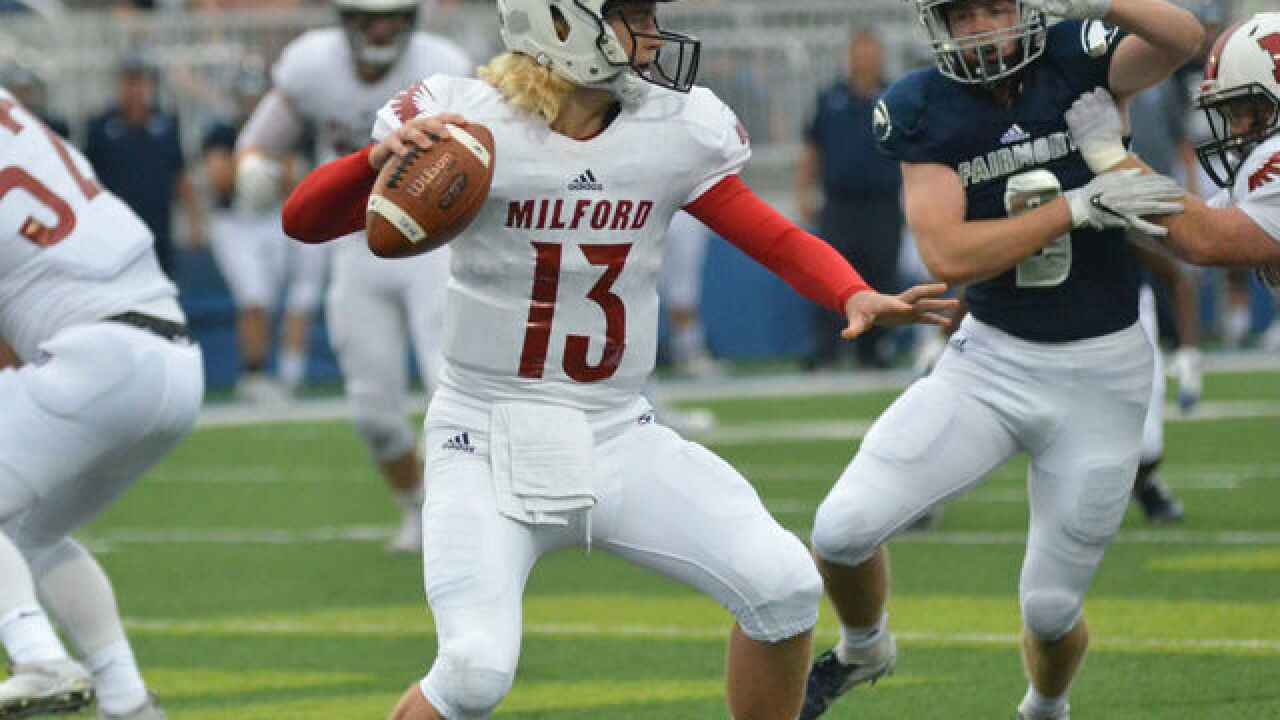 Copyright 2018 Scripps Media, Inc. All rights reserved. This material may not be published, broadcast, rewritten, or redistributed.
<p>Milford junior quarterback Hunter Johnson has thrown for 1,247 yards and 15 touchdowns for the Eagles (4-1) this season. (Photo courtesy of Shawn Sell/Milford sports information)</p>

If last season’s Milford at Anderson football game is any indication, the potential is there for 80 to 100 points between the two teams.

“That will be a barn burner,” Grippa said. “Lots of offense. It will be fun.”

Milford defeated Loveland 71-21 Friday night, marking the first time Milford scored that many points since at least 2000. It was the most by a Milford football team possibly ever.

The Eagles are looking ahead to next week's significant matchup at Anderson. Milford defeated Anderson 41-40 in late October 2017 to help the Eagles clinch their first playoff appearance since 1986 .

This season, both teams enter the game with 4-1 records with plenty at stake again.

“This is a big game,” Anderson coach Evan Dreyer said. “Milford is extremely well coached. Their quarterback, wide receiver and tight end are great. Their defense flies around to the ball.”

Kings and Milford are tied atop the Eastern Cincinnati Conference with 2-0 conference records, and Anderson is in a four-way tie behind them. Kings defeated Turpin 37-34 in a key ECC game Friday night.

Milford starters only played one series in the second half Friday night against Loveland.

The previous high in points was 56 in three games in 2000 and again in 2010 according to Milford sports information director Shawn Sell.

It was the first time Grippa recalled ever having a team score that many points in a game during his coaching career that started in 1987.

Milford had 507 yards of total offense for the night, and they led 22-0 at the end of the first quarter. Senior running back Cameron Kells had 14 carries for 153 yards and three touchdowns. He also had four receptions for 85 yards and a receiving touchdown.

Junior quarterback Hunter Johnson was 18 of 26 passing for 327 yards and six touchdowns. He was one touchdown away from entering the Ohio High School Athletic Association record book for a single game, which calls for at least seven passing touchdowns.

“The last two weeks it has clicked in for him,” Grippa said. “I’m real proud of him. He’s done a really good job.”

While the stats weren’t immediately available, the Redskins have been led statistically by junior quarterback David Thompson, who had 1,204 passing yards entering Friday, and senior receivers Eric Curless and Joey Newton with 605 yards and 450 yards, respectively, prior to Friday night.

Deer Park is 5-0 for the first time since 2007. The Wildcats defeated Taylor 23-20 Friday night. Sophomore Jerry Heard was 5 of 7 passing for 82 yards and a touchdown. He also had 20 carries for 119 yards and a touchdown. Senior Joseph Hocker (Florida International commit) had a 75-yard touchdown reception, two sacks and a safety.

Junior quarterback Evan Prater was 5-of-7 passing for 145 yards and four touchdowns. He had a rushing touchdown, too. All the Wyoming starters played only in the first half.

Fairfield had 553 yards of offense including five touchdowns from junior tailback JuTahn McClain in a 41-27 win over Lakota East. It also marked the return of Fairfield senior quarterback Jeff Tyus , who had not played since Aug. 31 due to a shoulder injury.

McClain had 24 carries for 139 yards and four touchdowns. He also had four receptions for 96 yards and a touchdown.

Roger Bacon sophomore running back Corey Kiner has 2,158 rushing yards, which puts him at fourth in all-time rushing yards in the school's history, according to Roger Bacon Assistant Athletic Director Brandon Spaeth. Kiner, who has scholarship offers that include Indiana and Kentucky, is third all-time with 29 rushing touchdowns in school history. He played in his 14th game Friday night. Roger Bacon lost to Badin 42-35 in overtime.