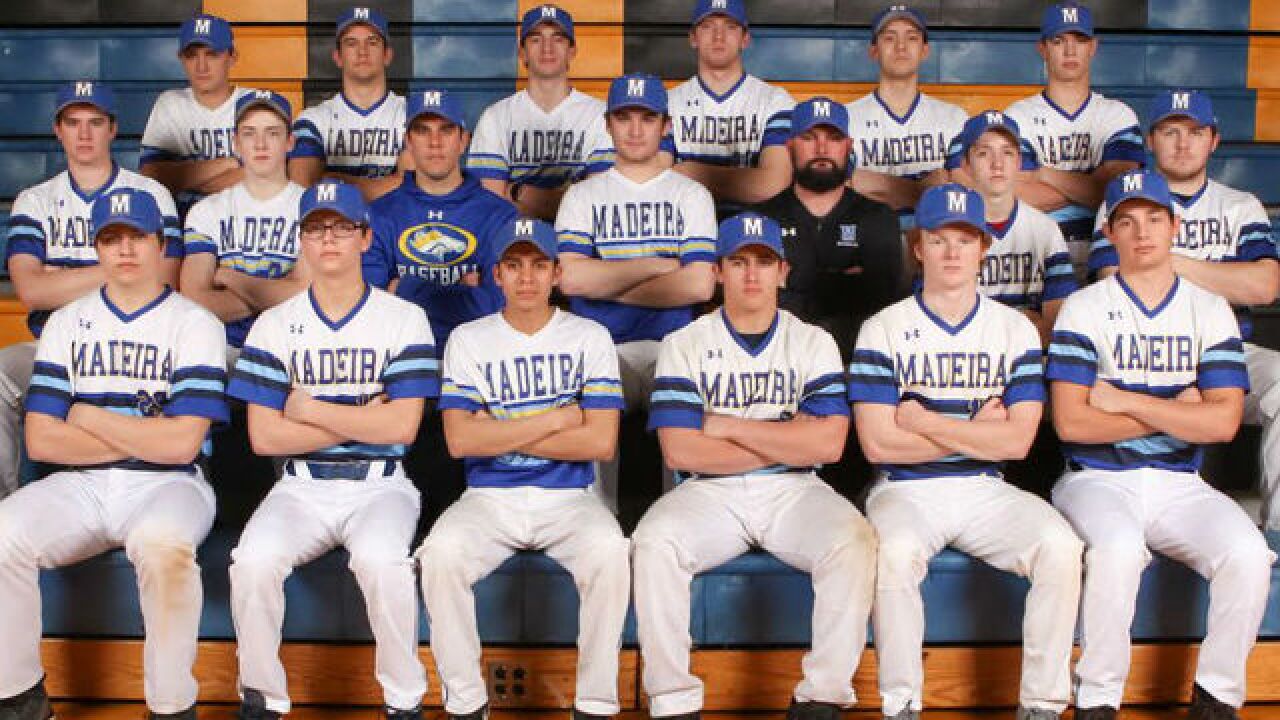 Copyright 2018 Scripps Media, Inc. All rights reserved. This material may not be published, broadcast, rewritten, or redistributed.
<p>The Madeira baseball team finished the season with a 21-7 record. The Mustangs were a Division III state semifnalist. (Lifetouch photo).</p>

COLUMBUS, Ohio -- Sam Wirsing will miss the camaraderie of his Madeira baseball teammates.

Pat Thatcher won't soon forget the effort every member of the team made in the weight room and in the batting cage since last September.

Madeira coach Scott Stocker didn't have to use many words Thursday night to sum up how special this squad was this spring.

"(They're) the hardest working team I've ever had," Stocker said.

Those characteristics identified the Mustangs all spring. Although Canfield South Range defeated Madeira 7-0 in a Division III state semifinal Thursday night at Huntington Park, the game won't define the Mustangs.

"This was a very special run," said Wirsing, who was 2-for-3 at the plate Thursday night and pitched in relief. "Coming into this, we had a lot of momentum from years prior. We had a lot of stuff we learned. We were pretty strong -- our mentality and companionship with each other. We made a great run. We just fell short."

Madeira (21-7) made its first state baseball tournament appearance since 2011 when the Mustangs were the Division III state runner-up.

"We've spent hours together," said Thatcher. "The hard work paid off this season. It was really great to see that, and I am really appreciative to the guys for that."

Madeira also made state tournament appearances in 2007, 2002 and was the Division III state champion in 1999.

Through five full innings Thursday night, it was anyone's game. Madeira had three hits and South Range just one up until that point.

Madeira responded quickly and threatened in the bottom of the sixth and had bases loaded with no out.

The Mustangs flied out during the next at-bat. Then, the South Range shortstop completed a double play after he caught a line drive and touched second base to tag the runner out.

"You know what? It's baseball," Stocker said. "We lost to a good team. We had six hits and played solid defense. (Junior pitcher) Tyler (Sullivan) and Sam both threw well. It just didn't go our way."

Madeira stranded six runners on base for the game. Madeira hit eight or nine balls that could've created additional offense but were caught.

Gehring was very poised as a freshman and had six strikeouts and allowed six hits in seven innings.

"The kid competes," Stocker said. "He's going to be special."

"It's not easy to find a team where everyone gets along so well," Wirsing said. "That's what I am going to miss the most. Just being able to have great times with these guys and be able to pick each other up."

South Range added two additional runs in the seventh to make it 7-0.