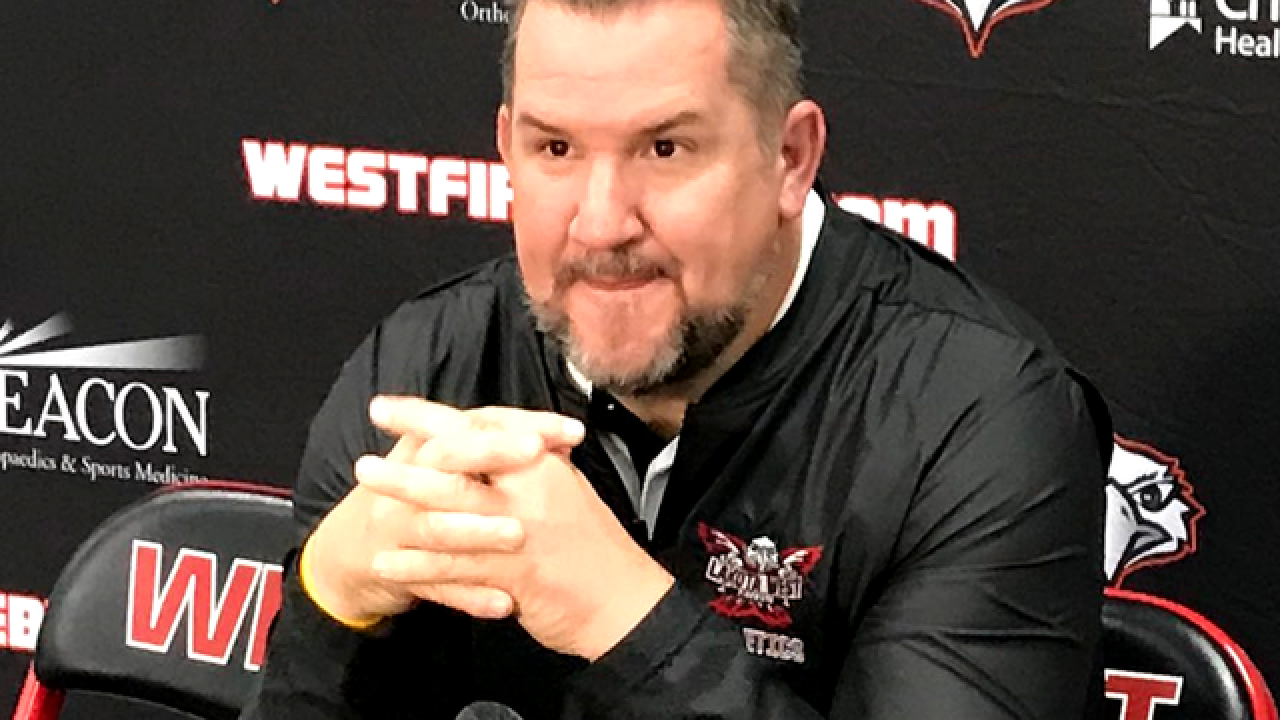 WEST CHESTER TOWNSHIP, Ohio -- Wearing a Lakota West pullover in front of a Firebirds banner, Tom Bolden sat down in front of a dozen reporters early Tuesday night in the school cafeteria.

Bolden is never shy in front of a camera, but this was a new situation for everyone in the room.

"It was a little surreal to say the least," he admitted. "But, it's good to be here."

Bolden, the former longtime Colerain coach, was approved Monday night as the next Lakota West head football coach by the Lakota Local School District Board of Education. He is also the high school building coordinator and assistant to administration at Lakota West.

"Obviously it's a great school, a great community and it's a football team loaded with talent," Bolden said. "A lot of potential. It's a sleeping giant. I think we have an opportunity to be great, and it's why I want to be a part of this."

Bolden, who led Colerain to a Division I state runner-up finish, will finish the school year at Colerain High School as a physical education teacher. Tuesday night was an opportunity to introduce himself to the Lakota West community.

It didn't take long for him to command the cafeteria. He offered the football families a glimpse of what he's about: Coaching the players to their fullest potential but also striving to make them better young men in society.

He succeeds Jeff Wadl, who was the Lakota West interim head coach this past season. Wadl took over for longtime head coach Larry Cox who stepped down this past spring.

Bolden, 49, didn't take the choice lightly. A lot of factors went into the decision-making process, including the timing for his family. Bolden said he heard the rumors leading into his decision but didn't worry what others would say. He simply didn't want to let his Colerain players down when he told them.

"It was the hardest thing I ever had to do," Bolden said.

Bolden said there were a lot of tears and emotion when he informed the Colerain team on Friday afternoon, but the past few days have improved the mood at the school.

He added the outcome wouldn't have been different if the Cardinals won the state title in Canton Nov. 30.

"Time is time, and I think that's how it worked out," Bolden said. "It has nothing to do with not winning that. I think it was something that was going to happen."

Bolden led Colerain to nine consecutive postseason appearances and 11 trips to the playoffs overall in 12 years. Colerain won three regional titles during his time on Cheviot Road. His team had three Division I state semifinal appearances (2018, 2017 and 2015) including a state runner-up finish this year in Canton after his team was ranked No. 1 in Ohio all season.

On Tuesday night, Bolden said there was a simple reason why he left Colerain for Lakota West: "I like winning.

Bolden addressed the players and their families Tuesday night. He shook hands and made introductions. He reminded the players he will see them at a workout on Thursday at school. He is still putting together his staff at the moment.

Lakota West 2020 linebacker Daved Jones said he's looking forward to playing for Bolden. He had to double-check the news twice on social media when he saw Bolden was named the Firebirds' coach on Friday, but the last few days have felt like a burst of energy for the program.

"You hear him, and you can't just help but listen to him intently," Lakota West athletic director Scott Kaufman said Tuesday. "…When you watch him one-on-one and you watch him take over a room you see real quick where it comes from. It's powerful stuff."