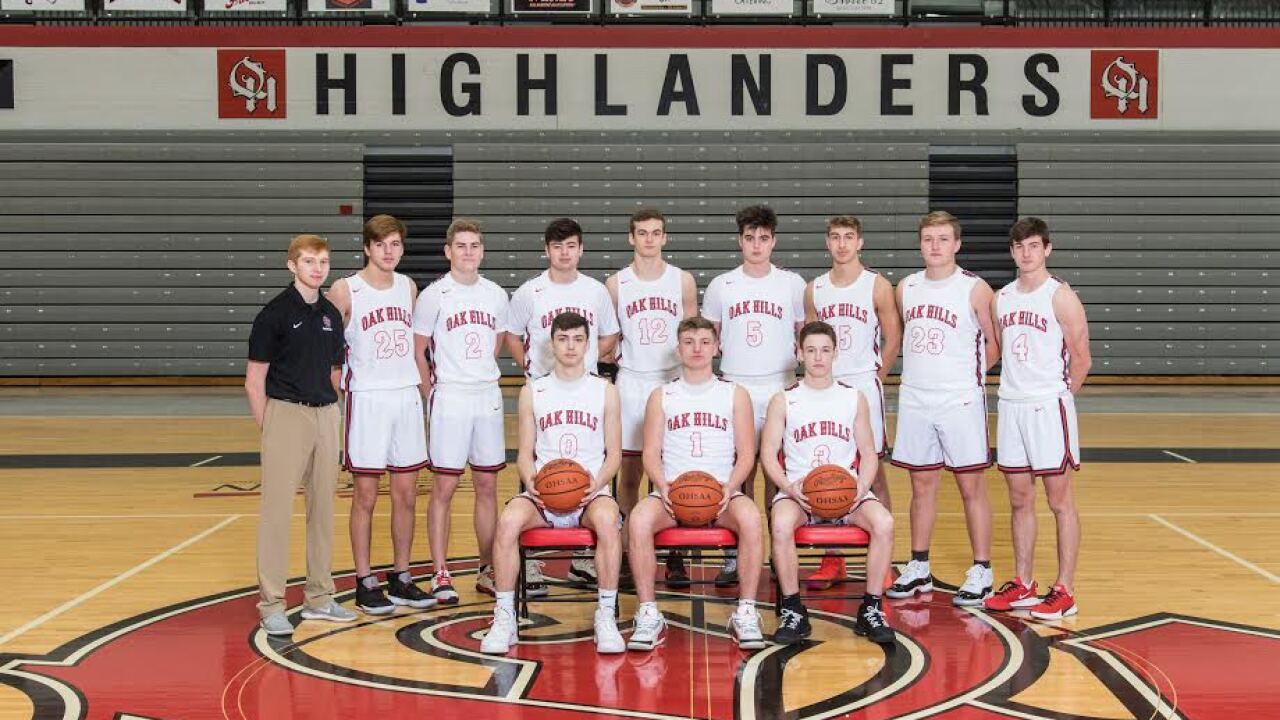 GREEN TOWNSHIP, Ohio — Oak Hills senior guard Cam Brandt kept urging his teammates to believe a rally was possible in the fourth quarter Tuesday night. He didn't want them to stop pushing forward on the court.

The Highlanders didn't lead Lakota East until 1:02 left in the game, but their perseverance paid dividends.

Oak Hills went on a 9-2 run in that final 1:02 to defeat the visiting Thunderhawks 53-46 in a Greater Miami Conference basketball showdown.

“It has to do with their belief in each other,” Oak Hills coach Mike Price said. “They love each other. They love to play. They love to compete. We just keep doing it. I hope it doesn’t end.”

“The cheering section was there for us all night,” Dennis said. “Going back to practice, I mean, I love being with these guys every single day. To get that win tonight was real special.”

Brandt made a game-winning shot to defeat host Lakota West 65-63 Jan. 3. Believe was an operative word then just as it was Tuesday night, when the Highlanders trailed by five at halftime and trailed by as much as eight in the second quarter.

The Highlanders have been plagued by injuries this season, so only six regular varsity players were in warm-ups Tuesday night. Senior forward Jacob Ramstetter is scheduled to have surgery Wednesday for a torn meniscus, Price said.

Price said the players have stepped up with mental and physical toughness despite their injuries. Adversity helped rally the squad together.

“You can see we never win layup lines,” Price said. “We lose every layup line when we come out and you look at which team is which. You aren’t going to pick us very often. So we just work on that a lot. I think that toughness and the skill work and the morning shooting and everything we do – that just helps us.”

Junior guard Adonis Caneris played a significant role defending the paint and in rebounding. His 3-pointer broke the second tie of the night and gave the Highlanders a 47-44 lead with 1:02 left.

Even though the Highlanders trailed 26-21 at halftime, Brandt said Oak Hills is a second-half team at home and Price encouraged the squad. The Highlanders proved their mettle in the second half.

“A great environment,” Brandt said. “Another good outcome with the crowd. It was a good step-up by other guys on the team. Great energy. I’m proud of the guys. Coach Price did a great job along with (Associate Head) Coach (Greg) Rolfes of scouting. It was a great team win.”

Senior Kaden Fuhrmann tweaked his ankle against Fairfield Jan. 3 and is day-to-day, Adkins said. But, the Thunderhawks hope to improve upon the lessons from Tuesday night.

"Defensively, we weren't locked in," Adkins said. "Austin Dennis had a phenomenal game and Dietrich had a good game. Once again, these are scouting report things that you need to know about guys. It wasn't important to us. And down the stretch a guy who you want to take away his right hand and we are letting him drive right and get to the rim for and get and-ones. Like I said some things just aren't important to us right now and if those things don't change they will continue to happen."