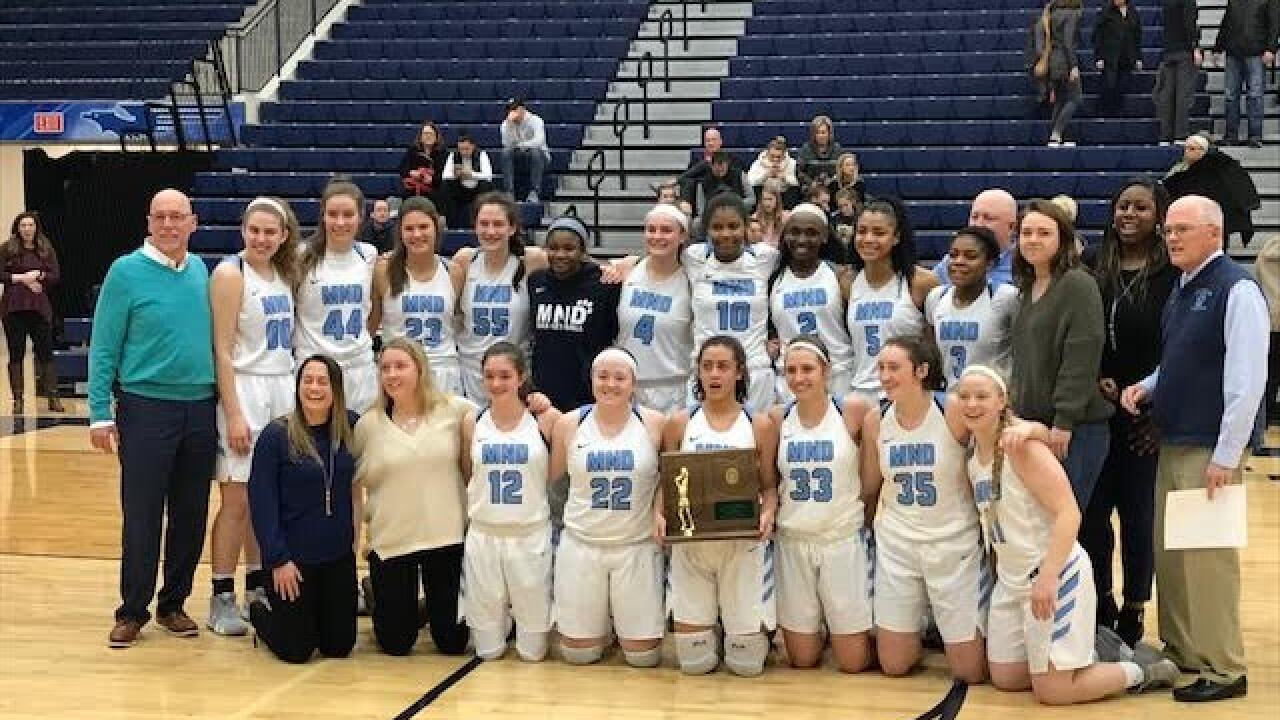 KETTERING, Ohio — The Mount Notre Dame basketball team’s motto has had a singular focus all season.

'One' is the operative word. The Cougars approach each day and every game as a team with that mindset. Resilient could be added to the sayings after this week’s regional tournament.

MND persevered through a Centerville surge late in the fourth quarter Saturday afternoon as the Cougars defeated the Elks 70-63 in the Division I regional final at Trent Arena.

MND (25-2), ranked No. 8 nationally by the MaxPreps Xcellent 25 (editorial rankings), advances to play Canton GlenOak (24-2) in a Division I state semifinal at 6 p.m. March 15 at Ohio State University’s Schottenstein Center in Columbus.

“It just means the world to go back to The Schott,” said MND senior guard Gabbie Marshall.

Next week will be the ninth state tournament appearance for the Cougars. MND has won state titles in six of its previous eight appearances.

MND coach Dr. Scott Rogers said Saturday’s regional title was like the first time he won the regional in 2004.

But he continued to place the focus on his very talented group of upperclassmen and younger players.

“I am just proud of them,” Rogers said. “I’ve never played a minute yet. It’s them.”

Senior forward Julia Hoefling, a Loyola University Chicago signee, had a game-high 23 points to go along with six rebounds and two assists. She was also a key player on the defensive end down the stretch.

“This means everything,” Hoefling said. “This is what we worked for from the beginning of the summer this year.”

Freshman guard KK Bransford had 17 points and seven rebounds. She was 7 of 9 from the free-throw line. The standout freshman stayed 30 minutes after Friday’s practice working on free throws and it paid off Saturday.

Bransford doesn’t play like a typical freshman. Her growth could be partly attributed to the encouragement from upperclassmen on the team.

“It means a lot,” Bransford said. “I just know that all the hard work at the beginning and the end of the season is paying off. Our bond is just so tight.”

Centerville was within eight (30-22) on a jumper at the 1:09 mark, but the Cougars scored five in the final minute to lead by 11 at halftime.

MND led 48-41 at the end of the third quarter. Centerville closed the gap to four points a couple times midway through the fourth, but Bransford’s two free throws with 2:41 left pushed the lead to 64-54.

The other Division I state semifinal March 15 is Toledo Notre Dame Academy (23-5) against Pickerington Central (27-1) at 8 p.m.

The Division I state final is 8:30 p.m. March 16 at the Schottenstein Center.