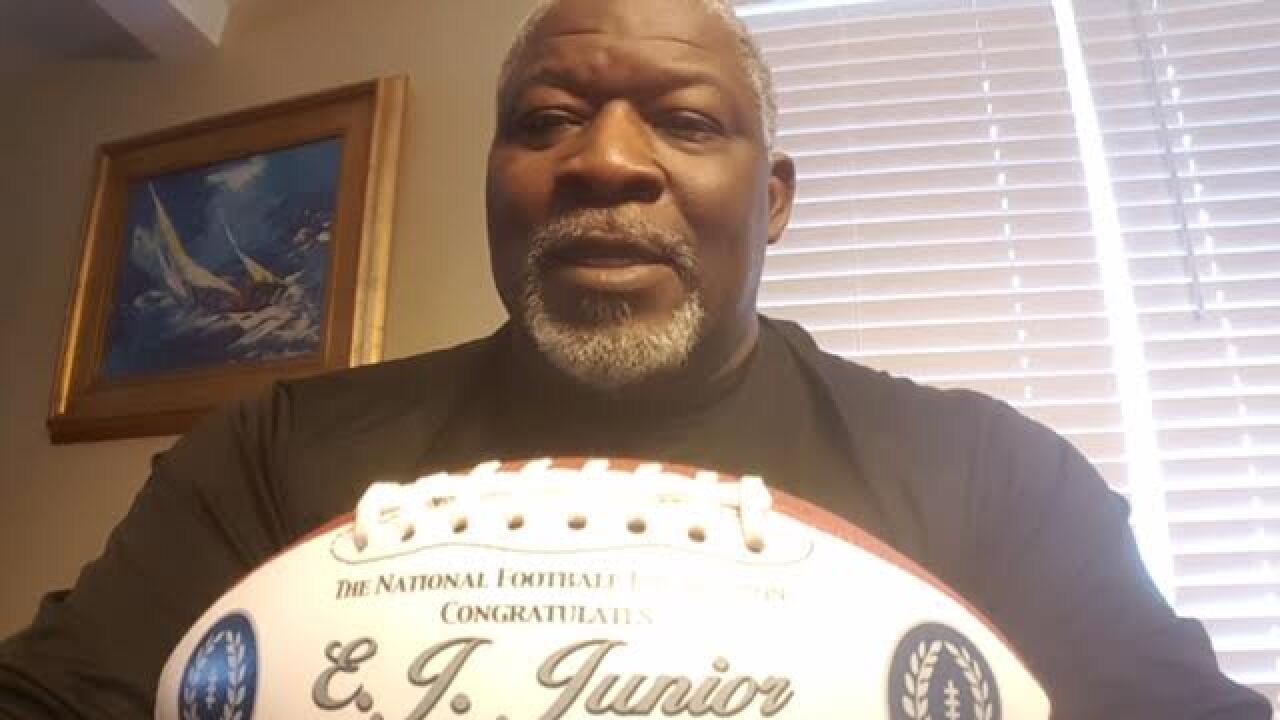 MIDDLETOWN, Ohio — E.J. Junior hadn't ordered anything from Amazon. So that's when his curiosity began.

When the Middletown High School assistant football coach and former NFL player was informed by his family he received a package in the mail last week, he wasn't sure what to think.

Junior, a former University of Alabama standout linebacker, opened the package and found a blue and white National Football Foundation football that welcomed him to the College Football Hall of Fame. Junior was incredulous.

"I fell to my knees and thanked God," Junior said Tuesday.

Junior, a Middletown assistant coach the past two seasons, had been on the ballot for the past five years. He'd always received a phone call in the past, but this was truly unique.

The College Football Hall of Fame Class will be officially inducted during the 63rd NFF Annual Awards Dinner on Dec. 8 at the New York Hilton Midtown.

That is an extra special occasion for Junior, who will turn 61 that day.

While Junior admits the honor took a while, he prefers the spotlight to be on his former teammates, coaches and staff members he knew while he was with the Crimson Tide.

"It's really an awesome honor for him," Middletown head coach Don Simpson said. "Coach Junior - he is a true role model. He's everything you want in a coach. A lot of the kids don't know how great of an athlete he was. They know him as one of our defensive coaches who tells great stories about legendary moments with Bear Bryant. They don't know who Bear Bryant is. The coaches are more locked in on the stories than the players are."

"He doesn't walk around boasting or bragging about that," Simpson said. "He is a fundamentally sound coach. He is all about discipline and structure."

Junior, who played for 13 years in the NFL, has been the Middies' defensive line coach since 2018.

"This is a great honor for him," Middletown Athletic Director JD Foust said. "Just his leadership. The kids know him how he played for Bear Bryant at Alabama. I know he plays a crucial role."

Family and football run deep with Junior at Middletown. Former University of Cincinnati fullback E.J. Junior IV, Junior's son, coached the Middies' outside linebackers in 2019. This season, he will coach the running backs.

Junior's other son, 2021 linebacker Cameron Junior, is one of the area's top recruits in his class and has several scholarship offers, including UC, West Virginia, Pittsburgh and Mid-American Conference programs.

The game has represented so much to the newest College Football Hall of Famer.

A unanimous first team All-American in 1980, E.J. Junior was a finalist for the Lombardi Award and helped guide Alabama to consecutive national championships in 1978 and 1979.

He helped the Crimson Tide post a 44-4 record, which included a 28-game winning streak, while never finishing lower than No. 6 in the national rankings.

Junior was the leader of a defense that allowed only 98 points during his senior campaign and just 67 in 1979. He racked up 190 tackles and 21 sacks for the Crimson Tide while playing alongside Hall of Famers Marty Lyons and Ozzie Newsome, and his 10 career forced fumbles are tied for the school record.

Junior became an ordained minister after retiring from the NFL while also entering the coaching ranks. He started out as a linebackers coach with the Seahawks and had stints with the Dolphins, Minnesota Vikings, Jacksonville Jaguars and Rhein Fire of NFL Europe.

Simpson couldn't be more proud for his friend and the impact he continues to make in Middletown.

"He's awesome with the kids," Simpson said. "He's that father figure that you need on the staff."