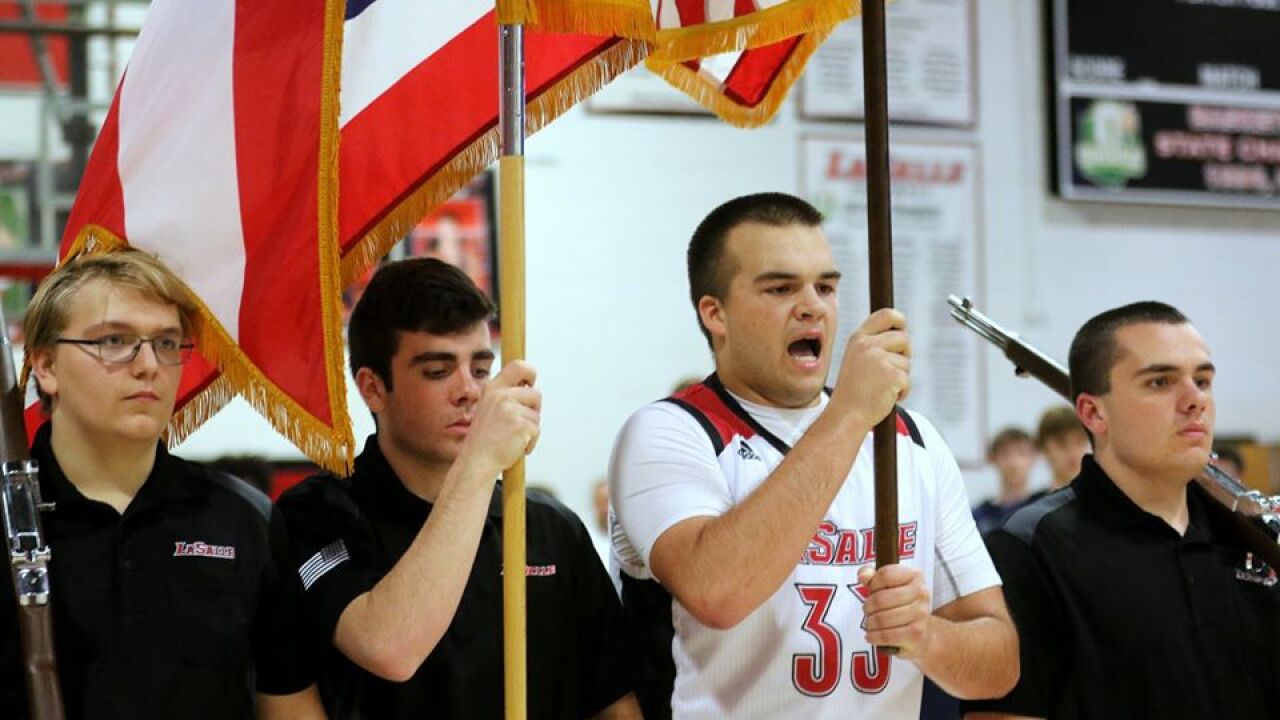 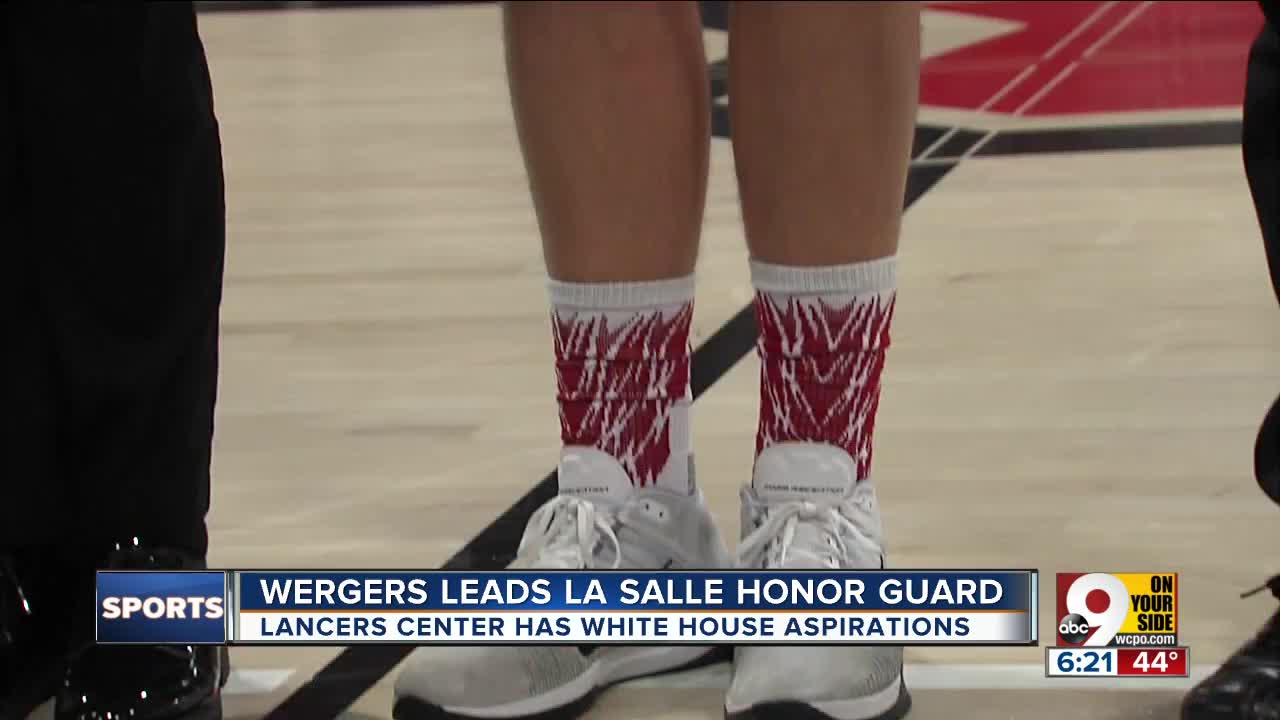 GREEN TOWNSHIP, Ohio — Mike Wergers has a 4.3 grade-point average, holds La Salle’s single-game rebounding record in the basketball program and hasn't missed a day of school in his life.

The 6-foot-3, 245-pound senior center wears a signature headband and is a team captain known for his leadership for the Lancers (13-1). His teammates call him “Prez.”

But he's known for much more than basketball.

“Mike is a great student-athlete and role model who embodies the true principles of serving God, country and one another,” La Salle principal Aaron Marshall said. “We are lucky to have him at La Salle.”

Wergers, 18, and three of his classmates are present on Bill Cady Court for the national anthem during the Lancers’ home games just like they were at Lancer Stadium during the state championship football season.

La Salle senior guard Derek Eddings wasn’t sure what to think when he saw Wergers in his basketball uniform earlier this season before the anthem.

Wergers, who set a school single-game record 22 rebounds in a game in early January 2019, is in his full basketball uniform as he carries the United States flag and does the cadence before returning to the Lancers' bench.

“Before I leave to come to the gym before a game, I always watch a few videos and all of them are military centered,” Wergers said. “The last one I always watch is, I watch a video of the D-Day (invasion). In the background is Dwight Eisenhower’s speech. He is my all-time role model. It really gets me in the mood of why I believe I play, why I try to emulate the way I play; it’s for the veterans for all their sacrifices.”

Wergers, who lives in Delhi Township, wants to serve in the military with the Naval Academy as his top choice.

Ultimately, he wants to be in the White House in 2052. He’s already started an unofficial campaign.

“He takes this seriously,” La Salle basketball coach Pat Goedde said. "His approach to everything, whether it be basketball, country or his family, he is totally serious on what he wants to do. If he puts his mind to it, I guarantee you he will be the president in 2052, and hopefully I will be around to see it happen because it would be pleasure to see a guy like that get what he has dreamed and cared about for his whole life.”

An avid Jeopardy fan, Wergers can also recite the order of the U.S. presidents forward and backward, according to his father. Mike has a poster of all the presidents in his room.

Mike hasn’t played video games since the seventh grade. He'd prefer to study history. On Sunday night, he watched the movie “1917” with his parents, James and Renee, for a second time since it premiered.

Eddings says he’d vote for his teammate and friend. After all, Wergers strives to make his teammates better.

“He is so driven at what he does and he is his hardest critic,” La Salle assistant coach Brett Kostoff said. “We don’t have to get on Mike to get more out of him. Mike gets more out himself because he is that hard on himself. That drive that he has I think is going to push him toward his goals.”

The honor guard plans to be at the school’s veterans appreciation assembly next month, and Wergers said there are plans to be at a Reds game during a weekend in late May.

“We have great veterans' support, and that’s what means the most to us is being able to give back to the veterans and making them proud, letting them know that there are patriotic young Americans out here,” Wergers said.

Other schools have taken notice of his efforts.

In the Lancers’ home game against St. Xavier Jan. 17, Wergers heard chants of "Mike for President" from the St. X students. He said carrying the flag and doing the cadence still surprises some fans at games, but they respect his efforts.

“The St. X guys love Mike, and so do Elder (students),” Eddings said. “Mike is a fan favorite. The headband, the presidential campaign — they love it all.”

Wergers says La Salle basketball has helped him mature as a young man and to persevere in every situation.

“La Salle basketball tells me you have to give it your all — all the time," Wergers said. "It speaks to your character, how you are in society, how you are going to be as a father, as a husband, as a son."