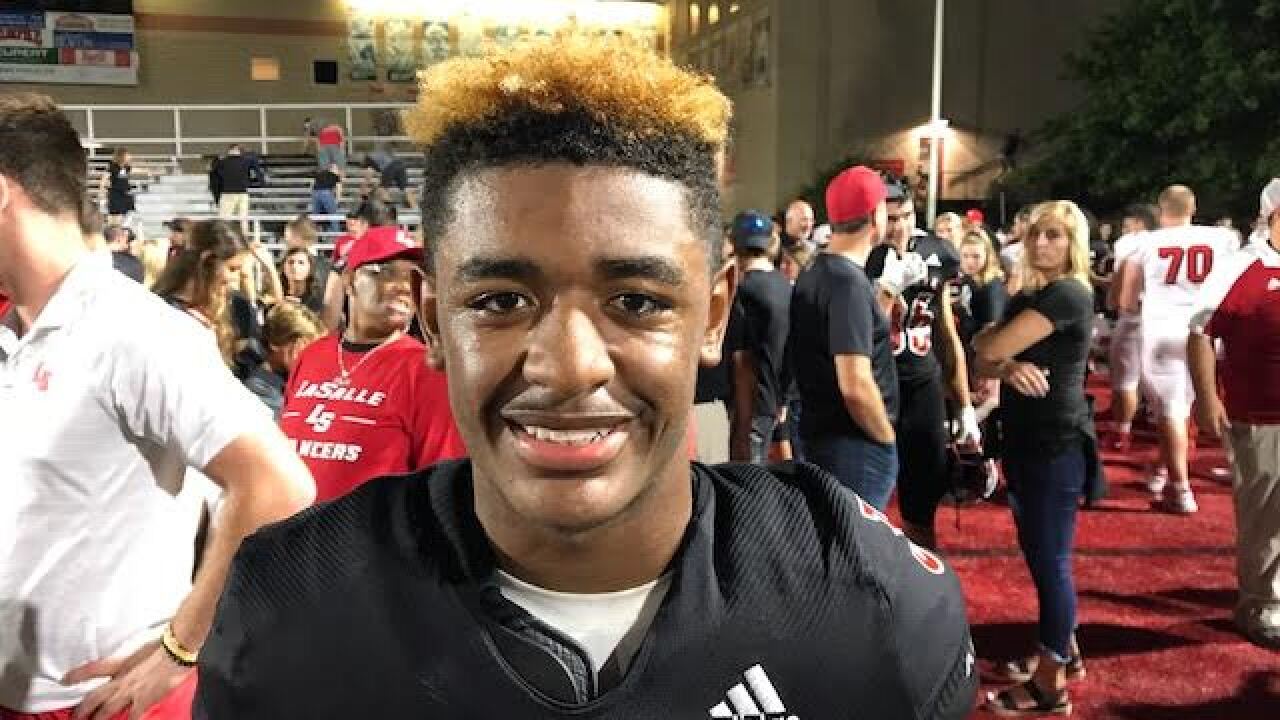 While players, coaches and fans projected whether the opening game of the season would be played during a nearly 90-minute power outage at the stadium prior to kickoff, Branam looked at his phone and studied Hudl film of the Lakota West defense before his first varsity start.

“It definitely added a little anxiety to me waiting there even longer,” Branam said. “I just wanted to get it over with and get the game going. This crowd is just amazing. This atmosphere is just the best.”

Branam was the junior varsity starting quarterback in 2018. He studied the varsity quarterbacks and made an effort this preseason to avoid turnovers while managing the offense.

“For his first start against I think a pretty good defense – they are going to win some games this year – he did a really good job,” La Salle coach Pat McLaughlin said. “We are really proud of him.”

Branam scored on a 5-yard touchdown run and later threw a screen pass to sophomore Gi’Bran Payne who took it the end zone from 42 yards out to help the Lancers to 31-7 win over visiting Lakota West Friday night.

Payne also scored on a 15-yard touchdown run late in the third quarter to lift the Lancers (1-0).

“We got a lot better,” Payne said of this past offseason. “We worked a lot harder. We push every day. We live for these moments.”

La Salle (4-5 in 2018) missed the postseason last season for the first time since 2013 so the players and coaches made a concerted effort this offseason to improve in all aspects especially in team bonding.

"It’s not a must-win for the playoffs but it’s a must win for our program," La Salle senior running back Cam Porter told WCPO earlier this week.

The Lancers led 17-0 at halftime. Besides Lakota West freshman Alex Afari’s 35-yard punt return for a touchdown with 4:51 left in the third, the Lancers defense proved to be very effective.

“We’ve been working for this and I think last year stuck with them the whole time,” McLaughlin said. “We have a great group of seniors. A fantastic effort in all three phases – offense, defense and special teams. We’ve got to clean some things up and if we do that we keep getting better and better. We have an opportunity to have a good season.”

Porter (Northwestern commit) had 108 yards rushing including 69-yard touchdown carry on the first play from scrimmage in the third quarter.

Senior kicker Jake Seibert (Ohio State) also made a 21-yard field goal for the Lancers, who play at Mason (0-1) Sept. 6.

The Firebirds, seeking their first winning season since 2015 and first postseason appearance since 2014, had 65 yards of passing and were just 4 of 14 on third down conversions.

“I didn’t think it was going to be overnight,” Bolden said of the change within the program. “I still think we have a chance to be really, really good. But, that’s a heck of a football team. On the back end in the secondary there as probably as good as anybody in the state. They fly around and they get after it. They’ve got great running backs and they blocked well upfront. And they play hard defensively. Hats off to La Salle. They’ve got a great football team.”