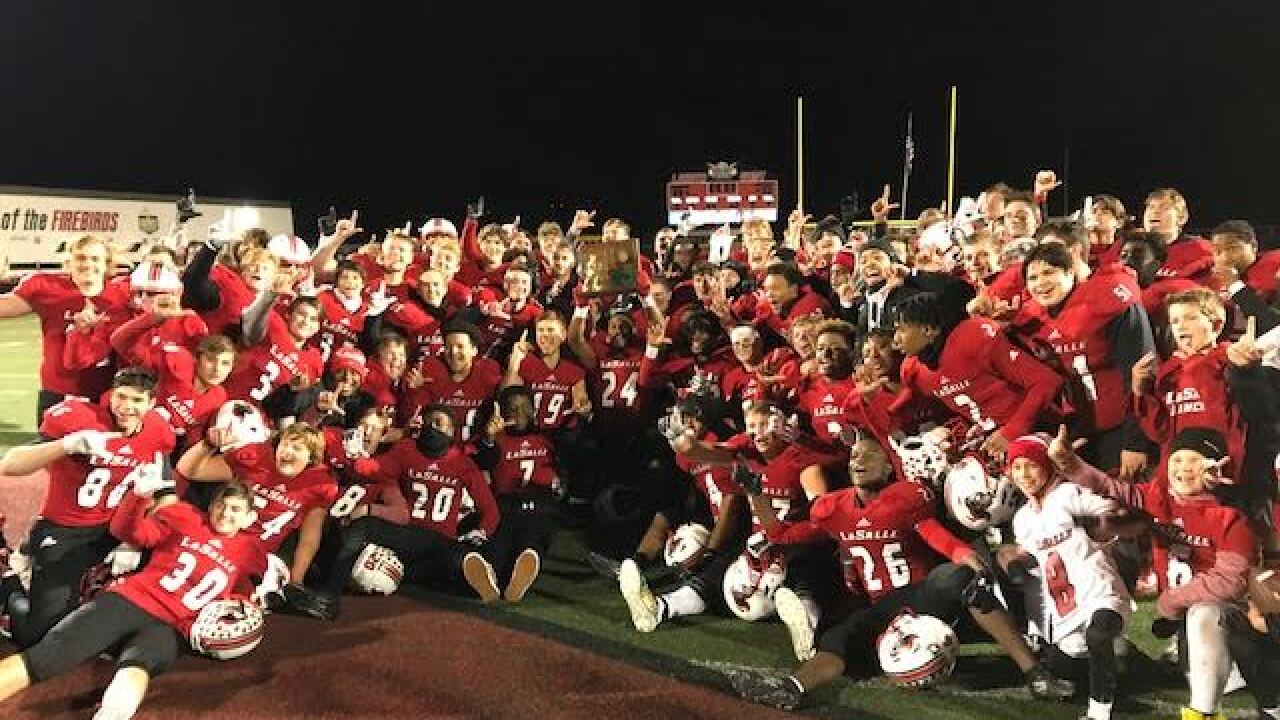 WEST CHESTER TOWNSHIP, Ohio — The La Salle football team became a regional champion for the fourth time in program history after its 45-8 Friday night win over Harrison in a Division II, Region 8 final at Lakota West.

La Salle (11-2) advances to the state semifinals Nov. 29 against Toledo Central Catholic (13-0) at a location to be determined later.

Although Friday night was the Lancers' fourth regional win, it was their fifth overall appearance in the regional final. The Lancers were also Division II regional champions in 2016, 2015 and 2014 — the same years they won state titles.

The regional title means everything to the team, La Salle senior running back/linebacker Cam Porter said after the game.

“It’s been a little while since we’ve had one,” Porter said. “We just knew that coming into this year we wanted to leave our mark on La Salle history so it’s very special to us and my teammates.”

McLaughlin liked how the Lancers started quickly in each of the first two playoff games and that momentum certainly carried over Friday night.

La Salle had 289 yards of total offense, including 234 yards on the ground. Junior quarterback Zach Branam had eight carries for 104 yards and a touchdown. He was also 6 of 8 passing for 155 yards and two touchdowns.

The Lancers struck quickly just 36 seconds into the game when Branam found junior Jaylen Norwood for a 39-yard touchdown pass connection on the next play to give the Lancers a 7-0 lead.

Branam found junior DeVonta Smith for a 39-yard touchdown pass connection to help give the Lancers a 21-0 lead at the 6:08 mark of the first quarter.

La Salle went ahead 31-0 at the 7:58 mark of the second quarter when sophomore Gi’Bran Payne scored on a 46-yard touchdown run.

Payne’s 95-yard interception return with 53 seconds left in the first half gave the Lancers a 45-0 lead.

“I was just thinking I had to score — I couldn’t get caught,” Payne said.

Kinnett was 18 of 32 passing for 229 yards and a touchdown Friday night. Young had seven receptions for 81 yards.

“The brotherhood that I have with all these seniors,” Kinnett said. “There is 20 of us and we’ve been playing a long time together. This is our 12th season together. We’re best friends. That’s the best part of this season. I will remember that more than I will remember the wins and losses.”

Harrison (11-2) appeared in the playoffs for the 13th time in program history.

“The senior class changed this program I think in a way for the better,” Harrison coach Derek Rehage said. “Just their work ethic and their hard work and setting new goals and expectations.”

Friday night marked the third time the Wildcats were in the regional final (2006 and 1988), according to Harrison athletic director Mark Meibers. Harrison, which made its fourth consecutive playoff appearance this year, was a Division II state semifinalist in 1988.