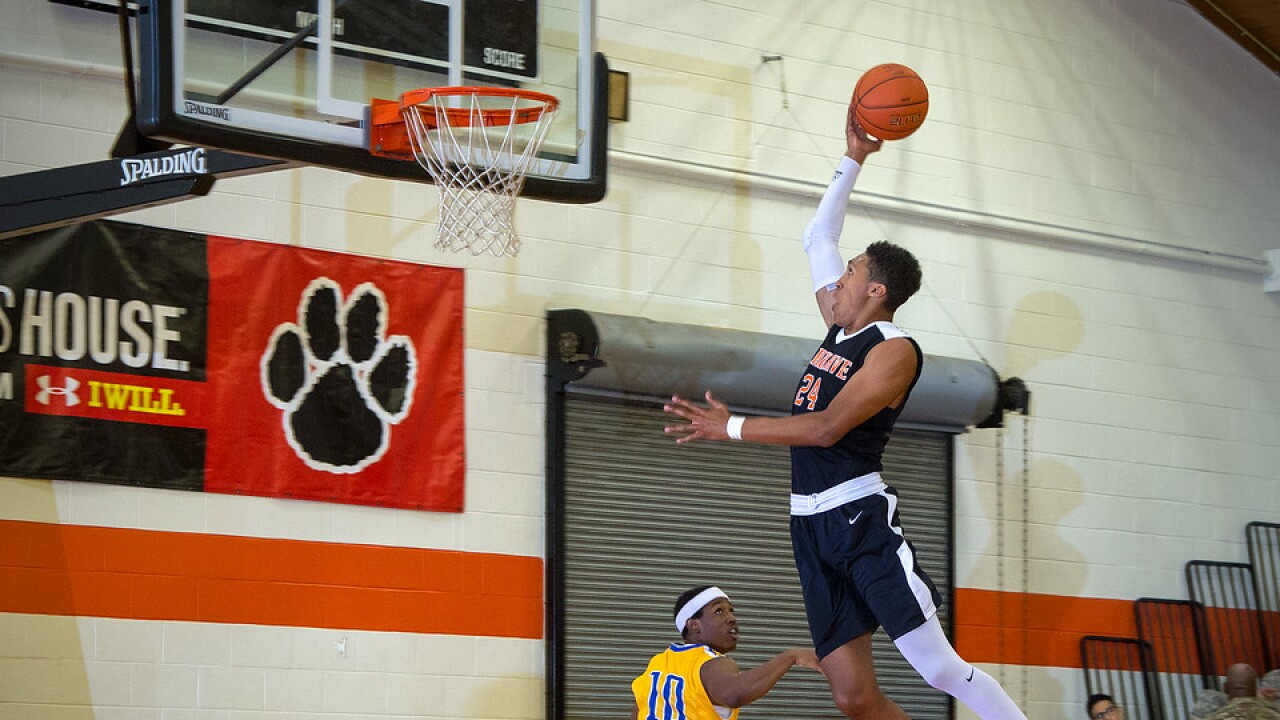 SYCAMORE TOWNSHIP, Ohio — Jeremiah Davenport needed about a month to get acclimated to the 6 a.m. wake-up calls at Hargrave Military Academy.

Inevitably, an officer would proclaim "reveille" three times each morning for him to rise and shine at the post-graduate school in Chatham, Virginia.

“I’m like, ‘Man, can you please be quiet?’” Davenport remembers thinking.

Eventually, the former Moeller basketball standout got used to the lights being turned off at 10 p.m. and rising eight hours later.

He also understood it was part of the process to help him learn a greater responsibility on and off the basketball court.

“Coming from Moeller I already had the mindset of becoming a man,” Davenport said. “That’s what Moeller prepared me to do – all the teachers, obviously coach (Carl) Kremer and all the assistant coaches from Moeller. Going to Hargrave, it just boosted that.”

The 6-foot-7, 205-pound wing Davenport signed with University of Cincinnati on May 14, becoming the first player to sign with new Bearcats coach John Brannen.

"It's just a basketball-entrenched family," Brannen said. "...I watched (Jeremiah's) career closely. When I got the (UC job) I knew he was somebody I wanted to take a look at and spend some time with."

Davenport is scheduled to start workouts at UC this week and likely will move onto campus next week with classes starting June 3.

Joining the Bearcats is a dream come true for Davenport, who grew up watching former forward Yancy Gates as his favorite player. As a youngster, Davenport had several UC shirts and a Bearcats duffle bag.

“Jeremiah, since I’ve known him, has loved the Bearcats,” Moeller coach Carl Kremer said. “He’d always be on the Bearcats side of the Muskie-Bearcat debates in our locker room. So I think it’s exciting for him. You grow up watching great UC teams play, and now he gets to be a part of that tradition. It’s really exciting.”

While Davenport received a great deal of attention on social media for his commitment to the Bearcats during his official visit May 11, the time he spent at Hargrave last winter was also beneficial, just a year after helping to lead the Crusaders to a Division I state title.

He averaged 16.5 points, 7.4 rebounds and 2.1 steals for Hargrave (35-3) and set the tone in practices and games, Hargrave coach Lee Martin said.

“He was tremendous for us,” Martin said. “He came in with the right mindset. He worked extremely hard. He was able to develop and keep improving on what Moeller did. What Jeremiah does really well is he brings a lot of energy. He’s got a big personality and he’s able to influence a lot of people around him.”

When Brannen called Davenport to re-acquaint after he accepted the UC position, the coach and player didn’t miss a beat. While at Northern Kentucky University, Brannen recruited Davenport, so they already knew each other well.

"He competes, he's tough and he's a winner," Brannen said.

Davenport had other options this spring. Virginia Tech, Kansas State and Duquesne were among other schools that offered scholarships. But he wanted to stay close to home so his family could watch him play.

Brannen took a private plane to Virginia to step onto the Hargrave campus earlier this spring for a meeting with Davenport. A week later, Davenport committed to the Bearcats after taking an official visit. He texted his brother, Josh Davenport, with the news.

Josh, who plays professionally in England, played with Winthrop (2013-17) after his Moeller days. Jeremiah used to tag along with his elder brother on unofficial visits to UC.

Martin said Jeremiah and UC realized it was a perfect fit.

“His game is such that I think he’s going to bring what UC fans want to see,” Kremer said. “He plays the game with such a relentless joy. And that’s kind of the Bearcat moniker. I am excited that he is going to get this opportunity.”